The I’ve Got Mine Club 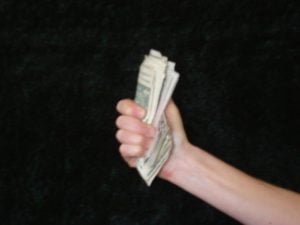 Ready to cut back on greed?

Have you heard of the I’ve Got Mine Club? It’s not a formal organization, per se, but a human behavior that leads to barriers and exclusions.

My dad first explained the I’ve Got Mine Club to me. The town I grew up in evolved from a sleepy mill town with a half-abandoned business district to a popular tourist spot during my childhood. It transformed from a community of predominantly blue collar families to rich folks from other places who restored dilapidated Victorian behemoths to posh upscale homes.

Many of us who’d been there longer (my family arrived in Port Townsend, WA in 1928) didn’t like these interlopers, with their money and their desire to make our town over in the image of wherever they came from. To Californicate became a verb. I experienced being snubbed because I was a local. It was presumed that no native of this recently polished gem of a town would have as much intelligence as someone from the better-heeled outer world.

Locals resented the Californicators, but the ironic twist came after the invaders settled in. They renovated their homes, infiltrated local civic organizations, started vanity businesses the way relocated city people tend to do. When they paused for breath and looked around, it suddenly occurred to them: there simply wasn’t enough of Port Townsend to share. I’ve got mine Now it’s time to close the gates. We’ll take your tourist dollars, but outsiders need not apply.

I’ve been thinking about the I’ve Got Mine Club a lot lately. In terms of America’s founding principles, it’s not the way we’re supposed to behave. Most religions don’t support the notion, either. It seems what we’re supposed to do when We’ve Got Ours is to help someone who hasn’t arrived yet. Pay it forward. How many of us have gotten to where we are without help from others?

When I was growing up, Washington State’s public school system lost a substantial subsidy from the timber industry. School levies were voted on every year to make up the short fall. None of the Port Townsend School District’s levies passed while I was in the public school system. Sometimes I’d overhear an adult say, “I don’t have kids. It’s not fair for me to pay for schools.” Other people simply felt they couldn’t afford more strain on already tight household budgets.

My classmates and I survived the funding drought, read from tattered text books, watched our extracurricular programs chopped down one by one. In spite of these deprivations, many of us made it to and through college.

These days, some classmates have retired and moved back to the home town. Those who can afford to, anyway. The I’ve Got Mine Club didn’t succeed in keeping newcomers away so there’s been a sharp increase in property prices. The school levies pass more regularly now, which is a benefit greater wealth can bring to a not-so-affluent community.

Recent rumblings in D. C. and the confirmation of a narrowly informed, out-of-touch Secretary of Education cause me great concern. Will the majority of us sit idly by and let an amateur gut our public education system? Will special needs students find themselves on the same chopping block as the extracurricular programs of my public school days? Why should I care? I don’t have kids. I’ve got my public school education and a college degree. Why support anybody’s needs but my own?

At our house, it doesn’t work that way. We vote “yes” on school levies and yes, we pay ample property tax. We want the people around us to receive a basic education, including an understanding of the founding principles of this country. Public schools are held to public standards, ones that apply to us all, and serve students regardless of race, gender, sexual orientation, creed, disability and all the other human variables. Where would you be without a public school education? Where would you be if the I’ve Got Mine Club raised the metaphorical drawbridge before your family had a chance to cross it? Admit it, you’d never make it entirely on your own.