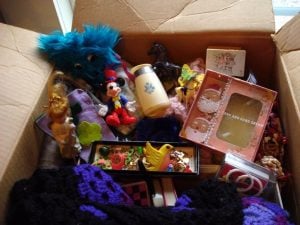 At this time of year it’s easy to slip into memories of being a kid. There’s always some kind of holiday program kids get roped into at school, whether they’re in orchestra, band, chorus or sentenced to a skit. It’s also a time of avaricious kid dreams. For me, this meant scouring the Sears Christmas catalog with special emphasis on the toy section. It was easy to fill up a whole sheet of notebook paper with items I just had to have and the corresponding page number.

Some of my dreams were realized. The Easy Bake Oven that cooked minuscule pans of cake with a light bulb. Was the baking time measured in minutes or hours? Lots of toys involved electricity back then, roughly the 1960s.

Some toys involved both electricity and water. Remember Creepy Crawlers? The process started with an electrically wired metal vat filled with water. Once the water warmed to a temperature that could poach an egg in two seconds flat, a mold with the shapes of bugs was filled from squeeze bottles of toxic-colored goo and lowered into the water. After a period of time that would defy most kids’ attention spans, the bugs were cooked and, once cooled, peeled from the mold for the purpose of scaring other kids. Incredible Edibles took an additional step toward insanity: not only was your life endangered by making insect-shaped creatures via the same method as Creepy Crawlers, you could eat the little buggers.

These grand memories of kid stuff are flooding back to me not only because of the holiday season. Yesterday, I opened a storage box marked Susan’s Kid Stuff. It had’t been opened since we moved to Prescott, WA, ten years ago, so why now? I was looking for something specific, a Nativity set. A teensy weensy Nativity set, to be exact.

It wasn’t there, a true disappointment. I just wanted to look at it, didn’t want to set it up for display because the figures are the perfect size for cats to choke on (you know they can’t resist the flavor of Wise Men). Honestly, it looked better in the original box and maybe that’s how it was meant to be shown. Each figure had its own niche in a tray of lime green plastic that had a clear plastic cover. The figures, too, were plastic but look like carved oak. I was seven or eight when I bought this with my own money, back when buying things with my own money was a sign of pending adulthood. It came from the Jack and Jill Store, a place you might remember if you lived in Port Townsend, WA, in the 1960s and 70s.

Sun streamed through the shop’s front windows that happy day, me counting out half-dollars and quarters and handing them the Mrs. Gunn, the proprietor, to purchase something that was not a toy. The Nativity set weighed light in my hand but was endowed with a spiritual gravity that made me feel obligated to be a good person for the rest of my life.

It’s the small stuff that resonates with me at this time of year. Yes, I’ll make at least one batch of the family fudge, a recipe handed down from Grandpa Abraham to Dad to me, and foist it on some unsuspecting person or persons of my acquaintance. We’ll hang a string of colored lights in the den. Holiday albums will move into rotation on the CD player. Stray memories will surface, like receiving a gift of lemon pepper that a friend had made when we were in junior high. It was not a kid gift, it was a real person gift and that was so cool!

Wishing you a holiday season that is real.