Kindness Bowl and the Person Inside 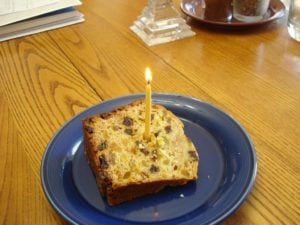 Kindness Bowl #3. Birthday cake, with candle. There are still 3 servings of Irish Plum Cake from November 1, 2019 in the freezer!

Sometimes- -okay, often- -life is full of challenging stuff. This month I’ve had skin cancer surgery, accelerated health issues with the oldest kitty, a crazy business transaction that fell through, Bruce’s and my wedding anniversary, and Spanish 121. It’s true that I love Spanish 121, but it’s a love that is accompanied by stress: frequent quizzes and exams and the daily rush to keep up with homework. At times like these, it’s time for Kindness Bowl.

You’ve turned into the Queen of Bowls!

True, Lily (she’s my inner fourteen-year old). First there was Advent Bowl to get me through the winter holidays and help me make them my own. Then came Epiphany Bowl because I really missed Advent Bowl. By January 6th I was pretty bowled out, but then, all of a sudden, I missed that daily prod to do something extra- -for myself and well as for others. And so, Kindness Bowl was born!

Give me a second to find my kazoo and I’ll play a fanfare.

Spare me your sarcasm, Lily (it’s her new superpower), and stop pretending you haven’t enjoyed Kindness Bowl as much as I have. Not only that, we’ve managed to get every single one of these things accomplished on the day drawn!

Yes, My Queen. But in case the whole world hasn’t read all our blogs for the past few months, please explain the “Bowl” concept.

Right as almost always, Lily. The official bowl is really a short crystal vase that belonged to my great-grandmother, Eugenia Eaton Abraham. To set up a new session of Bowl, I type out a number of activities, separate them from each other, fold up the slips and put them in the bowl. Each morning during the Bowl session I (with a secret ceremony!) select one item from the bowl, which is my task for the day. Why the suspense? To introduce a random element to the proceedings, which, for me, makes it all the more exciting.

Your Bowl games help you stay focused outside of yourself, too.

Yes, and that’s more important than ever since Bruce’s death. It’s far too easy to languish in my comfort zone instead of engaging with the World. My spirits and attitude improve greatly when I put myself “out there” and become part of something bigger.

Kindness Bowl started as a 10-day session, which I expanded to 20 days because random difficult things persisted in popping up this month. I repeated “Bubble bath” in the second round of tasks because, hey, it’s February! Also, when I first drew this one on February 14, the same day I had a ticket for the local performance of “Murder on the Orient Express,” I realized that I could take a bubble bath after I got home at the shockingly late hour of 10 PM. This was vital to my re-programming as a widow: the realization that I can do things at times of day that might cause the 4-legged kids to look at me funny. Yes, I feel the pressure of their questioning eyes, but hey, I really am free to do things in a non-routine way!

Bubble baths are under the self-care category. Anticipating spring (which is surging forward this year, unlike last year when Walla Walla was buried under snow for 6 weeks), I included “Clean out front planter” and “Clear debris from back yard.” More critical was #6 “Visualize a happy Spring.” I took a few minutes to articulate happy anticipated events that would come my way in my journal, much of it involving what would happen in the garden but also what would happen in the natural world and how I would be a part of that.

That’s the one I’ve liked best, so far.

I liked that one, too, Lily. The one that made me feel the best was “19. Take food donation to the animal shelter.” It felt good to help in the mission of caring for homeless animals and there was an unexpected bonus. As I pulled out of the Blue Mountain Humane Society parking lot I was overwhelmed with gratitude that I have the means and the emotional reserve to feed, house and care for my aging 4-legged kids.

Grizelda, in particular, is having serious health issues- -renal failure, hyperthyroidism and seizures. I’m able to treat her at home with subcutaneous hydration every 3 days and twice daily medicine, but she is definitely in decline. Last night she had a severe and lengthy seizure, legs thrashing violently followed by stillness, though still conscious. I stayed alongside her, petting her and speaking softly until she recovered. And she did recover, is back to her usual routines this morning- -eating, drinking and hovering near the heat vents. As long as she’s game and shows that she is enjoying life- -including hours of sunning herself in the back yard- -I’m game, too.

And she still gives the boy cats Hell.

Let’s not go into that in front of our readers. And readers, feel free to start your own Bowl game! It’s a simple thing, can involve spending money (donations, buy yourself a cookie) or not (walk- -rain or shine), can involve reaching out (write someone a letter) or reaching in (listen to Worry CD), and taking the first steps on projects you have, for no good reason, delayed (research new window treatment for living room, 2020 garden schematic). It’s become my go-to DIY self-help routine, and most of the time it’s fun, too.

Side benefit: you’re starting to not suck so much at having fun.

A lot of that has to do with the Bowl games, Lily, but honestly, it has even more to do with you.