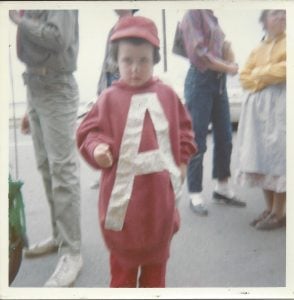 The author as Alvin the Chipmunk, 1963

Yesterday, I missed something big. The Pet Parade, one of the highlights of the Port Townsend, WA, Rhododendron Festival, happens the third Thursday in May.

The Pet Parade is a charming sea of chaos. The staging area in front of the fire station is jammed with dogs, cats and other domestic animals, variously controlled by costumed children and adults. Judges wade through the contestants, marking their score sheets and awarding ribbons. Leashes tangle, cats hiss irately from decorated cages. When the largest dogs begin to growl and the smallest children cry, you know it’s time for the parade to start.

The middle-school band leads the march down Lawrence Street, their renditions of two or three easily identifiable songs played with vigor and something touchingly close to accuracy. A crowd of onlookers (three and four people deep) cheer from the sidewalks, shouting out to friends and family who pass by. The spacing between categories (Large Dogs, Small Dogs, Festival Theme, Exotic Animals, etc.) starts out even but soon devolves into a ragged mess.

Everyone you’ve ever met seems to be there- -retired teachers, co-workers, ex-spouses, cousins you haven’t seen for years and former classmates who’ve made the trip from Seattle or Bellingham especially for the event.

I don’t remember when the Pet Parade started, but it’s been over fifty years. My sister and I took special pride in the parade because our grandpa was the parade chairman. Not only that, our dad ran the Kiddies Parade! We were banned by parental decree from taking our dog, Clover, in the Pet Parade (Mom: “Poor Clover would be so embarrassed!”) but were allowed to participate in the Kiddies Parade, with this caveat: Dad objected to us winning anything as it impaired his ethics as chairman. One year he grudgingly allowed us to place third in the Historical category; there were only three entries.

We had fun regardless, milling around in a mass of costumed kids and gradually being wrangled behind category signs (mostly carried by Boy Scouts) for judging. My favorite memory dates from 1963, when I was Alvin the Chipmunk (“Cartoon Characters”). A girl in the same category, dressed as Bugs Bunny, told me she’d had her stomach pumped out in the hospital because she drank gasoline by mistake. Stories like that stick with you.

Are these parades truly for kids, or are they for those of us who remember being kids? Both, I think. By offering children a way to actively participate, an audience is built for the future.

Local festivals are a prettily packaged means of tying communities together, a piece of magic woven from tight budgets and the work of die-hard volunteers. In Port Townsend, you can tell a local if they refer to the Rhododendron Festival simply as “Rhody.” Lawn chairs are set along the Grand Parade route days in advance. Parking spaces evaporate in response to a week-long schedule of events, everything from the Hair and Beard Contest to the Rhody Run marathon. Past Rhody queens and princesses are assembled for a generation-spanning group photo.

Rhody is continuity. I hope your local festival does the same for your community!