Look it up in the Dictionary 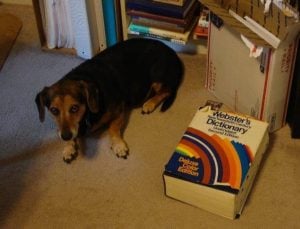 Vocabulary building with a dictionary the size of a small dog

Remember when you were a kid, toiling through homework at the kitchen table? How many times did you look up and ask your Mom or Dad “How do you spell __________ (insert word of choice)?” If your parents were like mine, the answer never varied, no matter the word. What did they say? Okay, everybody, on the count of three: one, two, three. . .“Look it up in the dictionary.”

This reply is so consistent between families I think they must teach it at secret parenting school. Either that, or it’s universal in human DNA.

About a million blogs ago I embarked on a project, shared with you, my readers, to expand my vocabulary. In the earliest pages of the letter “a” I got fixated on the word abattoir. Strange to say, I had never understood before that this word means “slaughter house.” I grew excited about the rhyming possibilities and practically fainted over pairing “abattoir” with “boudoir.” That was so much fun I’ve decided to take a break from writing about real life and its challenges and return to my vast Webster’s New Twentieth Century Dictionary, Unabridged Second Edition © 1979. Not so “new” these days, but. . .

Let’s get crazy and advance to the letter “b.” Upon further inspection, it’s evident why the word “boring” falls under this letter.

Moving on, I see cacafuego. My 1979 Webster’s politely defines this word of Spanish origin to mean “a braggart.” However, if you break the word in two, it’s easy to infer a rude literal meaning. Don’t go asking your parents how to spell this one or you’ll wind up on restriction.

“Daffadowndilly” I will dare to define as a word poets use when they want to write “daffodil” but need more syllables for purposes of rhythm and meter.

Then there’s “Edenize”: a phenomenon unlikely to happen in my back yard.

Turning to “f”- -no, it’s not there. I checked between fucivorous (eating or subsisting on seaweed) and fucoid (belonging to or resembling seaweed). I guess that word we’ve all seen scraped into playground dirt by some kid’s heel and scratched in the wall of just about every public toilet stall fell between the cracks.

The examples above are just a tiny sampling of how you, too, can expand your vocabulary. Daring vocabulary hunters can learn just about everything they need to know about chemistry and botany by exploring dictionary entries under “x” and “z.” Me, I’m more of a centrist. Let’s see what’s new and exciting in the middle:

M: Morven, n. a mythical kingdom ruled by Fingal: described by Ossian in his poems.

Follow-up question: did Ossian use daffadowndilly in his poems?

N: nemophilous, a. having a love for or living in the woods.

Yes. But only if there’s enough light to grow daffadowndillies. I’d ask Mom but you know what she’d say.

Guess I’ll have to look it up.