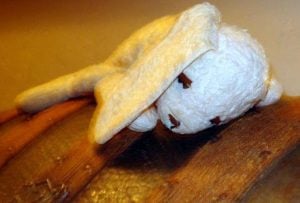 Over the years, the Bruce and Susan Matley household acquired many artifacts. Most of these came from family members, through death or downsizing. But one item remains unexplained to my satisfaction. It’s cute, it’s cuddly, it’s floppy. It’s the Matley Boys’ Bunny.

Ah, but which Matley boy was the original owner? Bruce claimed it was Ken, so when brothers Ken and Randy were visiting in December I took a moment to ask them: whose bunny? It was hard not to ask, as the bunny was clearly visible at the time, lounging on top of my Great Grandma Patterson’s 19th century trunk (courtesy of Uncle Dennis William Sullivan, died 2001).

Brother Randy, who arrived first, believed the bunny was Bruce’s. I’ll admit that Bruce’s possession of said bunny has always struck me as incriminating, but even so . . .

Ken, who visited at a later date, said the bunny had been in the family for as long as he could remember. He, too, believed the bunny belonged to Bruce. As Bruce was eldest and Ken is the next in line this made logical sense, but . . .

In an effort to trip Ken up, I asked him why the bunny has only one ear (NOTE: the bunny far predates Matt Groening’s “Life in Hell” comic strip and does, in fact, have a telltale hole where a second ear would be). Ken weighed my question for several seconds before confessing that, though he didn’t recall the exact details of the amputation, the bunny had been involved in many pillow fights.

Poor Bunny. In many places his fleece is threadbare. Viewing his seams through a magnifying glass, it seems possible that he was handmade; either that, or he was revitalized with several home repairs. On further investigation I see a frayed bit of ribbon on Bunny’s left rear foot, the remnants of a manufacturer’s tag. He must have been store-bought to begin with.

Bunny’s fringed felt eyes are permanently shut, as if he is perpetually asleep. His nose, a mere piece of frayed yarn on his snout, might have been made of something sturdier once, something plastic or metal that was sewn on. His thread mouth, shaped like an upside-down capital T, turns up ever so slightly, as if he hardly minds his age and decrepitude.

Perhaps one of Bruce’s first cousins remembers the advent of the bunny. They all remember when he was a baby, or, at least, a toddler. Maybe it was a gift from one of them, or from their parents? Perhaps this blog will spark a distant, happy memory and someone will send me the scoop? 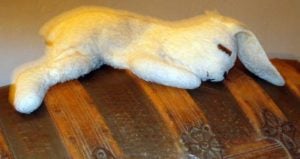 Another view of Bunny.