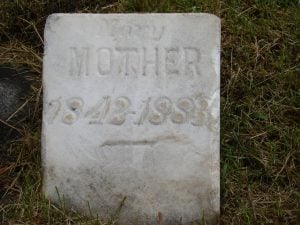 For as long as I can remember, I’ve liked cemeteries. Laurel Grove is one of my favorite spots in Port Townsend, WA, the best place to have some quiet time away from tourist-flooded downtown on a fine summer day, ideal for reading and reflection. Many of my family are interred there. It’s soothing to be near them and think about what advice they’d give when something’s troubling me.

When we moved to the eastern side of Washington State I visited the cemetery in Dayton, WA, 17 miles from where we live. Many of my family are interred there, too, though more distant relations. The one who’s been there longest, Mary Abraham, died December 23, 1885 according to a beautifully engraved headstone. No date of birth is given.

Or did she? There’s another headstone with her name, a smaller, older, simply engraved one that reads “Mary, Mother, 1842-1883.”

Mary Benton Abraham was my great-great grandmother. In 1851, when she was a child, her family emigrated from Cass County, Michigan, to Oregon Territory. The man she eventually married, Charles Abraham, was English and came to America in 1844 when he was seventeen years old. In 1852 he (with a wife and child who both died on the way) also emigrated to Oregon Territory.

Mary and Charles have fascinated me since we’ve moved to this part of the state, where they settled in 1864. What does a writer do when something fascinates her? She writes a story. At least, she tries to.

I knew it would be a novel-length work before I started. In the first draft, Charles was the main protagonist. Why? What little I knew of his story was ripe for dramatization- -English emigrant, wife and child die in the Oregon Trail cholera epidemic of 1852, marries a young woman in newly-minted Oregon State in 1860, moves to Washington Territory in 1864 to build a new life with his wife and growing family. There are no pictures of Charles. I envisioned him as tall and wiry, like his son Ray Dean who was my great-grandfather. In the 1852 of my imagination, Charles Abraham looked very, very sad.

And he was. The Charles Abraham of my creation proved too depressing to write about! After thirty pages of draft I realized that Mary’s story would be more fun to tell, though I had fewer details about her. For example, when was she born? “Ca 1843” is what genealogist Liz Carson of Dayton, WA, could surmise, not unreasonable since that would have made Mary 16 or 17 when she and Charles married. Liz gives Mary’s date of death as December 24, 1883.

Alas, the small amount of information I possessed was in conflict! Did Mary die on December 23 or 24, in 1883 or 1885? Was she born in 1842 or 1843? I wrestled with this dilemma, the lack of a date of birth troubling me the most. Some folks in those days penned births, weddings and deaths in the front of the family Bible but much went unrecorded, especially, I hate to say, about females. I set aside my wondering and took matters into my own hands. My Mary Benton was born May 15, 1841! It was an important decision, perhaps the most important one in the book that follows Mary from ages nine to seventeen. As events unfolded- -the trip to Oregon, homesteading in Linn County, Oregon Territory, meeting Charles Abraham for the first time- -it was crucial to know how old she was and what someone that age could do in the world of the story. Author Jeannine Atkins, in her excellent piece “The Missing Locket, An Invitation to Wonder” (Poets & Writers, Jan-Feb 2016), wisely compares writing historical fiction to a rescue mission. Too many people disappear without a trace. Mary Benton Abraham deserved more than two conflicting tombstones to tell her story.

With little to go on, I started reading. Biographies of Oregon Trail pioneers and interviews with the same. Oregon history, including transportation in 1850s Willamette Valley (much of it by river). Anything I could find about wheat farming, schools, the Homestead Act, pre-Civil War politics, fashion, newspapers, Mid-19th Century American art, weddings, the treatment of Indians, churches, banks- -you name it! I learned that Cass County, Michigan, where Mary was born, was an Underground Railway hot spot and decided how this would affect her family’s political views. I gave her parents, siblings, a rag doll, friends, heartbreak, diligence, a little bit of a temper and a life out west.

At present, my manuscript, Mary Benton, Pioneer Girl, is under consideration with two publishers. In my pitch, I describe it as “Little House on the Prairie” meets “Jane Eyre.” If it’s published one day, I hope you’ll pick up a copy and find out why.