Modeling and the Person Inside 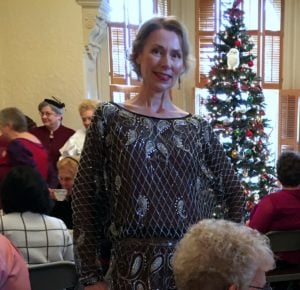 Kirkman House Museum Tea and Fashion Show, December 8, 2019- -modeling in the here and now. Full-length view of THE DRESS to come. . .

Lily (my inner-fourteen-year-old) was psyched about this for weeks. Finally it happened! Last Sunday we did a modeling stint at the Kirkman House Museum Tea and Fashion Show!

Kirkman House Museum is a beautifully restored example of luxurious 1880s residential architecture, situated in downtown Walla Walla. https://www.kirkmanhousemuseum.org/ Last weekend’s show was one of two they host each year, in December and May. The theme was holiday dresses and evening gowns. My gown dated from approximately 1930, when, according to LIFE magazine, “the boyish form became the vogue.” Taller, flatter- -yup, I’m in!

The dress I wore is extraordinarily gorgeous: full-length, drop waist, dolman sleeves, heavily decorated with beads. After the fitting a few weeks ago, my shoulders ached from the weight of it. But it can’t be beat for glamour! Also, cool beyond cool, it is my dress, given to me by Mom’s former neighbor, Gloria George, who once owned a posh clothing store in San Francisco.

Gloria has since passed on, but three of the four evening gowns she gifted me were worn in the fashion show. They are now on permanent loan to the Kirkman House Museum, an institution known for their ability to maintain and preserve their extensive collection of vintage clothing.

Happy dresses, and happy we who wore them. Plus, volunteer hair stylists and makeup artists magically provided each of us with the proper vintage “look.” I was even given a pair of brown pointy-toed pumps, exactly the right size, the chief organizer adamant that my black character shoes would not suffice with a brown dress!

Wow, this is amazing!

Lily said this about a dozen times during our fashion plate date, which stretched from 10 AM to 2 PM. Hair arranged in finger waves, makeup styled after a 1930s glamour photo, dress fastened up the back with metal hooks and thread eyes by an honest-to-goodness dresser, waiting upstairs for the show to begin. Seventeen of us in all from teens to seventies. Not my usual day, to put it mildly, spending a few hours with no other purpose than looking pretty. Fun, chatting in our excited group of women looking their absolute best.

As show time neared we were lined up in order of appearance on the grand staircase, one per step. Someone took a group photo and we were photographed individually just prior to entry. Move slowly, turn, extend arms to show off the magnificent sleeves, enjoy the ooohs and ahhhs of the patrons, thirty-six of them, total, seated at well-provisioned tea tables in perfectly restored rooms. A sellout crowd, booked far in advance. Back to the hallway, waiting for the grand parade of all of us at the end. Applause. Finis.

As it happened, that very morning Advent Bowl had yielded the following slip:

Great, I thought, just great. How am I going to do that when I have a commitment from 10 AM to 2 PM? But this is the beauty of Advent Bowl: if it seems impossible, I have to be creative. At first I thought maybe I could invite a friend from the fashion show, but the models scattered back to their normal lives as soon as they’d changed and my Kirkman House friends would be busy for hours, cleaning up.

And I was starving!

Me too, Lily! On the way home I stopped at Clarette’s Restaurant, a venerable Walla Walla institution that features comfort fare. Scoping out the dining room as the waitress led me to a booth, I chose a couple engaged in intense comversation over their coffee and told the waitress I would like to anonymously pick up their tab. The “friend” would be two strangers with a secret friend they didn’t know!

The whole idea left me grinning, like the reformed Scrooge when he sends the biggest goose at the poulterer’s to Bob Cratchit. Though I’d changed into my regular clothes my hair was still glammed out and my face that of a stranger with So. Much. Makeup. It was surreal, like being onstage, as I chomped a dinner salad and a huge BLT to the last crumb. The waitress brought me the bill. I grinned like an idiot as I scribbled down a big, fat tip and my signature. The couple was still working through their oatmeal, bacon and eggs when I left so my “cover” remained intact.

Tell them about the other Advent Bowl stuff we did this week!

Monday: # 6. Get yourself 1 cookie from John’s Wheatland Bakery. Lily picked a huge Cowboy Cookie. John, himself, rang us up, talking himself through each step on the many-layered menu of his cash register. At home, the Cowboy Cookie went down well with coffee.

Tuesday: # 11. Read “A Christmas Carol.” Easily done in two evenings, out loud, for the 4-legged kids!

Wednesday: # 2. Write someone a letter (watch your mailbox, Kirsten Skrinde)

Friday: #24. Something special to honor B. B for Bruce, naturally. Right now I’m listening to one of his favorite CDs, Bob Seger Ultimate Hits. He wanted this for Christmas a few years back. Bruce felt a connection to Seger as he, too, had been a young man pursuing his craft (acting) in Detroit many years ago. A donation to Blue Mountain Humane Society in honor of Bruce will go in the mail today. Surely other observances will occur to me as the day moves forward, simple acts that give me special, separate time to think about my beautiful, brilliant, kind, entirely human and as fallible as anyone else sweetheart. 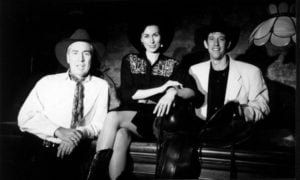 From 1999, publicity photo for the Nevada Slim Trio, with Bruce Matley and Bill Ham. My first show with Bruce was December, 1999.

Being a writer with an extensive background in acting, I like to make things up. Some of my inventions succeed better than others, but I have to say, Advent Bowl has been incredibly helpful in keeping me exploring inward and looking outward as all the hard anniversaries of last December pile up. We learned Bruce’s prognosis on December 11th, had an episode with a Fentanyl patch that landed him in the ER the night of the 12th, heard how close the end was after a surgical procedure on the 14th couldn’t be completed due to unanticipated complications. No food. No chemo. Almost no time.

At the risk of repeating myself, last year I was so stressed out, worn out and shocked by the time Bruce died that the fact that it was Christmas was virtually meaningless. I put together a little celebration for myself with music, flowers, chocolate and wine that had serendipitously arrived from friends. Mostly, I did a lot of laundry and tidying after a week of home hospice, tried to catch up on my sleep and waited until December 26th to let the world in general know what had happened.

Don’t worry, I’m here with you.

Thank you, Lily, it’s an incredible gift to have your youth, curiosity and wise critiques reminding me that life is good. This year, I feel the holidays and it isn’t all a bad, sad feeling. In addition to mourning Bruce and- -I can’t help this, being a mere mortal- -reliving the worst parts of last December, I am also rediscovering they joys of doing new things and making the holidays my own. Because it’s really about reaching out and being a part of something bigger than myself. That is pure gold.