Mold and the People Inside 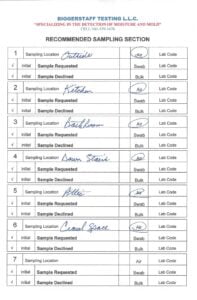 Places in my house where mold was tested. Three of these require remediation.

In recent years I’ve noticed several houses in Walla Walla have moss on the roof. Deferred maintenance? Certainly, but I sense something else is also in play: more moisture in the atmosphere. Most people think of southeastern Washington (if they think of it at all) as being an arid region. Well, kind of. But this past week I’ve been doing a little dance with mold.

I’d rather be tapping.

Me, too, Lily, and fortunately we can do both. Tap class on Monday nights, and the dance with mold- -let’s just say I hope to change partners soon.

Most of the moisture that’s led to this dance resulted from domestic aquatic events (flooding septic system, leaks under the kitchen sink, a shower door that offers free passage to about 10% of what comes out of the spray head). Whatever the cause, a spot by the shower on the bath/laundry vinyl has turned from off-white to gray, and the flooring under the kitchen vinyl near the sink feels a bit spongy after the last leak (the third in the four years I’ve been here).

As I’m prone to respiratory allergies and have been to Urgent Care a couple of times this winter with respiratory complaints I figured it was time to stop assuming everything medical that happens to me is COVID-related (not!) and look for a structural cause, instead.

Last Friday a mold inspector from Pendleton, OR, came to the house and took samples- -bathroom, kitchen, basement, crawl space, attic and a control sample from outside- -and sent them off for analysis. The results came back on Wednesday. To my surprise, the bathroom and basement had very low rates of mold. Not so for the kitchen, crawl space and attic.

And the crawl space is right underneath where we sleep!

I know 9. Yuck, right? Fortunately, none of these three areas are so bad that we are at a dangerous level of health risk, but they do need remediation.

They need to be fixed.

How is that done?

It’s a combination of scrubbing, applying mold killing chemicals, and, in the case of the attic, removing all the insulation before scrubbing and treating, then having a re-inspection before new insulation is put in place. There may be some structural repairs and modifications to make, too, like replacing some sub-flooring in the kitchen and installing more vents in the soffits- –

The underside of the overhangs off the eaves. More vents will help airflow in the attic, which should reduce mold.

A mold remediation specialist is coming to make an assessment on Monday. Then he’ll write up a proposal and we’ll decide what to do from there.

It probably will be, Lily, but it’s important to keep the house structurally sound and healthy for us to live in, too. When we get that taken care of, I’ll look into replacing some of our natural gas fueled appliances with electric, starting with the cook stove. U. S. foreign policy has been urging other nations to move away from fossil fuel cookery (coal, especially) as a global health concern. It only seems right, in my opinion, that we should do this at home, too.

Isn’t cooking with gas what gourmets like to do, though?

So I’ve heard, 9, but my cooking isn’t nuanced enough to tell the difference. I grew up using electric appliances so that’s my domestic comfort zone. If it’s also better for the planet that’s an incredible bonus!

Returning to the subject of mold, there’s more than one definition of the word. Why don’t we whip up a few frozen treats in these? 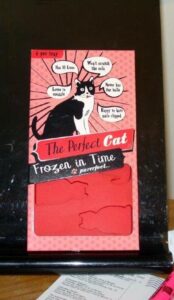 Mold doesn’t always have to be something bad. . .

Wishing you a weekend filled with the purr-fect kind of mold!