Mom and the People Inside

As you may suspect, Lily (my inner 14-year-old), 9 (my inner 9-year-old) and I (their outer 61-year-old) have a lot in common. One thing we have in common, right from the very start, is a person. That person is Mom, and today is her 95th birthday.

Wait a minute, isn’t she 40-something?

From your own perspectives, both of you are right. Here’s a picture from Christmas, 1967, a few weeks after we turned 8: 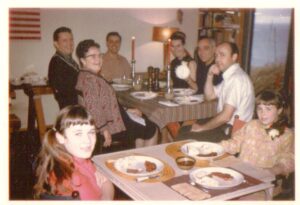 Christmas breakfast 1967. Mom is third from the right at the “Adults” table. . .

That’s her all right, with the chignon and glasses.

Correct, Lily. And did you know that Mom’s parents, Grandpa Denny and Grandma Mary, made it all the way to 99 and 101, respectively?

That doesn’t surprise me, because we were at Great Grandma Patterson’s 100th birthday party last year.

Right. Given her family’s longevity I guess I’ve always expected Mom to make 100, at least. Even now she’s part of a super-elite age group- -in the US, people 95 and older represent about one-tenth of one percent of the total population.

Mom was born in Republic, WA, just south of the Canadian border, November 20, 1925. When she was 2 years old her family moved to Port Townsend, WA, where she grew up, graduated from high school, and married Dad in 1945. They lived in Seattle for several years, Mom working as an accountant while Dad took advantage of the GI Bill and got his law degree. A little later they moved to Pullman, WA. Dad was on the faculty at WSU (then WSC). Mom worked in Pullman, joined a painting group and made lots of friends. That’s one of her secrets to living a good life: keep making friends along the way.

They returned to Port Townsend in 1956. Dad started his own law practice and at first Mom was his secretary. After a dispute about regular monthly billing of clients (Mom for, Dad against) they made a different arrangement. Besides, Ann arrived in 1957 and we came along in 1959, so she was busy. 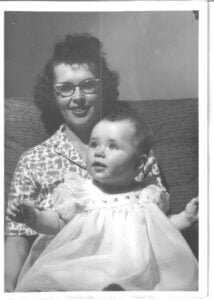 As soon as Ann and I were both in school Mom went back to work, this time at her friend Donna Daubenberger’s clothing store.

That’s when we learned to make Hamburger Helper.

It’s everything you need in one box to stretch a pound of hamburger into a meal for a family of 4. The product was launched on the West Coast in December, 1970, according to the General Mills website. Lots of women with kids joined the workforce around that time. I’m pretty sure lots of our classmates learned how to make dinner, too, to help out their moms.

I think of Mom as Mom. I mean, it’s hard for me to picture what she’ll do, once we grow up and go to college.

She’s never been one to let moss gather, 9. You probably remember all the different community groups she was active in, sometimes on boards or advisory committees. And she and Donna founded a nonprofit organization called Trees for Port Townsend in the 1970s. They planted trees up and down the streets all around town, and worked on renovating historic landmarks, like the Bell Tower. Somewhere in there they won a national arborist award and were voted Port Townsend Citizens of the Year.

That’s all very noble stuff, but it doesn’t sound like much fun to me.

Being active in the community is something that Mom enjoys, Lily, but I know what you mean. You’ll be glad to know that she joined a ladies tap group when she was in her 50s and stayed with it for over 30 years. You would have gotten a kick out of seeing her in the annual O’Meara Dance Studio recitals! They had gorgeous costumes and looked totally classy. In 2006 she started performing in the musical theater group, too! She had lots of great numbers and knocked it out of the park with “Rose’s Turn” from Gypsy. She only quit because the teacher retired. 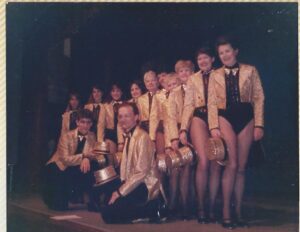 Mom, at the front of the line for “Chorus Line,” O’Meara Studio recital 1980s.

For many years Mom and Dad went to Hawaii for the month of November.

Yes. They rented a condo on Oahu, went to the beach, met up for drinks and meals with friends who were there at the same time. She went a few times after Dad died, too, and invited me over the year of her 80th birthday in 2005. We had a blast! 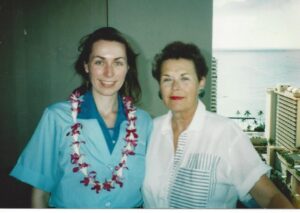 With Mom in Hawaii, late 1989, her sixty-fourth birthday. . .She and Dad were fantastic hosts!

95 is a pretty big birthday. Is Mom doing something special to celebrate?

Well, you know how it is right now, 9, with the pandemic. It would have been nice to throw a big party, like we did for her 85th but large gatherings are off right now.

Good idea, Lily. And we do have something fun planned for this evening. Ann arranged for all of us to do a Zoom wine tasting and hors d’oeuvres-making event. Two wines and lots of fancy ingredients! The recipes serve four, so the two of you can join in, too. But no wine, not yet.

Fine with me. Wine tastes icky.

We won’t go into how you know that right now, Lily. We’ll focus instead on wishing Mom a Happy 95th Birthday!