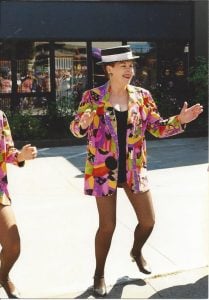 Margie Sullivan was born in Republic, WA, a small mining town near the Canadian border. When she was two or three her parents moved to Port Townsend, WA. She went through the public school system and also learned how to tap dance. During World War II, she and fellow tapper Mary Okert performed in USO shows at Forts Worden, Casey and Flagler, the military triangle that protected the entrance to Puget Sound. When Glenn Abraham, Jr., returned from the Army Air Corp (a stint that included time as a German POW), they married and took their place in what is now called The Greatest Generation. Like many young couples at that time, she worked and he attended college on the G. I. Bill. When he’d finished law school, they moved to Pullman, WA, where he taught at (then) Washington State College and she continued to work. She also joined a women’s art group and the local chapter of the League of Women Voters (she was the only Democrat in the membership). Eventually they moved back to Port Townsend where he set up a law practice and she stayed home with my sister and me until we were both in school.

Mom went back to work when I entered kindergarten, and that’s part of her secret. She loves to work and to serve on committees, and eventually she returned to tap dancing. Tap is a natural for Mom, because in addition to her great aptitude and interest, she’s got killer legs and a radiant smile. For a few years I danced with her. When friends attended the annual recital the invariable comment was, “Oh, yeah, you did a good job. But your mom- -wow!”

Her smile isn’t limited to tap dancing, and that’s another part of her secret. Try it out in the mirror and see if you don’t automatically look ten years younger. She’s also great at making friends of all ages, and have I mentioned great genes? There’s amazing longevity in Mom’s family.

When Mom shows up in my stories she’s easy to spot: the smile, amplified by bright red lipstick; the knack of looking at least a decade younger than she really is; the easy, friendly way she talks to people. If needed, the Mom character will blow her top. I’ve seen this happen in reality, not often (except for a multi-year stretch when I regularly resisted piano practice), but that makes it all the more effective.

Mom and I haven’t had a perfect relationship (the very concept is an oxymoron) but on balance we’ve done well together and there is an anecdote I’d like to share. When I was in kindergarten, the teacher gave me low marks in coloring as I sometimes worked outside the lines. Mom stormed up to school and told Miss Unidentified, “You will not stifle my child’s creativity!” I’ve always been a crappy visual artist (and still color outside the lines), but, with Mom’s early encouragement, I’ve enjoyed a lifetime in the performing and literary arts.

I’m glad Mom has time for us Friday evening. On Wednesday she’s going to a dinner party, on Thursday she has Birthday Club and Friday afternoon friends are taking her to lunch. This is not an unusual schedule for her and she still entertains at home a lot, too.

If you don’t know by now how to lead a long and happy life, go back to the top and read this again.