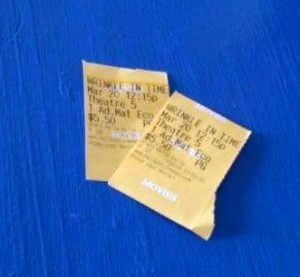 Movies: a bargain at twice the price!

This week Bruce and I did something way out of the ordinary. Maybe I should say way out of our ordinary. This week, we went to a movie.

Big deal, you might say. Yes, in fact it was. The last time we went to a movie was February, 2011. Seriously. It was the remake of True Grit at a Walla Walla multiplex. That’s where we landed at 12:15 on Tuesday, March 20, 2018. First day of spring. First time we’d been to a movie in seven years.

Seven years! The world has been turned on its head and back a billion times in the last seven years. It wasn’t supposed to happen this way. We’d planned to see Lincoln in December of 2012 but two days before our movie date the Sandy Hook Elementary school shooting happened. Spirits were low and I, personally, was not willing to go into a public space and provide some crazy person with a soft target.

Time got away from us. Time. The new movie A Wrinkle in Time was what got us out of Prescott, WA and into the theater seats. I’d given an advance warning: “When this movie comes to town I’m going to see it.” I’d issued a similar warning about Florence Foster Jenkins in 2016 but we missed it out of sheer inertia. That was a tough year to feel inspired, especially toward the end. Ditto for all of 2017. But, with a strange wave of hopefulness, I decided 2018 was not/is not going to be like that. This year we stretch! This year, we discovered that the Tuesday 12:15 PM matinee is $5.50 for seniors, also that both of us are seniors. It felt risqué, disappearing into the dimly lit multiplex in mid-day, like going into a bar for breakfast.

A lot has changed in movie theaters since 2011. New films are in digital format now. Tons of trivia questions, trite interviews and local ads bombard the screen before the feature begins. Almost everybody has figured out how to turn off their cell phones when the movie starts. Everything before the feature is WAY TOO LOUD. And in the feature itself, is it just our senior ears or is half of the dialog whispered these days?

I’m no movie critic, but we really enjoyed the show. Like almost everybody, I’ve read A Wrinkle in Time and liked it. I decided in advance to let the movie be its own work of art, since it’s such a different medium than a book. With movies, someone else gets to decide what things look and feel and sound like. The joy of imaginative heavy-lifting is no longer yours. Movies move. They are visual, aural and sometimes olfactory (I once saw the John Waters movie Polyester in Odorama). With big screens, surround sound and incredible special effects, movies are immersive in a way that’s beyond your control. So I let books be books, and movies be movies.

Since A Wrinkle in Time (by Madeleine L’Engle) was first published in 1962, the world has been turned on its head and back a million-billion times. I thought the director and screenwriter did a good job of updating the world of the story while keeping the important pieces intact. If you think this is wrong, consider the 1939 movie musical The Wizard of Oz. This rendition was miles away from the L. Frank Baum book on which it was based, but I’m guessing people remember the details of the movie far better than they remember the book. Munchkinland was ALL BLUE in the book, remember? People, animals, grass, trees, every bit of it. Dorothy was not a redhead. The Tin Woodman- -he started off as a normal flesh-and-blood man named Nick Chopper and then. . .oh, go back and read it if you want to know the rest! One thing for sure, in the book he did not prance around on the Yellow Brick Road singing “If I Only had a Heart.”

Back to 2018. The grown-up actors in A Wrinkle in Time were good, but the child actors were terrific, especially Storm Reid’s nuanced portrayal of Meg Murry. The optics were gorgeous (except too many characters had an identical shade of pink on their lips). The message of the film, in my opinion, was nicely tuned to the current times without losing the sense of the book.

We saw the movie, we liked the movie, we’ll go to another movie sometime, maybe even this year. For a long time we’ve deprived ourselves of entertainment. There’s always an excuse- -forty mile round trip, other things to do, too depressed by the “real” world. We’ve allowed ourselves to obscure the benefits of entertainment as if they didn’t matter, like it’s not important to let in fresh images and information to balance the daily barrage of work, pets, home projects and the (ugh) news. Like it’s not helpful to leave the everyday world for a while. Like the everyday world won’t still be there when we get back.

So, hey, go to a movie! Or a play or a concert or a reading. Get up and dance. There’s a big world out there. You don’t have to make it on your own.