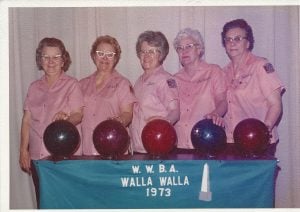 At least we aren’t moving bowling balls! Grandma Gretchen Abraham, second from right, with her team in Walla Walla, 1973.

Hi out there to all of you in the normal world, it’s Crazy Moving Week! This is the week when many normal conventions are set aside for the abnormal. Here are the highlights:

Eat it or move it!

Finding Food from the New House

In the spirit of Lewis & Clark, who passed this way in 1806, I forged a new trail. The inventive route to groceries passes through 10 unexpected miles of gorgeous Oregon wine country. More efficient is south on Sturm, west on Bryant, south on Fern, west on Tieton (this route discovered in reverse on the return trip).

Where are my yellow and green earrings? Oh yes, now I remember. They moved to Walla Walla two days ago with the rest of the folks on the earring stand.

Used to be change of address happened solely at the post office. This time we had to change internet service providers as well. I have a fairly modest number of online accounts but even so, changing e-mail addresses for each and every one of them is a whopping pain in the wazzoo. Oh, that reminds me, better change the e-dress at Facebook. . .

Yep, they’re at both houses. But pretty soon, we’ll only be at one.

Akin to herding cats, but with more yowling. The tuxedo cats moved on Wednesday. One of them (the so-called feral) spent 2+ “spa days” at the vet’s, getting caught up on vaccines, having his claws trimmed and decking a collar and ID tag for the first time (while under sedation). His pal, the cuddliest 17-pound tuxedo cat you could ever hope to meet, joined him in the “bachelor quarters” (an attached storage room separate from the rest of the house) Wednesday night. The tigers (aka striped tabbies) moved on Thursday, as did the dog, as did we.

I made one extra trip to the new house in advance of the final relocation party to check on the tuxedo cats and unload another Subaru full of boxes. The “bachelor quarters” have half a wooden floor raised over gravel, the perfect spot for kitties to hide under. After three heart-stopping minutes of calling “here kitty kitty” Friday ambled out. I had to lay on the gravel with a flashlight to spot Piebald- -actually, only his tail- -sticking out from a chink in the sub-flooring in a dark, dank corner. FYI, we have since seen the entire cat, though he still isn’t speaking to us.

It must be a law of nature that the longer you pack, the weirder the contents of each successive box get. At first it was all books. Then it was all clothes, followed by all cat and dog food and paraphernalia. We at last achieved packing nirvana yesterday—cutlery, candles, unread magazines, a lone sock, the Bowflex instruction poster and a leaking plastic water glass. Where, oh where, do you put that box for ease of unpacking?

Moving the Rest of It

Wonderful neighbors lent their aid and a horse trailer to help us move the big stuff on Friday, plus rounding up two STRONG YOUNG MEN to assist. Cats and dogs were confined to either 1. Back yard (dog) 2. Large bathroom (perfect size for 2 tigers and all their trappings) or 3. “Bachelor quarters” during the unloading process. A wonderful friend who lives six blocks from the new house provided lunch for the moving party, with plenty of leftovers to see us through the next few days.

I bought it May 8, in anticipation of a moving-related emergency, like getting stuck alongside the road between Prescott and Walla Walla. The macaroon went uneaten for ten days because every time something stressful happened I asked myself is this really as bad as it gets? I finally ate the macaroon last night (it was delicious). It wasn’t stress that prompted me but the realization that our move, for the most part, was done.

I love the new house and yard. I love the old house and acreage. It’s interesting to feel the shift from being more in one to more in the other. The old house gets a professional cleaning Monday, carpets cleaned Tuesday, pictures taken and a listing agreement signed to “go live” by May 25th (or, given Murphy’s Law, a little later). We’ll still go to Prescott most days to keep up the property until someone incredibly lucky makes a pleasing offer on our fine little house.

I’m sure it will be a moving experience.