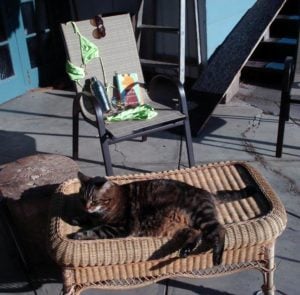 Multitasking need not be dull. Prelude to a warm-weather multitask. With Hoosegow Matley.

Multitasking. The word does not appear in my 1974 Merriam-Webster dictionary. Resorting to Wikipedia, multitasking is:

. . .an apparent human ability to perform more than one task, or activity, at the same time.

Did you notice the skeptical tone of this definition? Multitasking was once believed to increase workplace efficiency. For example (again from Wikipedia):

. . .taking phone calls while typing an email and reading a book.

Originally, the term multitasking did not refer to human achievement. It was first used to describe the capabilities of an IBM System/360 in 1965. (For those of you who didn’t exist, didn’t know and/or didn’t care in 1965, an IBM System/360 is a family of mainframe computer systems.) It’s easy to understand that computers can efficiently and effectively carry out several activities at one time- -otherwise, what would be the point of having them? For humans, however, there is a mitigating factor.

As it turns out, the human brain can’t fully focus while multitasking. When multitasking, tasks take longer to complete and the humans performing those tasks are more prone to error. Bummer if this happens at work, right?

So I’ve been thinking, maybe multitasking is better used at home.

Take this morning, for example. It was beautiful outside, mostly sunny and just over 60 F at 6:30 AM. The coffee was ready. Instead of retreating to my cold-weather spot in front of the living room fireplace I settled into a patio chair outdoors. It was a handy spot for watching the oscillating sprinkler and referring to my cell phone every few minutes to determine when it was time to shut it off and move it to a different location. A cat (Hoosegow, to be exact) hopped into my lap moments after I sat down. I proceeded to pet the cat.

Drinking coffee, monitoring a sprinkler, watching the time and petting a cat- -now that’s multitasking! The critical point, I believe, is to choose several things that are 1. Easy to do 2. Low stakes if you somehow screw one or more of these things up.

When next the weather turns cold I will embark on another multitasking experiment- -sipping homemade cocoa laced with brandy while soaking in the tub and listening to Portland-origin orchestra Pink Martini’s 1997 CD Sympathique.

It’s important to keep your multitasking activities compatible. Cutting 2-by-4s on a table saw while blow drying your hair is not recommended, nor is brushing the dog in mid-summer while eating a s’more. It’s also important to mind your manners when multitasking. Today, for example, I’m meeting a batch of cousins for our semi-annual lunch at a Mexican restaurant. Talking during lunch is certainly okay; talking while chewing, not so much.

I wish you every success in creating life-enhancing multitasks. The weekend is the perfect time to experiment. Find that sunny swimming pool, raise your beverage of choice and read the juicy novel that’s been in your bedside stack for months. Because you never know when time will suddenly prove of the essence.