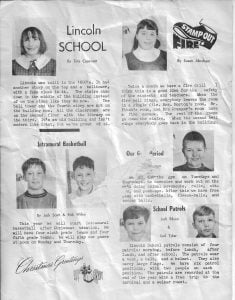 Dateline: Fourth Grade. Sure, I could have covered what everybody else was covering but I opted to go rogue. I called it “Stamp Out Fire” and it made the December Port Townsend Police Digest, sponsored by Kiwanis.

Do I remember it like it was yesterday? Well, not quite. But I do remember the outfit I was wearing the day the police department secretary came to school to take my picture. Lucky me, in white turtleneck and brown fake-leather jumper. I’m here to tell you, that jumper was hot and sticky no matter how cold it was outside. But one must suffer for beauty, which is code for Mom still cut my bangs.

Twice a month we have a fire drill. I think this is a good idea for the safety of the students and teachers. When the fire bell rings, everybody leaves the room in single file. Mrs. Morton’s room, Mr. Fitch’s room, and Mrs. Granger’s room have a fire escape. The rest of the rooms go down the stairs. When the second bell rings everybody goes back in the building.

I was in Mrs. Morton’s fourth grade so we drilled via the fire escape. There are two things I remember about the fire escape. One, that in an era when girls weren’t allowed to wear pants to school unless it was snowing, there was a well-founded concern about boys seeing your underwear on the way back up. The other: one amazing afternoon a three-piece sixth grade rock band set up on the fire escape to play a concert. “Concert” was then defined as three songs, one of which was probably “Louie, Louie.”

Fellow journalists from Lincoln School wrote about the history of the school building (Tina Casavant), Intramural Basketball (Jack Scott & Rick Wiley, who were also members of the memorable sixth grade rock band), school patrols (Jack Edson & Earl Tyler) and the teachers at Lincoln (Bill Hobbs). There was also the piece “Our Gym Period” but the author’s name has worn away over time.

I suppose our journalistic rivals at Grant Street Elementary were tapped for a different issue of the Port Townsend Police Digest. There probably wasn’t enough space to feature us all at one time. The December 1968 issue is four 8 x 11 ½ pages, with major features about a new youth center next to the Uptown Café (penned by Kathy Embody), the return of Larry Grewell, Sr., to the police department (no byline given) and the Jr. High Christmas Program by Luanne Montgomery. The entire police department staff is pictured on the back.

Does anyone out there in Readerland know if police departments still do this kind of outreach? Do officers still come to schools to talk about crosswalk safety and saying no to drugs? I hope so. When you’re a kid, it’s helpful to see that police officers are real people, not just some semi-scary adult in a uniform. It also puts officers in touch with a part of the community they might not see in the regular course of business.

And, hey, if it sparks that first writing gig, what could it hurt?