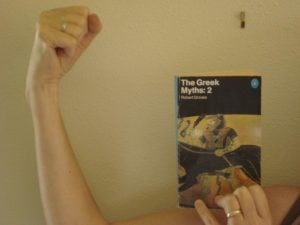 When writing about Greek immortals, I sometimes flesh out characters with what I call Myth Taken Identity. This week I’m studying Heracles (sometimes called Hercules), a character in Beyond Big-G City who is boringly two-dimensional in the first draft.

My favorite sources for learning about Zeus, Hera and the like are Edith Hamilton’s Mythology and the scholarly two-volume Greek Myths by Robert Graves. Graves, particularly, has a lengthy section covering the life and Twelve Labors of Heracles, a Hero born of the union of Zeus and a mortal woman. Hera, insulted by yet another of Zeus’ infidelities, harasses Heracles for the rest of his mortal life. Oddly, Heracles means “Hera’s glory,” which makes me wonder more than ever about Hera. . .

How did ancient Greek mythologists define a Hero? Heracles, a big, strong boy, was trained in physical combat and the use of arms du jour. When he killed his music master over a disagreement, he was sent to a cattle ranch (code words for “reform school”?) to cool his heels until he came of age.  He made a big splash with King Thespius by killing the Lion of Cithaeron who was attacking the king’s herds. King Thespius, afraid his fifty daughters would otherwise make poor matches, insisted they all have children by Heracles. Work, work, work. Only one of them (I’ll call her the smart one) resisted Heracles’ advances. The rest of them all had boys, including two sets of twins. Also of note, Heracles flayed the skin from the lion and wore it, using the head for a helmet.

To summarize a Hero at this point in the myth:

A big, strong male who can and does kill people and animals who annoy him, sleeps with every girl available, fathers only boy children, dresses like an idiot and, depending on how well he cured the lion skin, probably smells pretty bad.

Still with me? There’s more:

Hera, vexed by Heracles’ excesses, visits madness upon him. In a rage, he kills his sons by his lawful wife, Megara. When he recovers his sanity and seeks absolution, the Pythoness of Delphi, an oracle, points him toward a king named Eurystheus who gives him Twelve Labors to perform as penance. Heracles more or less runs around the known world killing, stealing (cattle in particular), abducting young women and choking three-headed dogs into submission. Apparently this was considered attractive behavior, because he was able to raise armies of followers whenever he needed them.

My ancient Merriam-Webster dictionary (“The only one with 1970 population figures for U. S. cities of 12,000 or more” and sexist by today’s standards) defines a hero as 1. A mythological or legendary figure of great strength or ability 2. A man admired for his achievements and qualities 3. The chief male character in a literary or dramatic work. Oddly, there is no definition 4. A crazy-ass cattle rustling homicidal maniac running around in an animal skin.

As I develop Heracles, who eventually becomes immortal and marries a goddess, I’ll use the myth in the context of how it makes him feel in the present. In 2025 AD, the year when Beyond Big-G City is set, most of the gods view his past with distaste. Poor Heracles, doomed to spend eternity as the glorified security guard of Mount Olympus, with Hera for a mother-in-law. Sometimes being a Hero doesn’t pay.

Lately, our world seems crazier than ever. There’s so much conflict, hate, killing and day-to-day nastiness between people that it’s hard to hang on to my natural optimism. It’s tempting to believe that a hero or heroine can save us from every problem that plagues humankind. We endow our public leaders (both actual and wannabes) with mythic qualities no human can possess. The real heroes live within us. There are many ways- -common courtesy, looking at people as individuals and not as a group, considering what’s best for everyone and not just your own personal biases- -to make the world a healthier and more harmonious place. Go ahead, be a hero. I won’t stop you.