New People, New Things with the Person Inside 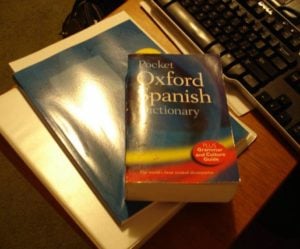 New learning! I wonder which giant this “pocket” dictionary was intended for?

This week, we’ve met a lot of new people who are much closer to Lily’s age than to mine. My classmates in Spanish 121 range from late teens to, perhaps, late 20s. Perhaps. Mom has assured me I look young for my age but. . .in this setting, thirty is old! Fortunately, none of my new friends have treated me like a relic- -yet. They must sense there’s a fourteen-year-old simmering inside.

The first thing that Lily, my inner fourteen-year-old, and I have to report about the first week of Spanish 121 is We did It! So far we have perfect attendance, have completed all the assigned homework and have taken the first weekly quiz (not our finest academic moment but it’s nice to have room for improvement). This is encouraging, as before class on Monday I was nervous about going to the right place (even though I’d scoped it out last week), having the right textbook (I didn’t remove the shrink wrap until I’d verified this against everyone else’s textbooks) and following the class with reasonable comprehension.

Should we tell them about the quiz?

Why not? For some reason, it took me by surprise that the quiz was (wait for it) in Spanish! I’d done the homework, which the quiz was to serve as proof of, but. . .Why had I expected to get a question in English asking me to explain something about Spanish in English? My quiz taking ability was temporarily lost in the translation. But, while Lily and I are embarrassed about choking at the critical moment, we’re also looking forward to improving our performance next week. Right, Lily?

Atta girl! I’m enjoying the class and know that learning Spanish requires me to set my mind in a certain direction. I have not found that direction yet, but given the way I’ve learned new things in the past I’ll keep chipping away at it until the Aha! moment(s) arrives. This week, my major stumbling block (aside from the quiz) is defaulting to pronunciation of Spanish words using rules from two long-ago years of high school French.

Speaking of high school, on Wednesday I attended a high school basketball game for the first time in forty-three years. I became interested in this as my friend Cheryl’s grandson is on the Walla Walla High School Freshman B Team. I like basketball as a spectator sport- -it’s quick, it’s exciting and I understand the basics of the game. Lily, of course, was thrilled to be around kids her age.

As if I could forget, Lily. You know, you’re influencing me in a good way. When Cheryl asked me what I thought of the game I grinned and said “It’s really fun!” She laughed and said, “Well, you are fourteen, after all.”

I wish people wouldn’t mix us up like that.

Whereas I kind of like it. And it works to your advantage, too, Lily. Lots of people who read our blogs have become fans of yours.

Back to the game- -the kids played much better than I thought they would. Lots of good ball handling, nice shooting and strong passes. They clobbered the visiting team by more than thirty points, though their opponents had some good moves, too. Plus, the coaches made sure the less experienced players got a lot of game time in the second half. Watching so many sets of long, skinny arms and legs moving up and down the court, I felt like I’d found my tribe.

Some of them were kind of cute, too.

Not for me to say, Lily, but I’m glad you’re having some fun this week. We’ve been working hard, incorporating the new class and homework into our life while keeping on schedule with writing projects, taking care of the four-legged kids and getting the housework done. Not to mention feeding ourselves. Sometimes, at the end of the day, I just don’t feel like making a real dinner. This weekend I’ll make a batch of lentil burgers and put some in the freezer for nights that I. Just. Can’t. Plus, it will use up the half-dozen hamburger buns I bought months ago. Cooking and eating for one (well, one on the outside and one on the inside) can be tricky.

I liked the raspberry sorbet we finished this week.

Tell me, am I the only person in the world who takes two weeks to finish a pint of Haagen Dazs? It’s not that I don’t like it (otherwise, I wouldn’t have bought it), but I don’t like it every day, and I don’t like more than the recommended serving. In six decades, my sweet tooth has retreated from day-to-day life.

Are you sure, Lily. What’s your all-time record for chocolate truffles eaten in one sitting?

Nice try. That was four in one day, New Year’s Eve. Strictly for celebratory purposes, we were order to do so by the friend who gifted us the lovely selection from Bright’s.

Me, too, Lily. But for now, our motto is “all things in moderation,” because it feels like we are doing all things. The third new experience on this week’s list is attending a rehearsal of the Blue Mountain Sweet Adelines. I’m not clear, exactly, if we’ve been invited to join or even to audition, but one of their members invited us directly so we’re going to check it out.

Building a new life is an interesting, challenging process. It’s taken me a while to open up and pursue new adventures, and Lily’s been an incalculable help in getting me inspired and motivated.

Most days I ask Bruce to help me out with all of this. So far, he’s come through. I know he would want me to keep moving forward through a satisfying life. Right now that’s taking extra effort and self-examination, plus a pinch of spontaneity.
So I guess my New Year’s resolution is this: to meet people and get to know the ones I already know better, to learn things, and to discover (or rediscover) what it is I like to do, in addition to writing.