Now and Then: Student Protest 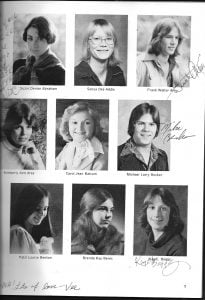 Student protest: more than hairstyles have changed since my high school days.

This week across the nation students at approximately 3,000 campuses walked out in protest of gun violence in schools. At some schools the groups were large; at others, a solitary protestor made their stand. I was proud to see so many young people believing in themselves, believing that their voices can bring change to gun legislation and school safety. The energy and creativity in these student-driven events was impressive. In my home town of Port Townsend, WA, high school students assembled in the lower field on campus and formed a huge human peace sign.

The March 14, 2018 protests sparked a memory of a much earlier student protest in Port Townsend. Look way back to the 1960s. Hundreds of kids gathered uptown, on Lawrence Street, to protest___________ (fill in the blank without peeking at the next paragraph).

It wasn’t about the war in Vietnam. Or women’s rights. Or free love. It was about taxes. In particular, an amusement tax the city had recently imposed. The one movie theater in town was closing, under the assertion that the new tax would be unsustainable for their business. A movie was being shown that night, for free. I’m pretty sure it was the 1967 Sonny & Cher pic, Good Times. (According to Wikipedia, the thinly plotted vehicle for a bunch of songs lost over a million dollars at the box office.)

I remember the movie as being better than that, but what did I know? I was seven or eight years old. What made a stronger impression on me was the official protestors, a trio of teenage boys dressed as the Spirit of ’76 with strong overtones of tie dye. One of them may have had a drum, one a fife, the third a flag of some kind. They also had a chant. I remember the catchy ending to this day:

Now we’re sitting in the gutter

With nothing to do

Take off that tax

The doors of the Uptown Theater opened and kids streamed through. Every seat was filled, a virtual madhouse of underage energy. In retrospect, I’m surprised the building survived. And, on the big screen, Sonny & Cher at the height of their fame. You can see the movie in its entirety on YouTube- -for free! https://www.youtube.com/watch?v=pyy1izipwJQ

When I reflect on the contrast between this week’s protest and that decades-ago night at the Uptown Theater I feel incredibly sad. Is there even an opportunity for kids to be kids these days? Sure, I remember plenty of terrible things from my school years (including sexual assault), but I was never afraid to attend school because I thought I’d be murdered there.

The good thing about the present situation: adults won’t listen to each other anymore, but maybe, just maybe, they’ll listen to kids.

The beat goes on.