Of Tests and Toilets 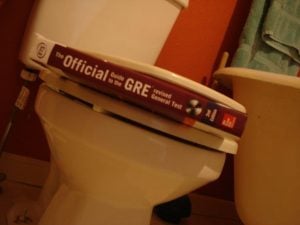 Tests and toilets. The stuff of nightmares.

My nightmares, anyway. I’m often plagued by both of these monsters when the sky is dark and sleep falls upon the unsuspecting.

I’ll start with tests. Surely you’ve had a test nightmare, yourself? It’s a variation on the showing up at school nightmare, either 1. in your pajamas 2. naked or 3. unable to make it to that one class for an entire semester and the final exam is- -right now!

My most recent test nightmare was type 3. I was taking a three-hour test, some kind of post-college entrance exam or possibly a test for a desperately needed professional certification. It was administered in a gray concrete building, starkly furnished with metal chairs, long folding tables and exam question booklets. Not many were taking the test, but everyone there was someone I knew from. . .somewhere. I had a pencil. A huge clock was on the wall. Suddenly, only twenty minutes of the three hours remained. I’d only finished one of four test sections. Panicked, I approached the proctor, who sat behind a barred glass window, like a bank teller of old. She told me I had to get a Form W-2 to finish the exam, and I could get one across town, at the University.

“But it will take me more than twenty minutes just to get there!”

The proctor shrugged. Not her problem. After that, I couldn’t find the place to turn in the test booklet. Time ran out. It was as if I’d never been there.

Having a test nightmare is one thing, but why one with these details? In the past, my test nightmares have been set in a high school or undergraduate college environment. The only explanation I can come up with is anniversary anxiety. In October and November, 32 years apart, I sat for some doozies.

In November, 1984, days after my 25th birthday, I sat for the 3-day, 17-hour CPA exam. The exam was administered in the Exhibition Hall at Seattle Center, a cheerless concrete structure illuminated by banks of florescent tubes. Hundreds, maybe thousands of small folding tables and metal chairs crowded the vast floor, one for each CPA aspirant. I saw none of my classmates from the University of Washington School of Business Administration but two young women in their 20s that I knew from high school sat at tables nearby.

The exam was grueling. It ran Wednesday through Friday. On Wednesday night, Mom called to ask how the first day went. Overburdened with accounting trivia and fried with exhaustion, I said, “If I don’t pass this time I am never taking this *^&!!! thing again!” It wasn’t just that I’d studied 250 hours over the three months leading up to the exam, I was also working full time (fortunately, for an accounting firm that gave me a paid week off to take the exam). I lived through the experience and passed all four sections by an incredibly fine hair.

So much for test anniversary anxiety #1. The second real-life episode was last year, Monday, October 17, when I sat for the GRE. This is a 4-hour test, an entrance requirement for some MFA creative writing programs I was applying to. I wrote extensively about the overwrought security measures surrounding the GRE (you can read about it here:  https://www.susandmatley.com/official-blog/a-matter-of-security/ ). My main concern (other than my inability to calculate the volume of a cylinder, which, as we all know, is crucial to studies in creative writing) was whether, at age 56, I’d survive 4 hours without a bathroom break. It turned out fine, though in spite of pretty good scores I wasn’t accepted to any of the programs I later applied to.

If your mind is clear, you probably just noticed how toilets may have been introduced to the “can’t-get-it-done” test nightmare. These nightmare toilets are far different from regular toilets. Number one (no pun intended), they are desperately needed. Number two (likewise), they are either a. extremely public b. unbelievably filthy, or c. have a sheet of plastic wrap stretched under the toilet seat and across the bowl. Sometimes, these sinister porcelain gods have a combination of horrible characteristics. The imagination runs wild, yes? So I’ll leave the topic of nightmare toilets, for which my mother will be grateful.

Nightmares, whether of tests, toilets or something even worse, have a knack for piling on bad thing after bad thing after bad thing. As a fiction writer, this puts me in mind of the advice throw rocks at your protagonist. If your lead character’s life has lapsed into predictability and the plot is sound asleep, call on your nightmares to liven things up. No, you don’t have to send the hero or heroine to a prison-like exam room or a filthy public toilet, but, within the circumstances of their imagined lives you can turn up the discomfort level from zero to eleven with a few well-placed obstacles.