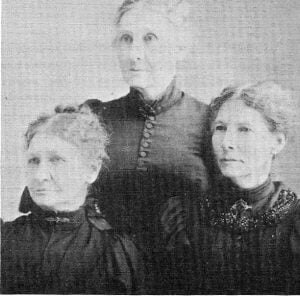 Matilda Sager Delaney (right) with sisters Catherine Sager Pringle and Elizabeth Sager Helm, 1897, at the time of the 50th commemoration of the Whitman Massacre

They say you can’t teach an old dog new tricks (whoever “they” are). I’m not the oldest dog on the block, but I’ve roamed the earth long enough to be set in my ways and comfortable with established routines.

Moving is a great way to shake things up, and this week I’ve had enough room in my brain to start pursuing things I’ve wanted to do for a while. Like volunteering at Fort Walla Walla Museum. Their “Living History” program is irresistible to someone like me who loves research, writing and performing. On Monday I met with the program organizers and have been invited to join the Living History troupe for the 2019 season! I’ve committed to portraying Whitman Massacre survivor Matilda Sager Delaney, born in Missouri in 1839 and orphaned on the Oregon Trail (along with her four sisters and two brothers) in 1844. The Sager children were adopted by Marcus and Narcissa Whitman, missionaries who’d lived and worked in Oregon Territory (near what is now Walla Walla) since 1836.

If you’re familiar with Washington State history, you may recall the Whitmans’ missionary work did not end well. In November, 1847, the Whitmans and others at the mission, including the two Sager boys, were killed by the Cayuse they had come to serve. It was, in part, retribution for a measles epidemic, brought by white settlers who had stopped to winter at the mission that year (the Cayuse had low immunity to this disease and died in numbers far greater than the whites). Other factors were involved as well. There are many books on the subject, my favorite being the two-volume work by Clifford M. Drury, Marcus and Narcissa Whitman and the Opening of Old Oregon.

At this point, if I were speaking to you in person rather than through a blog, my husband would say, “Don’t get her started about the Whitmans.” So I’ll hold off, except to say that I developed an affinity for Matilda Sager Delaney while researching my (as yet unpublished) historical fiction novella, The Small Box. She left a detailed autobiography that, in addition to documenting a highly interesting personal history, makes it clear she was both cynical and open-minded.  A Survivor’s Recollections of the Whitman Massacre, written in 1920, is still available in facsimile and makes for interesting reading.

Fort Walla Walla Museum sponsors a wide variety of programs throughout the year. For details go to:

How does an old dog pep up the process of editing a manuscript? I’m in the midst of wrapping up my final draft, the one I will use for agent and editor queries, for my middle grade novel The Luck of Lily Adams. Over the years I’ve become a stickler for reading my manuscripts out loud (yes, every word) when honing a final draft. Why? It’s a great way to discover awkward sentences and phrases, ones that are hard to say.

My new trick is starting at the end of the manuscript and reading out loud backwards- -not the words, but reading the last paragraph first, “advancing” to the paragraph before that one, and so on. This might sound crazy-making, but it’s extremely helpful in examining the merits of each sentence and paragraph on its own. Typos and omitted words are easier to find, also extraneous phrases that slow the story down. The secret, I think, is that reading backward removes plot as a main point of focus. It’s harder to miss errors when the story isn’t pulling you forward.

Have you ever used a convection oven? We had one on the Prevost (bus) in our touring days. A couple of times I tried making baked goods with this appliance and found the results less palatable than using a conventional oven. Maybe this had something to do with it being a combination convection oven and microwave? Anyway, I was reticent to bake with the convection oven that came with the new house. After learning the control panel well enough to operate it without the aid of reading glasses, I’ve had incredibly good luck. The baking is much more even than with a conventional oven and the baking time can be cut by 25 or 30 percent!

New Tricks on the Horizon

These days, I’m an old dog on a roll. This fall I’ll investigate the world of self-publishing and set my strategy for getting my middle grade historical novel, Mary Benton, in print. I’m also studying up on fava beans, sometimes called broad beans. Given Walla Walla’s hot summers, these might be tricky to grow here but I’m determined to give it a try next spring.

It’s never too late to learn something new. Rumor has it that lifelong learning is good for brain health, whether young dog of old.

So, pup, what’s new on your horizon?