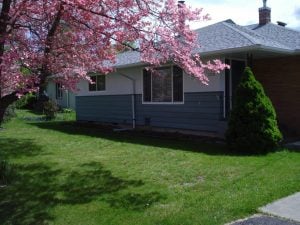 Of necessity, this week’s blog will be short and sweet. We’ve worn out the road between Prescott and Walla Walla, toting our stuff to the new house. If I had to guess, I’d say we own 40,000 pounds of books. I realize book collectors don’t usually quantify their holdings by weight but if you’d spent the better part of a week packing and hefting them, you probably would, too.

The good news is, we are nearly done with the books. Also bookcases, small tables, houseplants and hanging clothes. I’ve been shaking dust off dresses I haven’t worn in years, maybe decades, maybe ever. Dust is the unifying theme of our relocated possessions thus far. You would think we never dust but it happens once a week. Except who would think to dust off hanging clothes? And there’s that really high shelf of the built-in bookcase and . . .

The old house was built in 1895, the first part, anyway, so this 1948 house we’re moving to is modern by comparison. This means lower ceilings and bigger rooms. We added a master bath to the old place nine years ago and have grown spoiled. The new place doesn’t have a master bath, but the master bedroom does have a private deck. It’s not hard, trading off one good thing for a different good thing.

The clothes dryer in the new house is gas. I nearly fainted when I read the warning against putting anything that’s had gas spilled on it, even if washed, in a gas dryer. Will cause explosion and death. Not explosion and possible death, but “death” death. So wish me luck.

What’s the one thing that’s guaranteed to happen when you’re moving? The car starts making funny noises, of course! We took the Subaru into the shop this morning- -right after we shooed an escaped donkey from the neighbors’ place (old neighborhood) off the road and back onto their property. There are no donkeys at the new house. At least, none that I’ve seen.

While it’s inconvenient to be down to one vehicle, we are extremely grateful for our valiant 2001 Xterra and its continuing mission to pull a 4 x 6 cargo trailer up and down the weary road. The dog and cats have mastered the “not again” look when we pack up and head to town. But. . .

The old house is starting to look bare.

Big moving day (the day when the big stuff is moved) is May 18. After bed, couch, dresser, Kitchen Queen and safe get moved, the 4-legged family members will really have something to look upset about. Into the carriers and kennels they will go, believing our destination to be the veterinarian’s office (because it always is).

I hope they are pleasantly surprised.