Olympians and the People Inside 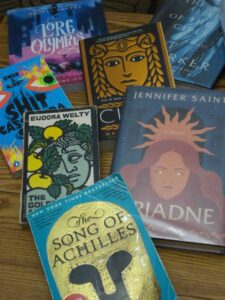 Some new spins on Olympians and their doings- -to name a few. . .

Pivot! At approximately 3 PM Sunday I removed my Nellie Gilliam Day hat and laser-focused my attention on my upcoming presentation, “Myth-Taken Identities: Using the Greek Pantheon in Fiction.” There is, of course, a simpler way to say Greek Pantheon: Olympians.

You mean the people who live in the state capital?

Probably not, 9, but you never know where those clever immortals will show up in my books and in the books of others. Here’s one you’d enjoy: Percy Jackson and the Olympians: The Lightning Thief (Rick Riordan © 2005). My brief review:

First in a “middle grade” series featuring the Greek Pantheon. Percy (Perseus) Jackson is the son of Poseidon. The “Half-Blood” raised as a human discovers his heritage at age 12 and is sent on a quest to retrieve Zeus’ thunderbolt before war erupts between Zeus, Poseidon and Hades (no pressure!). Told in first person with lots of kid humor. Percy has two pals who are his protectors, Grover the satyr and Annabeth, Half-Blood daughter of Athena. I really enjoyed this book and would love to burn through the rest of the series but there are so many more to read before my 11/5/22 presentation!

Novels featuring the Olympians have an amazing amount of variety in themes and categories, everything from retellings of Greek myths by classics scholars (such as Ariadne by Jennifer Saint © 2021) to graphic novels (Lore Olympus, Volume One © 2021 Rachel Smythe). Truly something for everyone, that is, if you enjoy Greek mythology.

Who with a brain would not enjoy Greek mythology?

You’d be surprised, Lily, as my sales numbers show. . .

Speaking of marketing, one aspect of writing that I honestly do not enjoy is searching for comps. “Comps” are other books in your market niche that you hold up to agents and editors as “comparable” or “comparisons” to your work, to illustrate where you believe your books belong on bookstore shelves. Yes, really. I understand this from a business point of view, but part of me rebels at the notion- -why write a book that fits so neatly alongside what’s already been written?

The ironic thing about my current research reading for the upcoming presentation: seven years after Small-g City, the first book in my contemporary fantasy/mythology series debuted, I at last know how to describe it in the market: It’s Percy Jackson for grown-ups!

Is this an example of “lifelong learning”?

Possibly, Lily. Something else I’m learning- -lots of the new retellings of Greek mythology have a feminist twist. Ariadne is one of these, telling the story of Theseus and the Minotaur from the point of view of the princesses who made it all possible. Also, Circe by Madeline Miller © 2018 (I laughed way too hard when she turned the crew of rapacious sailors into pigs) and Margaret Atwood’s The Penelopiad © 2005. A common theme occurs in these three examples: men do terrible things but the gods inflict the punishment on the women. Yeah, I know, a bit too much like real life. . .

It’s said that people enjoy the Olympians because, in spite of being powerful and immortal, they have the same problems as us. Disobedient children, straying spouses, displays of very nasty temper. However, they can also turn someone inconvenient into an animal or incinerate someone they’re mad at with a lightning bolt.

It makes perfect sense that those of us who write about the Olympians enjoy messing with them- -showing their weaknesses and vulnerabilities and forcing them to fess up to their own bad behavior. Also, we can stick them with the same tools they’ve given us to solve our own problems.

Now that’s what I call fiction!