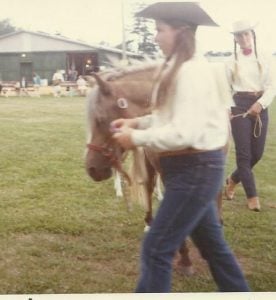 Today’s meditation is on being fat. Here’s my story:

I was a fat child. I might even have qualified as obese. At age eleven I was 5’3” and weighed 133 pounds. I wore a junior size 15. My measurements were 36”-36”-36”. From memory and photographic evidence, I had struggled with weight since childhood. The summer between first and second grade I was put on a diet. The regimen included diet pills to suppress appetite (in case you weren’t around at the time, this was not unusual for the 1960s).

I lost the weight I was supposed to lose but it came back before Christmas. This memory is cemented by a decision our teacher made when she was organizing songs for the grade school Christmas concert. One of the pieces was a choral recitation, a dialogue between Mr. and Mrs. Santa Claus. Our classroom was short on boys so she assigned a few girls, all of us fat, to beef up the Mr. Santa role. I walked out. When faced with outrageous circumstances, classroom citizenship is not my strong suit.

The years rolled forward. In fourth grade I was once chased home by a girl wielding a muddy broom. She was waiting by a mud puddle at the edge of the high school track, a wasteland we both crossed on our way home. There she stood, her stance wide, gripping the muddy broom that someone had discarded for who-knows-what reason like a baseball bat. I tried to skirt around her but she got in a clean sweep across my white knee socks and the chase began. She never overtook me, just jabbed at me with the broom until I panted and wheezed my way to the nearest main street. I turned the corner. Her footsteps faded. Pausing to catch my breath I looked back. She stood still, watching me. After several tense seconds she nodded and walked away.

We were both in Mrs. Morton’s class so there was no avoiding her. Her family lived a few blocks away from Mine. We’d always be headed in the same general direction after school. The next afternoon she was waiting for me, no broom this time, just books in her arms the same as me. She fell in alongside me. We walked side by side, silent until we got to her house. I was nervous but also curious, couldn’t help myself from asking why she’d chased me the day before.

“I wanted to see if you could run.”

It was a strange way to start a friendship but that’s what happened. We were best friends that school year, and the next year, too. She didn’t say much about my weight but other kids started giving me nicknames. Jelly Belly and Tidal Wave are the ones I remember. We were in different classrooms for sixth grade. Though we still walked home together, the friendship faded and a new friend in Mrs. Swanson’s room became my best. At the end of sixth grade, the new friend’s Dad took a job across the state. Her family moved. I was heartbroken. The scale tipped upward.

Junior high was a world twice as big as grade school. Kids from two elementary schools were combined for the first time as one class. My particular fear was P. E., and not only because I was terrible at sports. Having to undress alongside other girls, to shower as a group along the tiled, shower head-studded wall, was daunting. I was embarrassed about my flabby, rotund shape. A couple of family members talked to me about weight loss, but, in spite of my embarrassment, I wasn’t motivated to make a change.

Then it happened. My friend of muddy broom fame and I still walked home together. One day early in the school year she told me she’d made a bet with another girl in our class. They’d each placed a wager on a fat girl, betting on which one would lose the most weight. You can guess who my friend bet on.

I was crushed, but once I’d absorbed what she’d said I felt humiliated and angry. When Mom got home from work that day I told her I wanted to join Weight Watchers. She supported me completely, paid my membership fee and dues, took me to the weekly meetings, adjusted the grocery shopping to keep me stocked with non-fat dried milk (the only kind the regimen allowed), white bread (ditto), lots of fruits and vegetables and lean protein. It was my job to fill in the daily menu grids and check off the units of milk, bread, fruit and protein. Most days my school lunch was a can of tuna fish mixed with dill pickle and mustard, plus a piece of fruit. I still appreciate my locker mate for never complaining about the tuna smell.

My twelfth birthday came and went. Time passed, eight months of it. I lost 25 pounds. I felt much more comfortable in my body and could wear cuter clothes but maintaining a healthy weight didn’t solve all my problems. P. E. remained a thing accursed. I continued my unblemished record for getting picked last for team sports and being routinely drowned in water polo. Girls who had teased me about being fat now razzed me for having a flat chest. I had a growth spurt in high school and, for a while, ended up as skinny as Twiggy at her modeling apex. My weight evened out to something less skeletal by graduation. The first two years of college I packed on twenty extra pounds.

Eventually I got the weight off- -again. As a young adult I ran from non-fat dried milk and white bread, but the bones of the Weight Watchers plan remained in my head. That’s the first major take-away from my fat kid experience: having a weight loss plan that works. The second lifelong benefit is knowing that if a goal is truly important to me I’ll apply myself and achieve it. I’ve also learned to appreciate the people who help me achieve my goals, including the friend who put the pressure on by making a wager.

Did my seventh grade friend win her bet? Though we continued to walk home together the rest of the school year I never thought to ask. I never heard about it from the other two girls involved, not one word. Maybe the wager was fiction from start to finish. If so, it was a fine piece of deception. Maybe my friend got exactly what she’d aimed for.