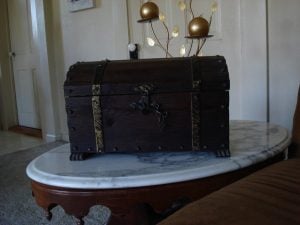 Given the week’s events (which I freely admit have left me feeling like I’ve been slapped in the face, hard), I’m compelled to examine the myth of Pandora. Her story entered my consciousness weeks ago when current events pushed me to contemplate the world and its discouraging list of evils.

The Pandora myth most of us know is ascribed to the Greek poet Hesiod, writing sometime between 750 and 650 BC. In it, an idyllic all-male world is punished by Zeus when he sends a gift of the first woman ever to Epimethius (brother of Prometheus who had angered Zeus by stealing fire from the gods and giving it to mortals). The woman’s name was Pandora. She was endowed with gifts of beauty by all the goddesses and sent to Earth in possession of a sealed jar. The jar (later mistranslated into a box) was never to be opened. Pandora’s curiosity compelled her to open the jar. Out flew all the maladies that have since plagued mankind. In a children’s version of the story, these are listed as envy, sickness, hate and disease. Startled by what she’s done, Pandora slamed the lid back on the jar, imprisoning the one good it contained: hope.

There are some very unlikely elements to this tale- -the reliance on creation rather than propagation of a large number of mortal males; the notion that Pandora was the most beautiful woman ever made (as in, “where’s the competition?”); the puzzling image of hope, the attribute that is supposed to mitigate all our woes, trapped in a jar like a firefly. Scholars, among them Robert Graves (author of “The Greek Myths” © 1955, revised 1960), view Hesiod’s telling not as a myth but an anti-feminist fable of Hesiod’s own invention. It may have something to do with social structures changing from matriarchy to patriarchy, or (my idea) maybe he simply didn’t have good luck with women. There’s also evidence that Hesiod inverted an earlier Pandora myth, in which she is not a mortal woman but a goddess of abundance.

The Relevance of the Myth

Pandora’s Box (as most people refer to it) is being invoked now, as it is from time to time when people wonder on a large scale what have we done? Doubtless the people of the United Kingdom talked about Pandora’s Box when Brexit passed. To me, it means that when the world looks unbelievably bad it’s critical not to lose hope. Maybe that’s why hope is metaphorically sealed in a jar, so it’s safe and we know where to find it when needed?

I struggle to keep hope when I contemplate what might happen to the huge number of us that the media has dubbed The Other: women, minorities, LGBTQ, people of non-Christian faiths, the mentally and physically disabled. I vow to stand up to those who assault, abuse, belittle and bully anyone who is a target for hate. That takes hope. It takes courage, too. So let’s say courage might be something left in the jar that Pandora overlooked.

I struggle to keep hope when I contemplate what might happen to our national parks and wilderness areas if fossil fuel exploration is given a green flag. Is it so impossible to say no to corporate greed? Is it so impossible to cut back on our own individual consumption of fossil fuels and the products they help create in the interest of saving the planet from carbon dioxide overload and eventual death? We need to look ahead: our country and the world are not just for us who live in the present. We need the personal discipline and farsightedness to pay it forward for future generations. I’m guessing personal discipline is getting restless, bored from underemployment somewhere in Pandora’s jar. Trot it out for a trial basis, you may be surprised what you can achieve.

I struggle to keep hope that I can extend compassion to all people, including those whose opinions I believe are flat-out wrong. This is difficult for me, especially when it appears that the individual seeks to dominate other people with their opinions. This, to me, is a form of bullying. To maintain my sanity, I need to distance myself from those who always have to be right and cannot agree to disagree, to recognize that, in these situations, all I can rally is compassion’s lesser sibling, pity.

If you take an optimistic view, Pandora’s jar has more tools in it than Hesiod described. Hope, courage, personal discipline and compassion are a pretty good beginning. On to better times, and please, please don’t lose hope.