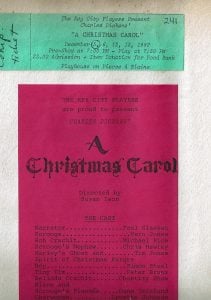 A pause to reflect on something(s) good. Ticket and partial program from “A Christmas Carol”, 1980.

The holiday season is a time when many of us pause and reflect. Soon the year will end. It’s natural to look back and assess the gains and losses of the past twelve months and prepare for the shiny, clean New Year.

Reflection sometimes encompasses the events of an entire life. Two stories come to mind, one American, one English. A Christmas Carol by Charles Dickens is the story of Ebenezer Scrooge, miser and misanthrope who, in one night, is persuaded to repent and become a friend and benefactor to all mankind. The American tale, It’s a Wonderful Life (best known as the 1946 movie directed by Frank Capra, based on short story The Greatest Gift by Philip Van Doren Stern), employs the opposite starting point. Shepherded by a guardian angel, a good man undergoing a crisis of bitter despair is shown how tragic the lives of those he loves would have been if he’d never been born.

This week I faced my own life-long reflection. It was hard not to, since we visited my home town. Surely we all face moments when we feel our lives are meaningless, that we’ve done nothing to move the world forward, inspired nobody, left no mark in the memory of others. Sometimes visits to Port Townsend leave me in a state of despair. Too many changes, too much gone, fond memories overlaid with new commercial ventures or civic “improvements” that seem more about appearances and less about heart. Like George Bailey, the protagonist of It’s a Wonderful Life, I’m left wishing I’d never been born- -or, at least, that I hadn’t been born in Port Townsend.

Each time I return there more has changed, but this time I had the presence of mind to recognize the goodness of some of the new things and allowed memory to guide me toward treasures of the past.

The new things appeared during the “errands” day of our visit. Our heaviest errand was taking three orange crates of vinyl LPs to Quimper Sound (Western Washington’s oldest independent record store https://www.facebook.com/vinylrecordstore/ ). The store was closed that day but the owner had arranged for us to leave the records with a neighboring business, The Candle Store http://www.thecandlestore.biz/ . Proprietor Ruthie greeted us with enthusiasm and incredible goodwill. She admitted to being a true vinyl fan herself and quickly guided us to the storage destination. The experience was a big, smiling WOW, and it was just the start. Virtually everyone we had contact with that day was friendly, kind and helpful, and some of these were NEW people, ones we’d never, ever met before.

The day after our errands we had the leisure to take an afternoon walk. Starting from Mom’s house, the place where I grew up, we strolled around the neighborhood. I selected a route that took us past my long-ago best friend’s house, the girl I walked home from school with from fourth grade until our lives diverged somewhere in our teens. Different people own the house now. It has a fancy paint job, but the bones are the same and I could picture the house, inside and out, as it had been back in the 1960s and 70s, right down to the cuckoo clock in the front room. The neighborhood side-streets and sidewalks were familiarly potholed and cracked, just like the old days. We ambled toward the site of the Marine Hospital, demolished in 1971 but, when I was a kid, Port Townsend’s best answer to a haunted house. You can see a picture of it in better days here:

Most of the friends I visit in Port Townsend moved there as adults. If I took a true introspective moment in acknowledgment of this fact, I’d have to admit my life would be far less rich without them. These folks have stayed in touch during our Prescott, WA decade, even though we’re 300 miles away.

The places and people I’ve described are “takes” from Port Townsend; the pending holiday season has nudged me to consider what I’ve given in return. Friendship and goodwill, of course, but what, in my 37 years of residency, did I give to the town?

In 1980 I directed the Key City Players’ first production of A Christmas Carol. It was a labor of love on a shoestring budget, my first time directing (I was 21). The script was my own adaptation, typed on an old Royal manual and taken to the theater’s regular and generous sponsor, the local paper mill, for copying. A cast of fourteen, many of them playing multiple roles, shivered through six weeks of rehearsals in the group’s first playhouse, a converted Catholic church with a cranky oil heater. Fingers crossed, we embarked on a sold-out two week run. Demand was so fierce we even sold out our mid-run pickup rehearsal. Admission was two dollars, plus a donation for the local food bank. We collected two pickup truck loads of non-perishable food.

Many Key City Players productions of A Christmas Carol followed in subsequent years. Children were always part of the cast. For some, this experience was the start of a lifelong love of theater. Many pursued acting and directing in college and beyond. Some have returned to the Port Townsend community and continue giving the gift.

In the midst of the oncoming holiday flurry, I hope you’ll take the time to reflect on the good things in your life. If that includes support for the arts, so much the better.