Performing and the People Inside

We did it! We’re back from 3 solid days of performing. That’s four of us: me, Lily, 9 and Matilda. We made it through 10 (count ‘em, 10!) hour-long performances in the course of 3 days, without the aid of a sound system.

The acoustics were amazing!

Originally the daytime shows were set at the indoor auditorium at the National Historic Oregon Trail Interpretive Center (NHOTIC). The Saturday “after hours” performance would have been at the amphitheater overlooking the valley. Check it out! 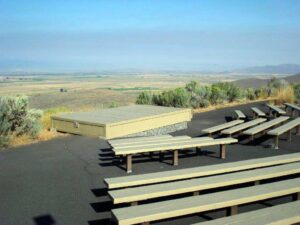 The NHOTIC outdoor amphitheater- -where we would have been performing “after hours” in non-COVID times. . .

Instead, in the interest of social distancing, we worked on the wide, deep front porch of the NHOTIC, where benches could be set six feet apart. Our “stage” was roped off on the end opposite the audience. A covered wagon was rolled into place for a backdrop, and I experienced the thrill of seeing “my name in chalk” on a sandwich board that also listed performance times. 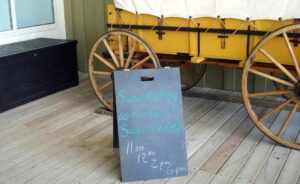 Matilda’s name is on there, too.

How come she never says anything in the blog, anyway?

After 10 performances, she’s pretty worn out, 9. Sunday afternoon she was happy to get back into the suitcase and go home. It’s not easy, working so hard when you’re 180 years old. 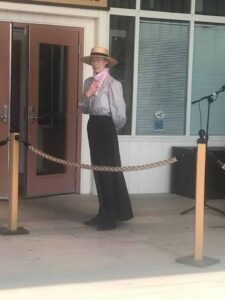 For that matter, I’m still a bit worn out from our effort!

That’s because you didn’t eat enough.

Hey, I did my best! I even ate beef two nights and chicken the third night to get those higher calorie proteins the doctor recommended.

Agreed, Lily. I’m glad to be home, back in our own kitchen and the land of fish, eggs and legumes.

Not enough dessert when we were gone.

We had a Tiger’s Milk Protein Bar!

Carob is not the same thing as chocolate, Lily, not by a mile. Besides, that was for lunch.

At least it wasn’t meat. And we got a 16-ounce latte Sunday morning.

I liked it, too. Moonlight swim, the pool to ourselves. It was like being in a novel.

In a good novel we would have had a brownie sundae when we got out.

Point taken, 9. On this trip, we had to consider Matilda, too. We had to be well-rested and not wired on sugar so she could do what she needed to do. Hers is a pretty involved story, and it took extra effort to stay focused because people had to cross between us and the audience to go into the Interpretive Center.

And then that kid barfed!

He certainly did. Hopped off the bench and vomited over the front porch railing right in the middle of the 12:30 Saturday show. Good thing I’ve been performing since I was 14 and have seen just about everything. Years ago, when I was performing with the Schwartz Sisters, a man in the audience had a heart attack. Then he argued with his friends, who wanted to call the aid car but he didn’t want them to. Stopped the show for 45 minutes.

No, not there, anyway. At some point someone in the audience called the aid car and they took him away. A few years before that, I was directing a show that opened on a stormy night. The theater lost electricity so we quickly secured a generator. One cast member was admitted to the hospital that night with a life-threatening asthma attack. I’d already arranged a substitute to go on for her, script in hand. Another cast member got stranded on a ferry across Admiralty Inlet that had stopped running because of the storm. I rotated the assistant director in to cover that role. The show did go on, in spite of an audience member suffering an explosive event with his bowels on the way to the restroom.

You said it, 9! It was a very small black box theater so everyone on stage and in the audience was aware of this misfortune. The poor box office people cleaned it up while the show rolled on. Surreal is the word that comes to mind.

For those of you who envy the performing life, it ain’t always a bed of roses. But we did have a splendid time at the NHOTIC. It’s a fabulous facility with acres  and acres of restored habitat and hiking trails, in addition to an exhibit hall that embraces reality so well that the diorama of the Oregon Trail emigrants features human figures that are dirty and exhausted looking, their horses and oxen thin and far from glossy. The rangers and maintenance staff were uniformly friendly and helpful. People got deeply involved in Matilda’s story, asked good questions, wanted to know what resource materials they could read to learn more. 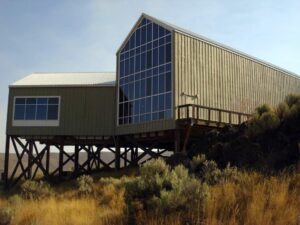 In short, I- -we- -traveled home with a really good feeling. It’s been hard sometimes to remember that I can bring something to the world, to entertain and educate, especially these past few months when opportunities to do anything cultural have been so limited. If you feel this way sometimes, hang in there. You may be performing in some amazing, needed and interesting way that you haven’t even noticed.