Persistence and the People Inside 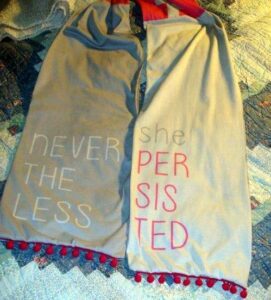 Persistence: As reminded by this scarf.

The search for Nellie Gilliam Day continues! This week I’ve queried three county courthouses, the Washington State Archives, the Log House Museum in West Seattle and a blogger who wrote about West Seattle’s Kenney Home where Nellie briefly lived. I’ve also attempted to contact Michelle Gilliam Phillips (Nellie’s great-niece, of The Mamas and the Papas fame) in case she knows any family stories about Nellie. Why this persistence for information that will not be part of my Living History presentation? Because I really want to know what happened to Nellie, the human being.

Don’t you have a scarf that says something about persistence?

I do, 9. It’s the featured photo for this week’s blog. My friend Judy gave it to me for my birthday the year Elizabeth Warren was interrupted and admonished by then Senate Majority Leader Mitch McConnell for allegedly impugning the motives and conduct of Senator Jeff Sessions in her remarks. The matter under discussion was the nomination of Jeff Sessions as US Attorney General. At the time McConnell interrupted Senator Warren, she’d moved on to reading a letter Coretta Scott King had submitted to the Senate Judiciary Committee in 1986 about. . .

Back up. What does the scarf say?

It says, Lily, NEVERTHELESS, SHE PERSISTED. Anyone who wants to read more about the incident can check this Wikipedia link:

As the scarf was deemed an appropriate gift for me, you can guess which side of the discussion I supported.

Moving right along, I’m chipping away at roadblocks that are obscuring my view of what happened to Nellie Gilliam Day the last decade or two of her life. Good thing I’m a novelist instead of a journalist, because I’ve definitely become personally involved in her life and story.

At this moment, I’m trying to use an app called clerkepass to request a document about Nellie’s guardianship c. 1931. The Walla Walla County Clerk provided me with all the information I need to make the request but the app persists in complaining that my case number is not valid. Honestly, I’m about to do a little creative stenciling on the scarf to change it to NEVERTHELESS, SHE DIDN’T PERSIST. Cue the gnashing of teeth and the shedding of frustrated tears.

But if I want more information, more answers, I must persist! If I were being fanciful about this (a very short step at this point) I would be wondering if it’s really the governmental administrative systems that are blocking my attempts, or if it’s the ghost of Nellie, herself, trying to keep me out.

If that’s the case, it could be the beginning of a killer short story.

Thanks, Lily, I’ll add that to my ideas list. Meanwhile, the search goes on. Who knows what my persistence will yield by the time I’ve finished?

This just in: I’ve had a reprieve! Given my struggle, the folks in the clerk’s office have offered to print the document I need in their office. Now all I have to  do pay for it and pick it up, no go-between  app required.

Persistence, coupled with admitting there are some things I just can’t figure out how to do. A winning combination.