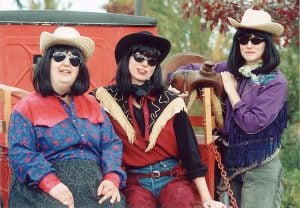 Grown Ups Play Dress Up: The Schwartz Sisters in the early days. Photo by Sandra Dodson.

Sometime in your life you’ve probably played “dress up,” donning a costume of make-believe, whether it was something a grown up would wear (like Mom’s spiked heels) or something self-made, like a construction paper crown. I’ve certainly played my share of dress up, both in theatrical productions and as a western entertainer. The place where those two art forms intersect is where I had the most fun.

I’m talking about (drum roll, please) the Schwartz Sisters! The trio hatched in the year 2000, a three-person “sister” act that identified as cowgirl but performed pop songs of all genres, interwoven with a nifty comedic plot. We were named after the girls in the “I Got Spurs” song made popular by Gene Autrey: Eldest sister Bessie Lou (the mean one), middle sister Sallie Jane (the smart one) and little sister Lillie Belle (the stupid one- -that’s me, that’s me!). In keeping with the song, we added an illegitimate half-sister, Maryanne Fitz-Schwartz, for our Halloween program titled “The Dead Boyfriend Show.” The script featured 1950s vintage “dead girlfriend” songs bent for gender and an original dramatic pageant, The Death of Hank Williams (rated PG+). We were our own backing band, attacked almost every song with 3-part harmony and threw some soft-shoe routines into the mix, just to keep things interesting.

Maryanne Fitz-Schwartz was far from our only relative. We, of course, had a Mama. She never agreed to appear in person, but she did demonically possess Lillie Belle during one performance. Our beliefs about Daddy (who was, of course, Mama’s first cousin) were mixed; somehow, there seemed to be three of him. There was Great Grand Ma-Ma Marlena D. Schwartz (long departed but remembered through her favorite song, “Falling in Love Again,” delivered in heavy German accents). For the “Family Reunion Show” we got together with all kinds of cousins: Frita Mae (thanks for the Jell-O dish with marshmallows), troubadour Leonardo de Longhorn, Crazy Patsy Catherine and Frank McSchwartz and The Reverend Little Davey Schwartz (all grown up but still preaching after his early start as a child evangelist). Cousin Little Kate Bessie Schwartz, kidnapped by banditos as an infant and raised by a South American order of nuns, The Sisters who Run With Wolves, kicked her habit and showed us (with the aid of a masked mystery man) it takes two to tango. And she wasn’t our only dancing guest: Miss Mamie, Lillie Belle’s childhood dance teacher, dropped in for a stunning soft-shoe duet! Mr. Nevada Slim kept the comings and goings sorted out as our MC for Life.

You may ask yourself, how do you make three 40+ women who are radically different in appearance look like sisters? Answer: cowgirl outfits in harmonious colors, plus matching Cleopatra wigs, plus sunglasses, plus bright red lipstick (Revlon #752 was the family favorite). And speaking of age, once you don your Schwartz drag, a miracle happens: your age is instantly cut in half. I’ll admit, the year I spent at 20 ½ was awkward, but you get used to it after a while.

The Schwartz Sisters performed from 2000 to 2007. Why did we stop? It was a case of geography. In 2007 one of us moved 300 miles away from the other two (it was something they said- -kidding!). Our most ambitious year was 2003. In addition to local shows (Port Townsend, WA) we performed at the Northwest Folklife Festival in Seattle, the Yakima Folklife Festival and a much-vaunted but weirdly hung-over and lightly attended private music festival somewhere in the Port Angeles, WA, wilderness (the audience lived in tents and our dressing room was a woodshed). We made a CD (Cowgals Who Dare). We were chosen as royalty, a 3-person Second Princess, for the Kinetic Skulpture Race and performed at the Wooden Boat Festival. One holiday season we picked a week to perform at every open mic in Port Townsend (believe me, there are many). The hula-inspired interpretive dance to “Blue Christmas” was a sight to behold.

The Schwartz Sisters do have a family reunion from time to time, mostly at the Mezzaluna Lounge in Port Townsend. They don’t have a piano at the Mezzaluna, but if they did we’d probably sing a few for old times’ sake. Sometimes we do any way, singing acapella (“Acapulco” in Schwartz-speak). It’s been years since we’ve done the act, but the Schwartz Sisters pop to the surface the instant we see each other. They stick to us like shadows the entire evening.

If you’re dressing up for Halloween, I hope you have lots of fun, also that your costume doesn’t itch. Maybe I’ll throw on my wig, dark glasses and red lipstick and join you. If you hear someone singing “Falling in Love Again” in a bad German accent, it’s probably me.