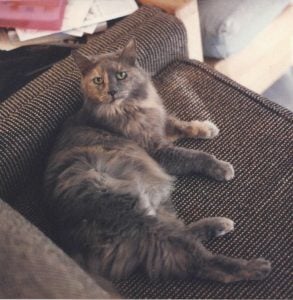 Moo, who started it all

It’s always been this way. I don’t know why. Perhaps it was an early act of rebellion. Dad was severely allergic to cats. We couldn’t have one when I was growing up. When I was three or four years old Dad said or did something that made me angry. I don’t remember what it was, but I do remember telling him I hoped a big cat would come sit on his head. He laughed really hard. He appreciated my originality if not my venom.

There were family dogs, of course, and everything “cat” that wasn’t a real cat. Stuffed animal cats, cat pajama bags, cat figurines. One year for Halloween I told Mom I wanted to be a Kitty Princess. She capably faked her way through this request, drawing whiskers on my face with an eyebrow pencil and whipping up a cape.

At age 20, when I was married and had my own house, the first real cat came into my life. My sister was home from college for the summer, staying with Mom and Dad. She’d adopted a gray and peach tortoiseshell kitten and had tried to keep it with her, confined to her bedroom. Nevertheless, Dad’s allergies reared up to an asthmatic level and the kitten had to go. I agreed to take her for the summer and, of course, was too attached to give her back when autumn arrived. She was renamed from Amber to Messalina (the “I, Claudius” series was popular then).

Was there ever a pet that didn’t have one or more nicknames? Messalina was sometimes called Messy but Moo was the name that stuck. She was with me seventeen years, through divorce, finishing college, remarriage and several moves throughout. The thing about Moo was, she was definitely my cat. A better way to put it: I was her person. She was sweet to me and grumpy to everyone else and bit unwanted hands that tried to pet her. At fifteen, she developed a thyroid condition that required wrestling pills down her throat twice a day. She hung on for two more years. When she died I was devastated.

Devastated or not, our house was in the woods and, after a couple of months, mice were regular visitors. Heartbroken over Moo, we adopted a tortoiseshell named Chili from the animal shelter. She was rechristened Arial. After the traditional cat practice of hiding behind and under things the first two weeks, she took up a post by the pipes under the bathroom sink and started her career in security. She was a lovely cat but I mourned Moo for a long time. It took a second divorce to make me bond with Arial, two years wasted that could have been spent in feline friendship. I will never make that mistake with a cat again.

Moo, in her early years, had an orange tabby consort names Ouzo (he was ultimately adopted by another family). Her successor, Arial, had an apprentice. She took him on when he was a kitten. Zorro was a feral cat with short black fur. I first noticed him following her around the yard, several paces behind, copying her movements. This came to be known as Baby Elephant Lessons. The lessons continued his entire life, which was sadly short due to an immunity disorder common to feral cats. In his brief three years he became a house cat (after he’d served the mandatory two weeks hiding behind the washer and dryer).

Arial suffered the indignity of moving 300 miles across Washington State in 2007. We were concerned about how she’d adjust, though our vet had assured us kitties love Eastern Washington. Her reaction to the move inspired my short story Henry (THEMA Literary Journal, Summer 2008 Issue). She toured with us that summer, captive in the converted MCI 5 as we wound through Washington and Oregon for seven weeks of musical performance at county fairs. Mid-tour, she stopped eating. We found a vet near the Kittitas County Fairgrounds in Ellensburg, WA. The tests indicated renal failure. He fixed her up with antibiotics and kidney diet wet food. We held our breath, finished the tour, and made an appointment with our new vet back home.

We were lucky. The vet initiated subcutaneous hydration and Arial responded. In a couple of months she was back to normal. For three years we hydrated her every three of four days, which involved a saline IV drip, tubing, a hollow needle and a really good hold on the cat. The end was terrible and sad when it came. But this time, we didn’t have to go through the heartbreak of adopting another cat. There were two more in the household.

It’s a sad discovery we’ve made, living in a rural area. People tend to dump unwanted animals in the wheat fields and leave them to fend for themselves. That’s how we met Grizelda, a dainty tabby tiger who, we learned years later, had been micro chipped by a previous owner. Next was Friday, a handsome and affectionate tuxedo cat found starving in a ditch across the road. Piebald, another Tuxedo, showed up three years later and is Friday’s bosom pal, though he won’t let us touch him. Hoosegow was abandoned by renters across the street. He’s an amazing guy, part Maine Coon and extremely smart.

That’s our four-cat household, not planned by us but by fate. This week we have a stranger hiding under the covered porch, a half-grown individual with long fur but markings like a Siamese, possibly a Himalayan or a Ragdoll. Like the orange kitten we found under the lilacs in 2013, we’ll be asking neighbors if they’re missing this person. Ultimately, he or she will go to a rescue shelter or another home because the four cats we have now and can’t bear to part with are really too many. Our beagle-dachshund mix, Doc Holliday, has his paws full herding them, too.

You’d think since I’m surrounded by cats they’d show up more in my fiction. There’s Henry, as mentioned above. Orange, imperious, flat-faced Bill Gates, Jr., is featured in Big-G City https://www.susandmatley.com/big-g-city/. In the 1990s, when I was still writing romance novels (none of them published) a talking cat was one of the main characters in a book titled The Binding Charm. Every cat in my fiction is large, orange and male. Aside from Moo’s pal, Ouzo, who exited my life in 1983, I’ve never had such a person in the family. Am I changing coat color and, sometimes, gender to “protect the innocent” in my life? If the cats ever tell stories about me, I hope they’ll extend the same courtesy.