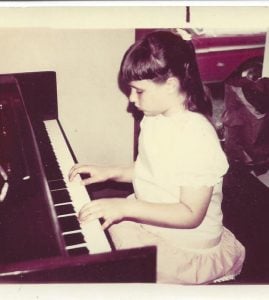 One last time through “Alpine Yodel” before the recital, 1968.

Every May I think of piano lessons, or, more specifically, piano recitals. Since my kids are all of the 4-legged variety, I haven’t attended many of these as a spectator. My experience comes from being part of the show.

Seven years of piano lessons and seven recitals. My first year of instruction was with Mrs. Fanning, the first recital set in the Fort Worden chapel in Port Townsend, WA. I was well-prepared to perform “Alpine Yodel” written by- -well, I don’t recall. But it had two key changes, which was a big deal. My costume was a pink and white dress with tiny polka dots, hair pulled back in a pink bow. Aunt Boots brought me a corsage of white carnations with pink ribbon trim. The corsage made me feel very grown up.

The next year I started lessons with Mrs. Marriott. She’d been teaching music for so long she’d been my parents’ orchestra teacher when they were in grade school. I loved Mrs. Marriott, but I nearly finished her off. Somewhere in my 6 years of lessons I developed the bad habit of procrastination. It was like pulling teeth to get me to practice, and a last-minute decision as to whether I’d be ready to play in the recital. By last-minute I mean two weeks. This is how long it took to get the recital program printed, a specialty task performed by the local newspaper. Probably the best thing about the 1970s was that few things were “instant,” aside from mashed potatoes.

My mother, I must say, had the patience of a saint. A formidable and angry saint. One year in particular she and I stayed home while Ann and Dad went on a Memorial Day cruise so Mom could oversee my practicing. The piece: Sonata in C by Mozart. Somehow we struggled through, though I remember kicking the poor old spinet piano more than once.

Early in my career with Mrs. Marriott, I was paired with another student to play duets of Blue Tail Fly and Minuet in G. I will not name my duet partner, as performing in a piano recital with me probably launched her into years of therapy. It happened like this. Minuet in G came off without a hitch but somewhere in the course of Blue Tail Fly we both stopped playing, glared at each other during a pregnant pause and then picked up simultaneously at the exact same place. Which one of us had screwed up was never clear. It was probably me, though, because from that day forward I was strictly a solo artist.

In the long run, piano lessons were a real gift. I learned how to read music, a big advantage for later cello and voice lessons. In my twenties, I easily picked up bass guitar; in my forties, I taught myself accordion. But there’s a larger life lesson in all of this. It has to do with my parents and their expectations of my sister and me. Whatever extra-curricular project we started, they made us finish. If I agreed to take piano lessons in the fall, I was duty-bound to perform in the recital at the end of the school year. I learned that tantrums wouldn’t cut it; only hard work would see me through. These days, Mom marvels at my self-discipline, particularly in my daily work as a writer.

That ability didn’t drop out of the blue.