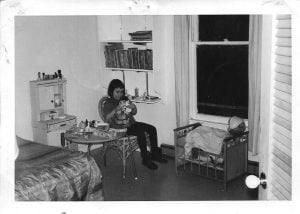 Today, when it was blog writing time, I couldn’t picture what I was going to write about. Not writer’s block, exactly- -just that blah-blah battling my springtime allergies and being entirely unmotivated kind of feeling.

If you’re like me you have stacks of boxes somewhere in your house that are stuffed with old pictures. Well, if you’re old, anyway. If you’re young, you probably have your favorite photos stored on your smart phone. And, if you’re young, most of your photos are probably color.

No such problems here! Instead of remaining in the blah-blah allergy-ridden present, I’m going back in time to approximately 1965 and- -my old room.

Those of you who remember 1965 will recall everything was black and white back then. Also, the kitchen appliances were made out of cardboard. A bob with bangs was the latest in hair styles, called a Beatle Cut by the beautician at Fred’s Uptown Beauty Salon. Windows were single pane. Books were large, thin and illustrated.

Okay, none of that’s true (except for the Beatle Cut). My room was quite colorful. The wooden floor was painted with bright orange enamel, the bedspread orange, gold and brown stripes. One wall was painted yellow, for contrast. The cardboard kitchen unit was pale pink.

Dig the cool threads, pretty much what I wear now when I’m working at home. Short black boots with a fur cuff means it was probably winter (or, in Port Townsend, WA, June). The chair I’m sitting in is rattan and looks relatively harmless, but don’t be deceived: Maleficent, the evil fairy godmother from Sleeping Beauty, was always waiting there when I woke up in the middle of the night! I’m holding two toy cats, one in a fancy blue gown, the other made of molded rubber with a squeaker inside. The stuffed two-tone bear in the doll crib is something grandpa won at the carnival. There’s a doll under the blanket. Look closely and you can see her hand. I could read some of the books in the shelf but many were still read to me.

What’s the point of old pictures, aside from providing a nostalgia break when one is needed? Pictures document a point in time. If you’re in the picture, likely you can remember an event, feeling or time when the world was “like that.” When you were so small your feet dangled when you sat in a full-sized chair. When bangs grew sticky on your forehead. When the window let in a mild draft that the baseboard heater couldn’t quite combat. Sense memory and the bones of a specific setting at your command. Pictures are a writer’s friend.

I can even remember a time without allergies.