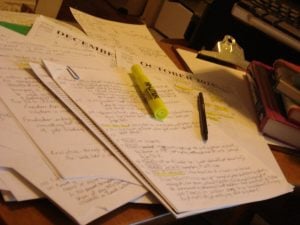 The desk of a Plantster

If you’ve been following this blog from the early days, you know I’m a self-confessed procrastinator when it comes to reading professional publications. You’ll be happy to know I’m getting better at keeping up with current issues of Poets & Writers, Roundup (Western Writers of America) and Writer’s Digest. IN FACT, I have already read the Writer’s Digest May/June issue from cover to cover!

I’m pretty sure you just fell out of your chair in disbelief, so pick yourself up and keep reading.

Within the covers of the magazine noted, I discovered something new. It concerns “pantsing.” Yes, I, too thought the definition of this word was “a type of physical assault performed by junior high school bullies on unsuspecting smaller kids with loose-fitting pants.”  My ancient Merriam-Webster Dictionary (“The only one with 1970 population figures for U. S. cities of 12,000 or more”) does not list pantsing among its definitions, but if it did I now know the word has at least two meanings.

Pantsing, as it happens, is also a word that describes how writers produce novels. The opposite of pantsing is plotting. A pantser flies by the seat of their pants when writing a first draft, making it up as they go. A plotter maps out the story blow-by-blow. Each method has strengths and weaknesses. Jeff Somers’s article, “Plantsing: the Art of Plotting and Pantsing,” recommends a hybrid approach that uses the best features of both. Stuck in a plot that was breathtaking in outline but falls flat in 80,000 words? Go back to where things got dull and pants a way out. Is your stream-of-consciousness novel, written in less than a month, illogical and riddled with paths not taken? Look it over and take some notes; with luck, a plot will emerge.

Like most novelists, I use both methods. Depending on the story, one method will dominate. When I’m writing historical fiction I start with a chapter-by-chapter outline of the plot, in sync with the history that frames the story. Invariably the characters want to do something different than what I’ve planned. I try to be a good listener and let them pants me around with their suggestions but ultimately I am the boss. With fantasy, I usually know the beginning, the ending, the main character and what they want to achieve. I pants wildly around in the middle part, meeting all kinds of people and discovering sub-plots I never dreamed of. I sprint, breathless, to the end of the first draft, then go back to the beginning to pick up the pieces. I use a spreadsheet program to chart the story by scene, with columns for date, location, point-of-view character, one-word plot description and scene synopsis. I print it out, tape it together and study what I’ve got. The best plot lines are identified and the weak ones are thrown out. I adjust what’s left to create a story arc that builds and peaks at the right time, including the story arcs of individual characters. As a bonus, an overall theme might emerge that will help me build a concise sales pitch for editors and agents.

Writing a novel sounds like a lot of work, and it is. Fortunately, I experience great satisfaction as a rough manuscript is distilled into the story it was meant to be. Given the lively interplay between plotting and pantsing, it’s not always the story I started with. And that can be a good thing.