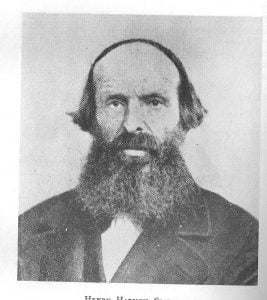 Henry Harmon Spalding, the flip side of Marcus Whitman

If you grew up in Washington State and were educated in the public school system (long may it reign!), you’ve probably heard about Henry Harmon Spalding via the eighth grade requirement, Washington State History. Little known fact: 155 years ago, he lived across the road from our place.

Reverend HH Spalding is generally overshadowed by the story of his associate, Dr. Marcus Whitman. Both men were early missionaries in Oregon Country, comprised of the present day states of Washington, Oregon, Idaho and western Montana. They arrived in 1836, along with their wives who were the first “American” (meaning white) women to cross the Continental Divide. Whitman established his mission, Waiilatpu, approximately 7 miles west of the future city of Walla Walla. Spalding formed Lapwai Mission on the Clearwater River near today’s Lewiston, Idaho.

Why was Spalding there in the first place?

Members of the Nez Perce tribe who lived and hunted in the Lapwai vicinity had sent a delegation back east in 1831 to meet with explorer William Clark. Their mission: to obtain the “Book of Heaven,” known to us as the Bible. The Nez Perce had become acquainted with the Christian religion twenty-five years earlier, through their contact with the Lewis and Clark Expedition. A report of the Nez Perce delegation to Clark found its way into the Christian Advocate. Christian missionary societies were quick to grasp (what they perceived as) the desire for religious instruction in the tribes out west. In 1834, The Methodist’s Mission Society sent Jason Lee to Oregon Country. Whitman and Spalding came next.

In terms of converting the local natives to Christianity, Spalding drew the lucky straw. The already receptive Nez Perce were his flock; the Whitmans established their mission among the less enthusiastic Cayuse. Tensions grew as Marcus Whitman’s advocacy of white settlement out west brought hundreds, then thousands of covered wagons across the Oregon Trail. The situation reached a breaking point in November 1847, when emigrants wintering at Waiilatpu brought with them the measles. Many Cayuse (who lacked immunity to the disease) and a few whites died. On November 29, several Cayuse braves attacked the settlers, killing Whitman, his wife Narcissa, their adopted sons John and Frances Sager, and several adult men. Fifty-four others were held hostage (including Spalding’s 10-year-old daughter, Eliza, who was attending the mission school). The captives were successfully ransomed by Peter Odgen of the Hudson’s Bay Company one month later.

Spalding was 30 miles south of Waiilatpu at the time of the massacre. He and Whitman had been visiting the Umatilla tribe, Whitman to treat cases of measles and Spalding to preach. Whitman left the Umatilla before Spalding; the massacre at Waiilatpu happened shortly after Whitman arrived home. When Spalding headed in that direction a couple of days later, he was met by Catholic missionary JBA Brouillet who had gone to Waiilatpu the day after the massacre for a previously arranged meeting with Whitman. Brouillet, a Jesuit priest, had just finished burying the dead. The priest intercepted Spalding before he, Spalding, arrived at Waiilatpu, told him about the massacre and informed him that the Cayuse planned to kill him upon his arrival. With little choice, Spalding fled to Lapwai, 100 miles distant over icy ground. He lost his horse en route and completed most of the trek on foot, arriving frozen and anxious for the safety of his wife and three younger children. Though the family was unharmed, their home had been vandalized by a small group of Nez Perce who sympathized with the Cayuse. The Spaldings were soon evacuated from Lapwai, with a loyal Nez Perce escort.

It was an ugly time in Pacific Northwest history. The United States and England had only recently resolved the US/Canadian boundary dispute, with the creation of Oregon Territory in 1846. Americans were resentful of the Hudson’s Bay Company’s continued presence in Oregon Territory. White settlers were arriving in ever-increasing numbers, encouraged by the United States government to settle the land and protect it from possible British incursion. Tensions over land ownership escalated the aggression between settlers and the native populations.

Spalding loudly persisted in his anti-Catholic opinions for the rest of his life. It cost him a great deal in support and credibility. Why did he worry this particular bone? He’d always been negatively disposed toward the Catholics for religious reasons. Also, most of the Jesuits assigned to Oregon Territory were Canadian and, as a result, associated with the British and the Hudson’s Bay Company. I believe Spalding’s existing opinions, coupled with the trauma of his narrow escape from Waiilatpu and forced evacuation from Lapwai, resulted in partial loss of his reasoning capabilities.

After the evacuation, Henry Harmon Spalding lived in Brownsville, Oregon, until 1859. That year, he moved back to the Touchet River area, approximately 20 miles from the Whitmans’ Waiilatpu Mission. The area had recently opened to white settlement. Spalding claimed a homestead and raised sheep and cattle for the next three years. That homestead, near present-day Prescott, WA, is directly across the road from our house. Though the original buildings are gone and the property has passed through many owners, I think of Henry Spalding, of his heartache, trials and unrelenting bitterness, when I look in that direction. The homestead was his jumping off point for a return to Lapwai Mission, then in the hands of the US Bureau of Indian Affairs. Government officials who did not trust Spalding’s judgment and ability to teach and preach at Lapwai eventually rotated out of public office. In 1862, Spalding returned to the mission he’d founded. In a few short years, the political wheel turned again and sent him back to Brownsville.

Why am I so interested in Henry Harmon Spalding, other than looking up an old neighbor? He’s the main character in my novella-in-progress that begins in 1866, shortly after his second expulsion from Lapwai. Spalding is a difficult figure for me to sympathize with. Writing about him, writing as him, is forcing me to understand the man, his hopes and his demons. As a consequence, I’m examining my own hopes and demons.

There is more to Spalding’s story. Biographer Clifford Drury’s “Henry Harmon Spalding” (© 1936, Caxton Printers, Ltd., Caldwell, ID) is an excellent, readable and comprehensive telling of this dynamic western life. If you, too, are at odds with an historic figure, I hope you’ll consider getting to know them better through biography. Maybe you’ll never agree with them, but you might, just a little bit, come to understand. Even about yourself.