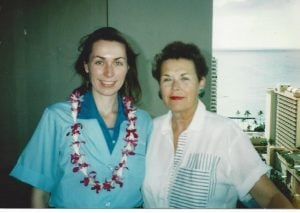 With Mom, before so much Red Tape

As a former auditor, I’m very much in favor of people following rules and regulations, but this week I encountered an incident of red tape that was too much, even for me.

It should have been simple. All I wanted to do was change the billing address on one of my Mom’s utility accounts. Piece of cake, right? Wrong. Naturally I understood the customer service representative’s request to speak to the account owner before any changes were made. I told the rep I’d have her talk to Mom.

“What about Glenn?” the rep said before I could hand over the phone.

Imagine my surprise. Glenn is my dad, who died in 1994. This particular utility account was in his name and for some reason hadn’t been changed over to Mom’s name at the time of his death. I explained the situation.

“Is she the owner of the service property?” the rep asked.

“Well, if I knew her, personally, I might be able to make an exception.”

“She’s lived in Port Townsend since 1928,” I said in an effort to suggest it was hardly Mom’s fault this person hadn’t had time to make her acquaintance.

Due to recently tightened confidentiality rules, the rep said Mom would have to apply for a new account and send the completed application back with a copy of Dad’s death certificate. I also learned that the utility commissioners were the ones who’d made the new rules; I asked for names.

After Mom and I finished laughing at the absurdity of the situation, I called the utility commissioner who represents Port Townsend. He quickly got back to me and said he’d see what he could do about this unintended consequence of the new rules. To his credit, he not only wanted to help with Mom’s issue but said the rules might need some reconsideration as Mom’s was surely not the only such case.

I’m confident this story will have a happy ending. Besides, it’s given me an idea for another drawing. To enter the drawing, send in your guess at the name (or type) of the utility described above (via Facebook or the contact page at my website https://susandmatley.com ). All entries, correct or not, will be placed in the drawing. Anyone can enter (including friends, relatives and neighbors). Entries accepted through September 30, 2016. The winning entry will be selected by one of our cats (we have four). The prize is an autographed copy of my new book, Big-G City.