Remembering Friday with the People Inside 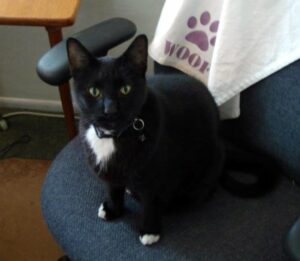 I am sad to report that my friend and housemate of 14 years, Friday June the Sixth, has died.

He was the world’s sweetest cat.

And the world’s best snuggler.

100% true, Lily and 9, and I’m sure anyone who met him would agree. But his life was far from snuggly when we first met.

We lived in Prescott, WA, back then, at the T-intersection where Hart Road and Highway 124 meet. Across the street was a run-down house with an even more run-down barn. In that barn lived a colony of feral cats.

Some of them were feral, anyway. But all too often people from I-don’t-know-where would dump unwanted animals at that particular intersection. People who do this, in my opinion, should be horsewhipped. The only thing I can figure is, they benightedly believe domesticated animals can learn to survive on their own before they starve to death trying to figure it out. Either that, or they don’t care if their discarded pets become a coyote’s dinner.

Friday nearly experienced both fates. We’d seen him staring out from the tall grass on the side of Hart Road, but if we got close he’d vanish. Until Friday, June the Sixth, 2008.

So that’s where he got his name!

Yes, 9, it was the day of his literal rescue. Bruce spotted him lying in the ditch on the other side of Hart. The poor kitty was so weak with hunger he couldn’t stand. When Bruce picked him up, he immediately started purring.

We set up a place for him in the shop- -blanket, food, water, litter box- -and looked on in amazement as he pulled himself forward on his front legs and dove face-first in the kibble. He ate with such intensity that kibble flew from the dish! He was a young adult cat at that time, and very long, forty-four inches from nose to the tip of his tail. One of us stood on a scale to weigh him- -five pounds. 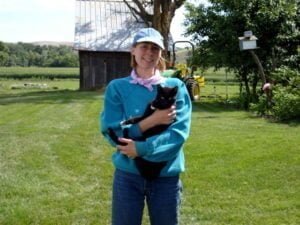 Friday at our place in Prescott. A skinny boy, newly rescued, June 2008. Photo by Bruce Matley.

For a week he ate and rested and grew stronger. Curiosity about what was going on in the shop mounted for the dog and our two other kitties. He regained enough strength to walk but never developed the musculature to jump. That first week I held Friday while Bruce snapped a picture. We commemorated Friday’s anniversary this way for many years to come.

We took him to the vet when he was stronger, for a general looking over, vaccines and a blood test (which fortunately came out negative on all the diseases they tested for). He was such a friendly guy that when the vet was shaving his neck to prepare for the blood draw, he purred. This particular vet was not a cat person, but after meeting Friday he said, “I think he’ll be a pretty good cat for you guys.”

It didn’t phase Friday that the two other kitties, both female, uniformly hated him. He ambled amiably through the house and the fenced part of the yard, made friends with the dog, and eventually adopted a true feral from the barn across Hart Road, someone we named Piebald when he became part of the family in 2011. The two of them had tuxedo coats, mostly black with white accents. They hung out with each other constantly, and sometimes we observed them striking exactly the same pose, chests proud and heads up, which earned them the nickname Lewis and Clark. 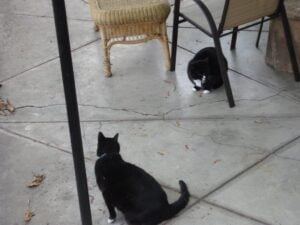 The other animals were wary when guests came to our house, but not Friday. He’d walk right up and introduce himself and, if the stranger took a seat, would soon hoist himself up to their lap. He was a big cat, seventeen pounds in his prime. Friday was a particular favorite of his Grandma Marge, and joined her in the recliner when she visited. His sitter, Phyllis, also developed a strong attachment to him. When I called to tell Phyllis he’d died, she cried, and when I saw her at the grocery store this week she told me she’d cried all that day. 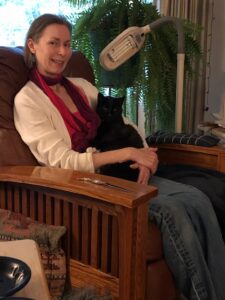 In 2018 we moved from Prescott to Walla Walla, with the whole menagerie including Friday’s friend Piebald who had to be trapped as he still wouldn’t let us touch him after seven years. We were a household of seven: Bruce, me, dog Doc Holliday and cats Grizelda, Friday, Piebald and Hoosegow. The first four were approximately the same age, Hoosegow several years younger. Bruce died suddenly, eight months after we moved. I’ve also had to say goodbye to everyone but Hoosegow: four pets in two and a half years. It was particularly hard for Friday to lose Piebald in April, 2021. I often observed him sitting in spots they used to share, looking into the distance.

Friday had a remarkable internal clock. When he became Senior Cat after Grizelda died (2/29/2020), he reliably woke me up every morning at 4 AM by sticking a paw in my face. Not even the switch between Daylight Savings Time and Standard Time altered his schedule.

His medical issues started last November, GI problems that were eventually narrowed down to either IBS/pancreatitis or intestinal lymphoma. Monthly injections of Vitamin B-12 and steroid, plus increasingly frequent administration of subcutaneous fluids and appetite stimulant, kept him going until they didn’t. He had a good run, made it to fifteen by my reckoning, six days past the fourteenth anniversary of his rescue.

He was a really brave kitty.

I think so, too, Lily. His last few days he slept a lot, mostly in the knee hole of Bruce’s old desk, but he also enjoyed being outside when the sun was out. I continued giving him subcutaneous hydration but he hadn’t eaten much for a couple of weeks. Mostly it was a matter of keeping him supplied with clean blankets and checking in on him regularly. Every time I took a moment to pet him, he purred. In the evenings we watched the first season of Good Omens, and the movies Late Night and Young Frankenstein, me curled up nearby on my own blanket. He died at home last Sunday, shortly after 10 AM. 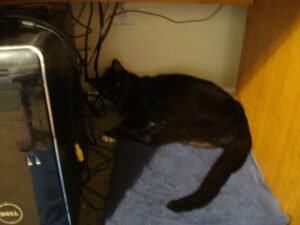 Friday was a big, warm presence in my life and I miss him terribly. But, as with the passing of all my beloved pets, I am mindful of loving the one or ones who remain. Hoosegow is adjusting quickly, beginning to understand the responsibilities of being Only Cat, a position he’s aspired to since he entered our lives in 2013. Unlike chummy and gregarious Friday, Hoosegow is a more traditional cat, aloof and questioning. This week he’s mellowed. When he seems uncertain I say, “Yep, buddy, it’s just you and me now.”

And you and Lily, 9. Together, we’re going to be okay.