Remembering Kathy with the People Inside 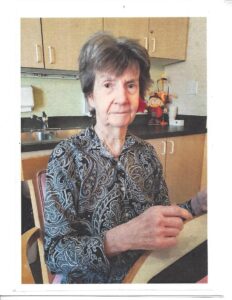 Last week brought a landmark loss. My dear friend and writing mentor, Kathleen “Kathy” Beck, died at the age of 89.

Thank you, Lily, thank you 9. Kathy lived with Alzheimer’s disease for nine years. For a long time she was able to stay in her home, eventually with 24-hour care. Her last five years were spent at San Juan Villa Memory Care in Port Townsend. I sent her cards and letters and visited her there, most recently this June. At that time she was completely non-verbal, during our visit, at least. Beyond the externals I couldn’t see anything of my incredibly talented and razor-smart friend.

It is indeed, Lily. You and 9 would have liked her very much.

Kathy, her husband Bernie, and their son, named after his father but known as Buzz, arrived in Port Townsend in 1975. At least that’s when I noticed Buzz, who was very cute, at Port Townsend High School. Buzz was also charming and funny and interested in theatre. We were both in the school production of M*A*S*H that year (he played Colonel Henry Blake and I was Major Margaret “Hot Lips” Houlihan).

I was aware that the Beck family lived in the A-Frame next to my Grandma Gretchen’s place. Colonel Beck was retired military and had served all over the world, working in intelligence. I knew who Mrs. Beck was, given both the cuteness of her son and the size of the town (less than 6,000 people back then), but I didn’t really get to know Kathy until the late 1990s. By that time her husband, Bernie, had died. Their son, Buzz, was badly injured in an auto accident when he was in his 20s and has lived in a nursing facility ever since.

That must have been hard for her.

It was, Lily. At one point she told me part of the reason she liked seeing me was because Buzz and I had been friends. But Kathy was one strong lady and had the determination to keep going. It was in the late 1990s that she and her friend, Audrey, having heard I was a writer, invited me to join their critique group.

Good question, 9. In this context it’s a group of writers who get together on a regular basis and share their works-in-progress, both giving and receiving ideas on what’s good about their writing and what might make it better.

That sounds like getting constructive criticism from a director in a play.

Very much like that, except in a play actors are usually compelled to do what the director says instead of weighing the criticism and deciding themselves whether or not to use it.

The critique group was comprised of three women and three men. We met every week or two with our brown-bag lunches and brought six copies of whatever chapter, scene or short story we’d written since the last time. Criticisms were exchanged and sometimes debated. The differences between female and male sensibilities were sometimes stark, especially when it came to one member’s extremely hard-boiled detective fiction.

Without exception, Kathy’s critiques were the most useful to me. She had a keen sense of structure and plot, and, as a published author in Kensington’s Zebra imprint, understood the inner workings of the romance genre. 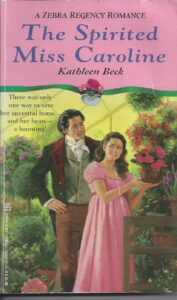 One of Kathy’s Regency Romances: The Spirited Miss Caroline (c) 1998. Dedicated to her son, Buzz.

But that’s not what you write, romances, I mean?

Not anymore, 9. There was a bit of misdirection during my early writing days, when I was sending out all kinds of pieces to all kinds of publications. My first sale was to True Love magazine, a true-ish story titled “I Saw Him Kissing another Man’s Wife”!

Not very, but it was marketable. As it turns out, confession magazines fall more or less in the romance genre. I took it as a sign to follow up on that first success. Four unsold romance manuscripts later. . .Well, let’s just say the critique group helped me identify my present home in  paranormal fiction. Kathy, though not a paranormal fiction fan, definitely encouraged me in this direction.

The critique group eventually disbanded but Kathy and I stayed in touch. I visited her at her home on trips to Port Townsend, where she plied me with lemon-ginger tea and madeleines, and told me about her life. She didn’t say much about her childhood. Once, when I tried to engage her in a conversation about A Tree Grows in Brooklyn, she said she couldn’t stand the book, it was “too close to home.”

But I did hear about her years abroad while Bernie was in the army, and learned about her accomplishments. She was adept at many things outside of writing. Anything to do with fabric (including the restoration of antique apparel), and landscape painting come particularly to mind. She was incredibly funny- -sweet and demure on the outside but quick to deploy a sly, sometimes wicked wit. I told her she made me think of a hip reverend mother with a colorful past, which she found hilarious.

And cats. Always cats. Some beautiful, some homely, all of them spoiled rotten with love.

In 2007, right before Bruce and I move to Eastern Washington, Kathy was downsizing and insisted- -insisted!- -I accept her gift of the teak carvery table she and Bernie purchased when they lived in Thailand.

“You need this,” she said when I, thinking of all the stuff we’d be packing into the moving van, tried to turn her down.

Yes, I took the carvery table. It’s been my writing desk ever since. The first piece I wrote at it sold to a literary journal, my first sale since my beginner’s luck with True Love magazine. 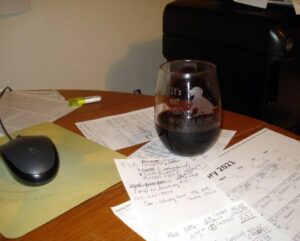 The carvery table, aka my writing desk. Raising a glass to Kathy!

Any friend of Kathy’s (we are many) will tell you there was something magical about her. She and I shared an Irish heritage and sometimes the twinkle in her eye made me think of a leprechaun. She was my constant advocate, chose me to read a chapter from one of her books at a public short story event, and continued to critique my new work.

In 2011 she was a Beta reader for Small-g City (you can see her name in the acknowledgements). Instead of a printed copy she’d requested a Word file, so she could enlarge it on her super-sized computer screen for ease of reading. At that time she was challenged by macular degeneration. I was grateful she was willing to spend some of her precious eyesight to help me.

Looking back, that must have been close to the onset of Alzheimer’s. Our conversations started taking some very interesting turns, with detailed renditions of things she’d recently experienced that were envied by the fiction writer in me but concerning to the friend. The last time I saw her in her own home she recognized me but didn’t know my name. With conviction she said, “You’re our little girl.”

Yes, Kathy, that is exactly who I am.