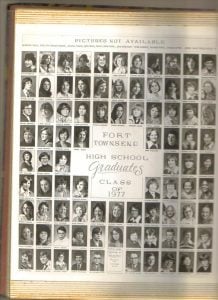 Graduation time. I’m reminded by class photos in the local newspaper and announcements received from the children of family and friends. In my home town, graduates of the local high school will gather for an annual ritual, the Alumni Banquet.

I first attended the Banquet thirty-nine years ago, when my class graduated from Port Townsend High School. My parents, both PTHS graduates, insisted that I go to maintain the tradition. A few of my classmates had their arms similarly twisted. We were seated at an honorary table and tried to have fun but it was apparent most of the fun had already been had at various cocktail parties preceding the event. Dinner was prime rib. Two kids (one of each gender; only two were recognized way back then) received scholarships from the alumni organization and we were subsequently released.

Ten years later, we’d had sufficient time and life experience to appreciate our high school days. The Class of ’77 hosted its own dinner and it seems about half of us (approximately 50) attended. Work, college, marriages, kids and divorces had happened. Some of us had died. Old cliques came together and eased apart. Everyone seemed to like each other better than they had in high school. Oh yeah, and we were old enough to drink.

At the twenty year reunion I found myself wishing we had name tags. In some cases, it was hard to tell which one was the classmate and which one was the spouse. Some of the guys were losing their hair. The women were coloring theirs. Some faces had sharpened, others had filled out. Previously trim tummies had morphed to round. Everybody was dressed like they were someone’s parents. We had a cocktail party. Two decades began to magically melt away. By the time we arrived as a group at the Alumni Banquet, life was jolly. I glanced once or twice at the table of the 1997 graduates. Not many of them, forcing smiles and maintaining the tradition. They had a lot to look forward to in twenty years.

In 2007 we went our own way again. The organizing committee rented the Yacht Club. A classmate who is an avid fisherman manned his salmon-laden barbecue; the rest of it was potluck and BOYB. I couldn’t stay long because my husband and I were moving across the state the next day, but during social hour I circulated my high school annual and asked people to sign it. Why hadn’t I done this 30 years ago? By some odd fluke, the annual had come out several months after we graduated. My parents mailed it to me at college. 30 years later, some of my female classmates asked if I wanted them to sign their married name or their birth name. I told them to choose. One of the best students in our class got into a fit of giggles; she’d been married a long time and couldn’t quite remember how to form a cursive capital “S,” the first letter of her maiden name. Somehow, the three-decade lapse made the inscriptions even better.

These days, many of us are in touch through Facebook. I’m not a huge Facebook fan (especially in a presidential election year) but I’ll admit it’s a joy to see what my classmates are up to. They’re an incredible group. Two of them run marathons. Some have retired! Others are celebrating the graduations and weddings of their own kids. Grandkids have appeared on many horizons. Some valiantly struggle to overcome lifelong addictions and many win. I cheer them all. I smile to see traces of their younger selves in pictures of their kids. I condole and am condoled when there’s a loss.

I can hardly wait to see them next year.