Rhody and the Person Inside 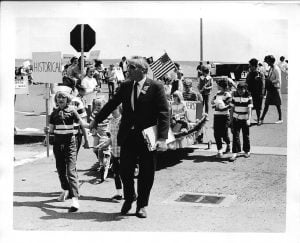 Rhody 1967, Port Townsend, WA. Queuing up for the Kiddies Parade. The grown up is my dad, Glenn Abraham, who served as chairman of this event for many years.

If you’re from a small town, chances are you’re familiar with small town festivals. In my hometown, Port Townsend, WA, we’ve been celebrating the rhododendron since 1936. Officially known as the Rhododendron Festival, for decades the name has been shortened for local use to Rhody.

Like (nearly?) all public events, Rhody- -which would normally be happening right now during the third week of May- -has been cancelled for 2020. Some online efforts are being made to keep the spirit going, but like so many “make do” solutions during the current pandemic and related shutdowns, it’s just not the same as the real thing.

What happens during the traditional Rhody? Parades, 3 of them to be exact. Pet Parade on Thursday, Kiddies Parade Friday and the Grand Parade at 1 PM on Saturday. Court royalty is chosen earlier in the spring; the Queen’s Court and their float participate in other parades throughout the Pacific Northwest. A 10k race, the Rhody Run, was added in 1978. 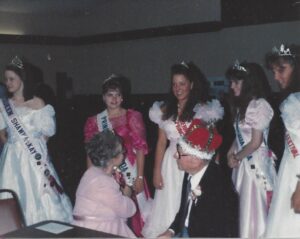 Mary and Dennie Sullivan (my grandparents), Rhody Senior Royalty- -late 1980s/early 1990s? Something about the fog of Rhody tends to weaken my memory for details! 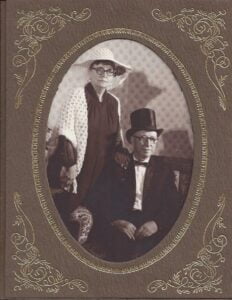 Mary and Dennie Sullivan in their parade outfits. Photo by Reddings.

Other events have come and gone- -bed race, tricycle race, keg toss, beard growing contest, the fascinatingly horrific clam gulping contest. Grand parade favorites like the Road Warriors (think punk-goth) and the famous Port Townsend Ladies Precision Drill Team (lawn chairs are their weapon of choice) were perennial entries we all looked forward to. The crowds along Lawrence, Monroe and Washington Streets were loud with enthusiasm (and many of us, with drink!). Most years the carnival was in town, a favorite meet-up spot for pre- and young teens, where many a fledgling romance was cemented with a ride on the Octopus. . .

I’ve written about Rhody a few times, everything from a sentimental overview:

To the terrifying Rhody of 1972, when my hair got caught in the Ferris Wheel:

Wow, that’s a lot of memories.

Hi Lily, hi 9. Lily, my inner fourteen-year-old, has been with me for over 10 months now. 9, who is 9, showed up last week. All three of us would find something to enjoy with Rhody-as-usual, but this year. . .

2020 is not the first time in Rhody’s history it’s been put on hold. The festival was suspended 1942-1945 during America’s involvement in World War II. Marge Abraham, my mom and the source of most things worth knowing, remembers when Rhody started up again. One particular recollection:

In 1946 or 1947, Mom, Dad (Glenn Abraham, Jr.), Pat (Dad’s sister) and Bill Bennett and Boots (Dad’s other sister) and Vern Jones were having dinner, and quite possibly a drink (though I think some of them were underage. . .). They just “thought it up”: a project to make a float. “Rhody Belle” was made, Mom recalls, out of paper over some kind of frame (my guess is chicken wire). Rhody Belle was a huge, none-too-symmetrical head mounted on a car chassis. They entered her in the Grand Parade and she survived the entire route. Mom says there were floats from other towns that year (Sequim and Port Angeles particularly came to mind) as well as some marching bands. Why did they take on the big, wild project of Rhody Belle in the first place?

“Just to be doing something because we were young and active!” 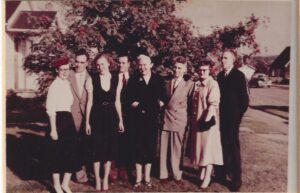 The perpetrators of Rhody Belle, with Gretchen and Glenn Abraham, Sr. (center right), about 10 years after the event. The crew STILL looks “young and active” to me. . .

Rhody’s inherent magic- -small town comes together for a week of celebration, often featuring an excess of food and drink and jubilant reunions with old friends- -makes a lot of us feel that way.

Being an optimist, I assume Rhody will make a comeback in 2021. But what kind of Rhody will it be? I’m guessing the three parades and the Rhody Run will resume, but will they be anywhere near the same scale? Will we still be masked in public and observing social distancing? What about the other events? Will the tricycle race survive? Will we devolve to a barbarian state and re-institute the clam gulping contest (I am an eye witness to the fact that large-scale vomiting is a component of this competition, much like the Barf-o-Rama in the movie “Stand By Me”)?

Time will tell, but more than resting in the hands of time the fate, Rhody rests in the hands of the Port Townsend/Jefferson County community. In recent decades it’s been a struggle to staff this all-volunteer effort with board and committee folk, to round up enough volunteers to set up and judge and clean up after all the bits and pieces that make the festival happen have come and gone. Rhody is and always has been a labor of love.

Being an optimist, I think love, too, will make a comeback.