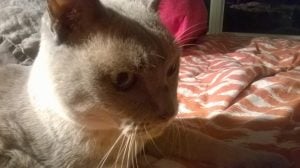 Mr. Lucky, Seattle’s “host with the most” for weary writers.

Every so often I have to leave pastoral Prescott, WA for a day or two in the big city. In Washington State, it doesn’t get any bigger than Seattle, my destination last Sunday and Monday.

You can fly to Seattle from Walla Walla three times a day. In fact, Seattle is the only place you can fly to from Walla Walla on a commercial airline. Given Walla Walla’s reputation as a major wine destination, Alaska Airlines allows Seattle-bound passengers to check one case of wine without charging a baggage fee. A nice perk, if going on a bender once I’d reached the Emerald City had been my plan.

It was not. The reason for rising at 3:30 AM to make the 5:40 AM flight was a writing workshop, “Landing the Gut Punch: Finding Emotional Resonance in Fantastic Fiction” as led by Helen Marshall, award-winning Canadian author, editor and doctor of medieval studies. She’d traveled from Oxford, England, and was almost as jet-lagged as I was. True, my flight was 1 hour and hers was 24, but she’s younger.

If you write Fantastic Fiction (sci-fi, fantasy and horror) you are probably not spooked by the number 13. This was fortunate, as 13 of us showed up for the class. The workshop was held in a Gould Hall classroom at the University of Washington, quite a trek from the light rail terminal on the opposite side of campus. It was an interesting day to cross the campus. Graduation is next weekend but Sunday, June 4, seemed to be photo op day. I encountered several individuals and pairs having their pictures taken in cap and gown, mostly girls who were telling each other how to pose, fixing each other’s hair and giggling. Lots of giggling. I was gladder than ever that I’d opted out of the commencement ceremony when I graduated from UW in 1984.

Which brings me back to the writing workshop. You know, Nineteen Eighty-Four, by George Orwell. Is it mere coincidence that I graduated with a BA in business administration the same year in which Orwell’s dystopian novel was set? In the world of Fantastic Fiction, there are no coincidences.

However, there is emotional dissonance. According to Nikolai Gogol, “The longer and more carefully we look at a funny story, the sadder it becomes.” One of the workshop exercises focused on a character’s emotional reaction to an event being different than what you’d expect. Example (full disclosure: I stole this from a classmate): Another zombie plunges over a violent, cascading waterfall as we, on the riverbank, enjoy our picnic lunch. Characters can have multiple and sometimes contradictory emotions that are not what readers would expect in a given situation. Of course, there must be a valid reason underlying the emotional dissonance.

Much of what was covered in the workshop are things I do, intuitively, when I write. Part of this comes from my background in acting. Actors develop characters from the inside out. Determining motivation is crucial. Hiding some aspect of a character’s history is often a part of the equation. Things happen inside actors as they manage a character’s internal conflicts.

My take-away from “Landing the Gut Punch” was learning how to use what I do instinctively in a more methodical way. We discussed how emotion can structure short stories. Who knew? What I learned should help me write more efficiently and effectively, as well as improve my ability to understand why some stories (my own and those of others) do or don’t work.

Near-graduates were still posing for photos on the UW campus when I crossed back to the light rail station 6 hours later. Were they as giddy and carefree as they seemed? Probably not. If zombies had started rappelling down the side of the undergraduate library, I would have known for sure.