Self-Reliance and the Person Inside 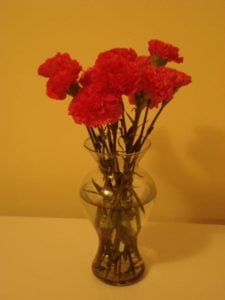 Floral self-reliance: sometimes it helps to buy yourself flowers.

I’m an optimist by nature but unpleasant things do get me down sometimes. This week, I was hit with a string of them. My optimism faded. I became needy and broody and pensive. I started overthinking things, and pining for someone else to show up and get my life back on track, or at least baby me a little bit before I could do it myself.

Not the whole week, though.

Fortunately not, Lily. If you haven’t met Lily, she’s my inner fourteen-year-old. She surfaced last July and has kept me honest and engaged in life ever since. This struggle-filled week she reminded me of the importance of self-reliance.

Self-reliance: the ability to do things and make decisions by yourself.

Lowlights of our week (chime in, Lily, as you see fit):

Sunday is a fulfilling but not exciting day at my house. Morning is centered on big house cleaning jobs- -thorough wipe-down of the kitchen, cleaning both bathrooms, sweeping and mopping the vinyl floors, etc. When I was taking a break after the first hour, sitting in the living room with Hoosegow on my lap and Doc on the couch, I smelled something sulfurous.

They gave me their usual blank looks, which could easily mean guilty as charged. Then a whiff of it wafted up from floor-level. The odor was coming through the heat vents.

It was a total DIY miasma.

Thank you for the colorful description, Lily. I went to the basement to investigate. Sure enough, wastewater had pooled in the furnace room. A context-appropriate four-letter word passed my lips.

How could this be? I’d spent a bundle with Roto Rooter two months ago, when a running toilet and some extra loads of laundry had overtaxed the septic system. The pump was running so hot then that steam shot out of its chamber when the hatch was lifted.

A creepy cool effect, but who needs a repeat?

Exactly, Lily. I figured this time the pump had packed it in. It had started up fine after the November incident but I’d been advised that it might not last too long. Someone came by to fix the running toilet a couple of weeks after the initial incident. He was supposed to check the pump, too, but said since was still running after 3 weeks. . .It made perfect sense at the time, but my decision not to pursue a pump replacement then was now a lesson in being penny wise and pound foolish.

Turns out it wasn’t just the pump this time, which was wearily past its prime but still running: the galvanized pipe in the pump’s chamber had rotted and fallen in.

You remember last Sunday, right? The second day of a 3-day weekend. Roto Rooter’s “after hours” person could neither drive the pump truck (no CDL) nor was he trained to replace the pump. I thanked my lucky stars (again) for the commode stashed in the basement and toughed it out until Monday morning. Order was restored before noon.

So that happened. On Tuesday morning, I had an overall screening with a dermatologist, for the first time in years. A bump on my left eyebrow had been bugging me for a while and he determined immediately that it was skin cancer, not life-threatening but it needs to be removed. Three biopsies were taken- -one for sure, one probable and one possible. The official results will be available sometime next week.

You were brave when he carved you up.

Only on the outside, Lily. I’d suspected there was an issue with the thing on my eyebrow, and I did hear the part about “not life-threatening” but it’s hard, I think, for most people not to feel scared when the word cancer is applied to them. I had Spanish class that morning, too. The biopsy incisions started to throb as I strained to understand the language that comes a little easier now than it did two weeks ago. I wanted to chicken out on the weekly grocery shopping afterward, but these days I’m so busy if I let something like that slide. . .

So on I went, ouch and ouch and boo-hoo-hoo for me. At our second grocery stop, Lily asked me a question:

If someone were here and wanted to do something to make you feel better, what would you want them to do?

Great question, right? And a useful one to ask when you live by yourself.

That is, when it’s just you and your inner fourteen-year-old. At Andy’s, the premiere local health food store, I picked up a bunch of hot pink carnations and a bag of white peony tea. Simple stuff, but magic because caring is magic. The tea is delicate and soothing. When I look at the carnations I think I’m here, and I matter.

You the world champion at forgetting that.

You’ve nailed it, Lily. For two or three days I drug us down the “poor me” rabbit hole, missing Bruce’s presence, logging into Facebook like I was a starving rat and it was the lever in a Skinner box, wanting someone to fix it all for me. But even when we’re surrounded by people who love us and look out for us, the only person who really has to power to make us happy is. . .

Don’t give up on me, Lily, I might be a slow learner but you’re getting through. Self-reliance, I need to remember, is not only about keeping the house clean, paying the bills, completing writing projects, doing my school work and making sure the 4-leggeds kids are happy and healthy. It’s about keeping me happy and healthy, too.