Septic Disaster and the Person Inside 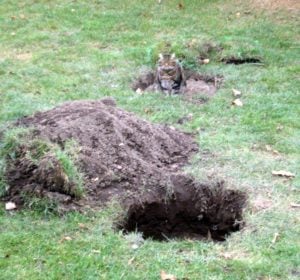 Hoosegow, literally on top of the septic system  project.

Just when you think things are rolling along nicely- -you’ve stocked extra groceries in the freezer in case Snowmageddon makes an early appearance, laid in plenty of dog and cat food and cat sand against the same, stowed sufficient toilet paper to make it to and through 2020- -stuff happens. Sunday evening I descended to the basement to feed Piebald, the semi-feral cat who sees the wisdom of sleeping indoors when the nightly lows are below freezing. He was standing at the bottom of the stairs cussing me out! It took me a moment to realize that he was standing on a high spot between puddles. Falling back on my good vocabulary (as Mom calls it) I thought Oh effluent. The nose knows when the septic tank is to blame.

That’s Lily, my inner fourteen-year-old. She’s never lived with a septic system but I guess she’s got to learn sometime.

I could have been upset, but I wasn’t. Baffled, more like. The septic tank had been pumped out when we bought the house in May, 2018. For almost a year it’s been only me sending regular deliveries to the tank, just one person who, after several tour seasons living on a bus conversion with limited black and gray water tanks, is mindful of using as little water as possible.

Sunday is, of course, the worst day of the week to find a plumber. By Monday morning I’d rounded up a local guy. He ran a snake from the drain in the basement to the septic tank: no clogs. He then dug up the septic tank to have a look. Water was nearly to the top of the 8-foot drop above the tank. He said he couldn’t trouble-shoot it until it was pumped out, a service he didn’t offer.

Did you know that Thanksgiving week is “tourist season” for plumbers? It has to do with septic systems getting overpowered by eighteen people using the toilets in houses designed for a family of four. A highly recommended local plumber was booked for the entire week. I called two more local services, left messages: as of today, neither of them has called back. Roto Rooter was next on my list. They set me up to be rescued late that afternoon.

But I have to pee now!

I am so with you on that, Lily! And I was grateful that I’d purchased a commode for a frequent overnight guest who needs extra height and support when it comes to- -well, you know. Of course I was entirely out of Pine Sol and hand sanitizer. Sunday night found me at Albertson’s, stocking up on both. Once the commode was hauled upstairs and placed in front of the toilet (so I wouldn’t forget the state of affairs in the middle of the night), a measure of Pine Sol was poured in the bucket and Lily and I were in business.

But, you know, still yuck?

Better than the cat box. Lily.

By noon Monday, after the first plumber had left and I awaited the Roto Rooter person, ye olde commode bucket was about 1/3 full. What if Roto Rooter couldn’t solve the problem that day, if they needed to order a part or something? I tried not to think about how old the septic system might be; the house was built in 1948. Suddenly I was visited by the Ghost of Septic Past, the vision of my maternal grandfather decades ago, in his shirtsleeves, standing in a hole in his and grandma’s back yard, shovel in hand and actively slinging mud one dark and rainy Thanksgiving night. The grown-ups said “drain field” in hushed tones. My sister and I were instructed to “hold it” until we got home.

OMG, what a horror story!

I’m sure Grandpa thought so too, Lily.

Wondering how long the commode will be my best evacuation option, I was also hoping that holiday septic system failure is not genetic. I think of my next-door neighbor, Jess. Kind, supportive Jess. Fingers crossed, I send her a Facebook message about my dilemma and ask as ingratiatingly as possible if I could please, please, please empty my little bucket down one of the functioning toilets at her place. Within minutes I get the laugh emoji and her delight that this is my problem, not hers. And yes, I can certainly dump the excrement (another word from my good vocabulary) at her place. She’s at work but her house guest, whom she’d notified, greeted me at the door. Jess’s dog, Licorice, a puppy at this time last year and now the size of a Shetland pony, was highly interested in the contents of the bucket and guarded it all the way to the bathroom threshold. Good boy. I immediately shut the door to prevent his further assistance.

It was dark and rainy when the Roto Rooter person, a surprisingly clean man named Chase, appeared at 4:15 PM. Yes, the septic tank was flooded. He dug up the other tank that had the pump in it, which was likewise, the pump running for all it was worth to absolutely no effect. Chase dragged a sturdy black hose, plus at least one extension, into the back yard and proceeded to pump out the tanks. The pump, once uncovered, was so hot that steam shot out of the cement-lined hole. Chase asked about my water usage.

I confessed to doing three extra loads of wash on Sunday (in addition to the usual weekly two), washing Bruce’s casual clothes that, after eleven months, I’d culled from his closet for donation to the homeless shelter. Chase nodded, asked to see both toilets. The one in the guest bath was running ever so slightly, but, he assured me, in combination with the extra loads of wash it was enough to overwhelm the septic tank and disable its ability to move water into the drain field. He shut off the water supply on the guest toilet, said I needed to get someone in to adjust the water level in the tank.

Sanity was restored to my household by 6 PM. Chase recommended I have someone from Roto Rooter come by in a few weeks to check the septic system pump to make sure it was still operating properly after working way too hard during the flood, also to reset the water level in the rogue toilet tank. With a renewed and visceral understanding that the miracle of successfully draining waste water from my house was a bargain at any price, I agreed to set this up with Roto Rooter ASAP.

And this is never going to happen again, right?

No guarantees, Lily. House holding is a complicated business and septic systems sometimes seem to have their own agenda. But I do keep a list of routine maintenance items. Getting the septic pumped out is on that list- -for May, 2023. But sometimes, feces happens.

Like realizing why normal things have seemed hard to do this week, things like eating and sleeping. The year following a significant death is a year of “firsts” for the survivors. Just yesterday, I realized Thanksgiving is my last “first” time observing a holiday without Bruce. Last year he had insisted on making Thanksgiving dinner as he always had, though this time he was often doubled over in pain. An ulcer had been correctly diagnosed and that was all we thought there was to it; the CT scan suggesting liver and pancreas cancer would come the following week. Recognizing this last “first” holiday anniversary has calmed me down substantially.

I think I’ve heard that before somewhere, Lily.

But you’d never looked down into a septic tank while it was being pumped out. It didn’t smell as bad as I thought it would and watching it was, you know, kind of interesting.

Yes, it was. And the steam rising out of the pump tank was like a movie effect for a fog of dragon’s breath. Learning more about how systems work and problem-solving for dozens of little things that have come up these past eleven months are positive aspects of being on my own.

On your own with me!