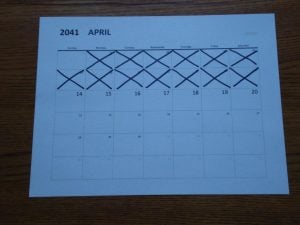 What will happen on the Seventh Day?

In honor of the 2016 presidential primaries, for the next three weeks I’ll be posting an original short story in sequel format. The Seventh Day, published for the first time in this blog, was written in the aftermath of the 2004 presidential election. Happy reading.

Joe Miller awoke at his 821 Acorn Street home expecting his wife, his coffee, and his regular 8 AM newsgram. He got two out of three.
“Greetings, my fellow Americans,” said the foot-tall hologram of President Stanton J. Laurel that projected from the middle of the breakfast nook table.
“What the heck is this?” Joe said, looking over the top of Laurel’s head at Marge, his wife of forty-two years, who sat opposite. “Where’s Marshall Webb with his Sunday commentary? I’ve been waiting all week to hear what he thinks about the market slide.”
“As your President, I’ve taken the liberty of preempting regular programming to share with all of you some great news for all of us in the Theocratic Republic of the United States of America,” said the hologram.
Joe groaned. “Last time he said that, he doubled our taxes.”
“He looks thin,” Marge said. She sipped her coffee, eyebrows puckered. “I think he’s lost weight since the war ended.”
“The Theocratic Republic of the United States of America is proud to announce its new economic program, which we humbly call New Genesis.”
“More marketing hype,” Joe said, crossing to the coffee maker to refill his mug.
President Laurel cleared his throat, adjusted his red power tie and showed his teeth. “You folks can’t imagine how much easier it is to work without the delays caused by the legislative branch of government. I’d like to thank each and every one of you, again, for voting to dissolve Congress in the last election. Consolidation of decision-making, that’s what the Theocratic Republic is all about!”
“Not all of us voted that way, buster,” said Marge. “Only fifty-one percent!”
“Like that damn Phyllis next door,” Joe grumbled.
“Hush now, Joe, she’s been a good neighbor.”
“You, the citizens, have put the power in our hands to end war, shortages and poverty. Yes, my fellow Americans, for the first time in the history of this nation, your government is in a position to do what you want us to do!”
Cheering and applause from an unseen crowd bounced around the image.
“Worse than those old sitcoms with the laugh tracks,” Joe said on his way back to the table. He reached for the holocom off-switch, then stopped, his stomach churning.
“In developing New Genesis, the Cabinet and myself have given prayerful consideration to the results of the 2040 nationwide survey, where we asked each of you to list your top ten concerns about the health and vitality of this great nation.” Laurel flashed the down-home grin that had won him the past four elections. “Your number one topic, hands down, was getting closure on the Crusade thing, and I am pleased to say we’ve whipped the Infidel and brought our robofighters home!”
Cheers rose again from the invisible audience as the president raised his arms above his head in the “v for victory” gesture he’d used in the last campaign. Joe and Marge looked at each other, shook their heads and sighed.
“Could have ended the war years ago, before the market crash and the recession,” said Joe with a snort. “Who voted for this joker, anyway?”
“New Genesis will be implemented over the next six days. On the seventh day, we’ll rest.” Again the figure beamed his folksy grin, raising an appreciative chuckle from the onlookers at the transmission site. “Starting this morning at 8 AM, we’ll announce each of the six phases, one per day, to be implemented the following day. Phase One.” The president paused to turn slowly in a circle, nodding and making eye contact with viewers on all sides of all the in-home newsgram holos across the nation. “Effective one second past midnight tonight, Eastern Standard Time, we will put an end to hunger in the Theocratic Republic of the United States of America.” Sounds of amazement emanated from unseen mouths. “Our brave patriots, the robofighters, have been reconfigured into nanobots designed for peacetime activity. At one second past midnight tonight, each household will be serviced by a team of nanobots, too small to be detected by the human eye, who will remove all existing food, food which is produced, as you all know, with great inefficiency and expense.”
“We just traded our aerocar for a side of beef!” Marge said, shaking her fist at the unseeing head of state. Joe gestured to her to be quiet, missing a couple of phrases that ended with, “. . . to end hunger in this great Theocratic nation, with an efficient, economical soysynth fabricator in every kitchen.” Once more Laurel raised his arms in a “v”: once more the invisible crowd cheered. The president’s grinning image flickered and disappeared.
Marge gulped down her coffee, slammed the empty mug on the tabletop and strode into the pantry. She emerged in seconds, an apron emblazoned with “Kiss the Cook” tied over her pink chenille bathrobe.
“Call the kids, Joe. Call the neighbors. We’re gonna have one hell of a barbecue!”

Joe couldn’t sleep that night, stuffed full of barbecued beef, potato salad, corn bread, coleslaw and apple pie with ice cream. Shortly before midnight the hum of an airtram drifted down Acorn Street and through the Millers’ open bedroom window, passenger doors opening with a barely audible hiss. The humming and hissing grew louder as the tram neared number 821, then died out as it continued toward the nine hundred block. Joe rolled out of bed and poked his feet into his slippers. “I’m gonna check this out,” he said. Marge, on her back with her arms crossed over her stomach, grunted but did not rise.
Joe padded down the hallway and switched on the kitchen light. No food was out in the open, Marge would never allow that considering bugs, bacteria and the like. He crossed to the refrigerator and opened the door. A half gallon of milk and that last bit of coleslaw that no one had room for glowed in the harsh inner light. The grandfather clock, a family heirloom, tolled twelve.
“Usual snafu,” Joe said to himself. “Laurel never could get the job – -”
That’s when it started, when the plastic milk jug started to vanish from the top down. The slaw disappeared as if a zipper raced the width of the bowl from one end to the other, erasing both contents and bowl as it swept. By the time Joe looked in the pantry, the nanobots, invisible specks of last year’s war heroes, were rapidly obliterating pasta, canned goods, and the last four pints of Marge’s prize-winning pickled okra. A spigot formed on the far pantry wall, a “soysynth” label appearing above it.
“Piped in from the outside,” Joe said, his jaw slack. A hose formed at the end of the spigot, snaked across the pantry shelves and bored through the wall into the kitchen. Joe followed the hose to its connection point, a toaster-sized fabricator on the counter where the coffee maker used to be.
“Marge isn’t gonna like this,” he said to the fabricator, wondering if the nanobots were still on premises and would report customer dissatisfaction to the Cabinet. Marge sure as hell would, he’d bank on it.