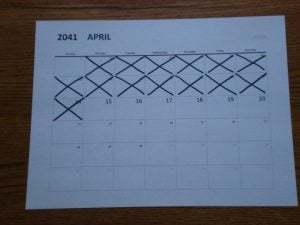 On day one of New Genesis, our food supply was replaced by the soysynth fabricator. What will the Theocratic Republic of the United States of America take from us on days two, three and four?

Though she argued with the fabricator every step of the way, Marge figured out how to make soysynth coffee, Joe’s black, hers with milk and one sugar, by the time Laurel’s broadcast fired up at 8 AM on Monday.

Marge took a sip and wrinkled her nose. “Tastes funny.”

“Yeh,” Joe said, not tasting anything he was so preoccupied with the figure materializing on the breakfast nook table. President Laurel appeared in the same gray flannel suit as yesterday, the same red power tie.

“Greetings, fellow Americans,” he said, grinning from ear to ear, “and thank you so much for the outflow of positive support for Phase One of the New Genesis economic plan. We at the Oval Cathedral have heard from hundreds of thousands of you this morning, voices from every state of this great nation, calling in to our databanks. Now it’s true we haven’t had time to respond to every message – -”

“Like mine, you little twerp,” Marge said, raising her mug in mock salute.

“. . . as we promised, an end to hunger in the Theocratic Republic. After last night’s success, I’m sure you’re all eager to hear about Phase Two of New Genesis.” The figure’s expression transformed from jubilant to serious. “A major concern for many of you in the 2040 survey was American consumption of personal goods and the impact on the balance of trade.”

“There’s some sense in that, anyway,” Joe said.

“Your fear that our economy is being overrun by foreign-produced clothing with built-in fashion obsolescence topped the list of consumer worries.”

“The crap kids buy, and on credit,” Marge said, stroking the lapel of her faded chenille bathrobe.

“As your leader, I’ve heard your concerns. Putting the good of the nation first, the Cabinet and I met with our nation’s clothing manufacturers last fall. We’ve signed an agreement with those manufacturers to contract one hundred percent of their services to our government. Under a veil of secrecy, factories have been retooled and production is at full capacity.  Effective one second past midnight tonight, Eastern Standard Time, all citizens will be issued a wardrobe of jumpsuits, made right here in the Theocratic Republic of the U.S.A.”

“What!?” Marge hoisted her womanly bulk out of her chair and paced the kitchen floor. “For crying out loud, this country is not one-size-fits-all!” She sucked in her breath and tightened the belt of her robe. “That idiot’s gonna have us looking like a bunch of auto mechanics!”

“. . . and further, the benefit of dirt-resistant, tear-resistant, stain-resistant fabric, conserving limited resources and . . .”

“We wouldn’t be in this mess if you hadn’t started the Holy War and let it drag on for twelve years!” Marge said, wheeling on the holo and shaking her fist in its face.

“. . . and don’t worry, ladies, these jumpsuits are programmed to expand where you expand.” Disembodied masculine chuckles erupted as Laurel’s grin widened. “Believe you me, Mrs. Laurel insisted we make that one of the features.”

“I hope that fat cow sits on him – – hard!” Marge stormed down the hallway toward the bedroom.

“. . . will be returned to the manufacturer and recycled after the death of the wearer. As happened last night with your food supplies, at one second past midnight Eastern Standard Time, nanobots will remove all existing clothing and fashion accessories from your homes. For your comfort, although this is not in complete accordance with Theocratic principals of conduct,” Laurel cleared his throat, “it is recommended that when you retire this evening, you do so au natural.” Disembodied murmurs of consternation simmered around the figure.

Marge emerged from the hallway, shimmering in the stretch fabric sequined gown she’d bought for their cruise fifteen years ago. A turquoise feather boa rested on her shoulders; a foil tiara from last New Year’s Eve perched jauntily atop her head. She stalked toward the hologram and planted her hands on her hips. “Hah!” she said, leaning down to its doll-sized face before collecting the half-full coffee cups and dumping the soy-based contents down the sink.

She was sulking Tuesday morning. “At least they could have left me a scarf, or a belt, or something,” she said as she fussed with the collar of her navy blue jumpsuit. Joe said nothing, thankful that Marge didn’t ask if her Amerisuit made her look fat. He sipped his fabricated coffee, to his palate no better and no worse than many a cup he’d tasted over the years. Truth to tell, his gray duralite jumpsuit beat his usual slacks and shirt for comfort – – no binding when he sat down. “Nearly eight,” he said, nodding toward the center of the breakfast table.

Laurel’s holo appeared on schedule, brightening to full intensity on the last stroke of the hour. His jumpsuit was gray pinstripe and somehow hung better on him than what Joe had seen in the mirror this morning. Tailors, he supposed. There’d always be a difference between the powerful and wealthy and the common citizen.

“So what’s it tomorrow?” Marge asked the image. “Today’s been so much fun, I can’t imagine how you’ll top it.”

“Greetings, Citizens. I’m sure you’re all enjoying the carefree comfort of our team uniform.” Invisible chuckles. Joe checked his impulse to nod in agreement, lest Marge should notice. “It will interest you to know that factories all over the world are trying to copy us. China just unveiled the prototype for an imitation Amerisuit but don’t worry, citizens, we’re going to keep the manufacture of our clothing at home.” Cheers. “Thank you, thank you,” Laurel said, gesturing for quiet. “Wonderful as it is, that’s yesterday’s story, and we need to talk about today. The 2040 survey made us, your government, highly aware of your frustration with commuter gridlock. Combining this with the interruption of fossil fuel supplies- -”

“It’s not our fault your bots lost the Crusade,” Marge said, her face so close to the holo she could bite it if it were solid.

“. . . the collection of all privately owned vehicles in Phase Three of the New Genesis Economic Plan, to be replaced with mass transport.”

“Thanks a heap, shrimp.”

“The collection process will begin at – – ”

“ – – one second past midnight tonight, Eastern Standard Time,” the three of them, and possibly half of the citizens of the Theocratic Republic of the United States of America, said in unison.

“For once we got it right,” said Joe, thinking of Sunday’s barbecue. “We ate our aerocar before they could grab it.”

“But how am I going to do the grocery shopping?” Marge said. “I was counting on Phyllis next door to take me when she does her weekly . . . oh, right,” she finished, eyes turned to the soysynth fabricator.

Joe reached across the table and patted Marge’s hand. “At least we’re retired. This one’s gonna be hard on the kids, though.” Joe Junior and his wife lived in a suburb, an hour-long commute from the chemical treatment plant where he’d just been promoted to foreman. “I hope old Laurel thought this one out good.”

The Millers slept better that night, relieved that no taken-for-granted way of life was going to be snatched from them, personally, at one second past midnight Eastern Standard Time. Marge even admitted her fuzzy pink Ameri-Sleep-Suit was plenty good for keeping her warm that chilly April night.

Marge deigned to fabricate herself a second cup of coffee by the time Wednesday’s newsgram materialized. Joe smiled at his wife, thinking back on the early years of their marriage and the struggles they’d overcome. He stood up, leaned across the breakfast table and kissed her on the cheek. Her face turned as pink as her jumpsuit, but she smiled, too.

“ . . . Phase Four, as the natural extension of Phase Three. All active members of the workforce will be replaced by mechanized labor where needed and with nanotechnology-based fabrication. It’s a sad reality, citizens, but this country’s infrastructure, much of it sacrificed with your consent to the needs of the Crusade- -”

“What is this, some kind of joke?!” Marge glared at the holo, then at Joe. “What’s Joe Junior supposed to do with his life? And his kids, what will they do?”

Joe shook his head when Marge took a swing at the holo, her fist passing through it with such force she nearly fell out of her chair. She steadied herself, eyes blazing. “What’s left? Can you tell me what’s left, Joe?”

Joe worked the soysynth fabricator himself at lunch time. “Spaghetti and meatballs,” he said and watched his request materialize, plate and all, in the single serving bay. He ordered tea and toast for Marge, but she waved it away. “No work, Joe. No work. What will people do with their lives?” Joe ordered some jam for the toast and ate it himself, knowing it was best to leave her alone when she was thinking this hard. Maybe she’d call next door and talk to Phyllis, like she did sometimes when things were on her mind.

They tried to talk to Joe Junior that night. Alice, his wife, answered the phone. A bot had delivered a box holding the contents of Joe Junior’s locker from the plant that morning, for which Joe Junior had signed. Then he’d left, not for his last scheduled day of work but for the nearest bar, said he didn’t care if the beer was soysynth. No, he wasn’t home yet, but the bartender had called to tell Alice that Joe Junior was all right, that he’d put him on the airtram at closing time.  “He’ll be okay, Pop,” Alice said to Joe. “Mostly, he’s upset because he doesn’t want to let you down. He’s always tried to make you proud, and when he got that promotion . . .” Her words faded to a sniffle. “Like the Theocratic Republic is giving him a choice,” she muttered. “’Night, Pop.”

Later, when they got into bed and turned out the lights, Marge was crying, and heck, Joe had to hold back a tear or two himself.