Shock and the People Inside 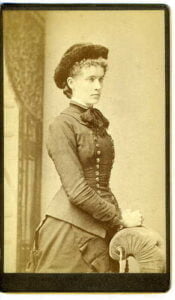 Nellie Gilliam Day: the last person I expected to put me in shock.*

One of many things I enjoy about writing is research- -learning about unfamiliar topics through reading, site visits and talking to experts in pertinent fields. Research is an important part of portraying historical figures, too. Lately I’ve been digging into the life of Ellen Margaret “Nellie” Gilliam Day, whose story I am presenting for Fort Walla Walla Museum’s Living History program, September 18, 2022. Who knew my inquiries would land me in a state of shock?

Remind me who she is again?

Gladly, 9. Nellie lived from 1854 to 1940. Much of her life through 1920 is recorded in her own writing and in public records, but for her last 20 years little is available. This week I’ve been corresponding with the Washington State Archives, searching for clues. I knew that Nellie was in the Seattle area from approximately 1930 to 1940, but I had no idea where she lived or what she was doing.

As luck would have it, an archivist named Jewell found a copy of Nellie’s death certificate. I eagerly clicked on the file and discovered that- -was I reading this right? Having made a few brief presentations as Nellie last year- -a vital, well-educated and dynamic person in Walla Walla’s history who’d been elected the county’s first female school superintendent in 1886 and was the first female employee at the Walla Walla Evening Bulletin two decades later- -I’d developed a mental picture of her actively enjoying city life throughout her last decade.

On the computer screen was the shocking reality: for the last 8 years, 11 months and 1 day of her life, she’d been a patient at Northwestern State Hospital, a mental institution in Sedro-Wooley, Washington. Cause of death: senility.

Stranger than this was realizing that I took the news personally.

I can relate. When actors take on roles part of them becomes the character they’re portraying.

Thank you for that insight, Lily. If you are a non-actor and are reading this, let me provide an extreme imaginary example of this phenomenon. What if Hal Holbrook, who portrayed Mark Twain in a one-man show for more than six decades, discovered the famous American humorist was a serial killer?

Mark Twain was a serial killer?

No, 9. Not that I know of, anyway. But if he had been, I’m sure Hal Holbrook (who passed away last year at the age of 95) would have felt terrible about it, felt responsible, somehow, given his investment in the life and personae of Twain. He may even have gone into shock.

You know that’s not really true, though, right?

Intellectually, yes, Lily, but emotionally it’s taking me a while to recover. I’m digging deeper and have sent a public records request to King County Superior Court, following a clue from the Walla Walla County Clerk who found a case number for the probate of Nellie’s estate there. The clerk told me Nellie was under a guardianship at that time, and that a house she owned at 415 E Main Street in Walla Walla (torn down years ago, now) was disposed of through that probate. I’m hoping to learn the name of her guardian, also who ended up with her house. 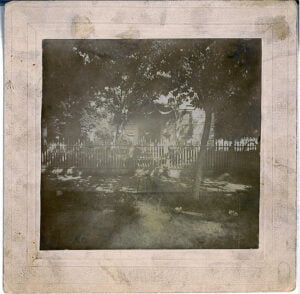 Speaking of the house, my friend at the State Archives noted that both the 1900 and 1910 census show that Nellie had taken in lodgers:

Strangely, my paternal grandfather’s first wife, Effie Gladys Barnes Abraham (who died in 1921), was the granddaughter of Martin B. Buroker. Now I’m wondering if she was related to the Buroker girls who boarded with Nellie?

I’ve also been working with Joel at the Whitman College Northwest Archives. Though the Archives is currently closed to the public due to COVID, he’s provided me with electronic access to Whitman’s annual catalogs, which list faculty and students during Nellie’s time there (approximately 1884-1888). She was the lead instructor for the Normal School (teachers) program. This work seems to have tapered off when she also served as Walla Walla County School Superintendent, 1887-1889.

Joel also sent links to various electronic newspaper collections. In two brief paragraphs in the November 7, 1889 Seattle Post Intelligencer, I learned that the wedding of Nellie Gilliam to Jesse Newberry Day (the founder of Dayton, WA) was not only one of the most fashionable weddings of the season, but that the groom had presented the bride with $75,000! This was a pleasant shock. As best as I can determine, the amount would be more than two million dollars in today’s money.

Wow! And I was excited when Uncle Dennie gave me $15 for my birthday.

I remember it well, 9, a great day back when our weekly allowance was fifty cents. At this point I’m wondering not only if the amount of the gift Jesse made to Nellie is for real, but, if it was, what happened to it? Jesse died in 1893 (he was substantially older than Nellie) and, outside of his interest in the “Day Block” in Dayton, he left his estate “share and share alike” to Nellie and his six surviving (then adult) children. If she had all this money, where did it go between 1889 and 1900, when she was taking in lodgers?

And what about a parting tidbit from Jewell at the State Archives, that Nellie was in Long Beach, WA, doing some newspaper work in 1920? I’m waiting for a reply to the email I sent the Pacific County Historical Society to see if they have information about the area newspapers at that time, and possibly about Nellie, herself. 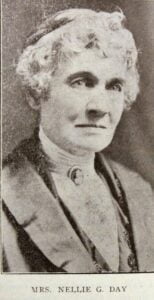 Nellie, c. 1920, the year she was doing some newspaper work in Long Beach, WA.

This has the makings of a detective novel.

I think so, too, Lily, and maybe memoir potential, too. There are some interesting parallels between Nellie and me- -writers, widows, no children, living in Walla Walla. Not to mention sharing an identity a couple of hours a year for the entertainment and education of the general public. I also feel connected to her as if we are friends- -the shock of discovering her sad end; my empathy for the outgoing, brilliant, progressive woman who spent her last decade in a mental institution.

It feels like a story that needs telling. Perhaps this is the beginning.