So, You Married a Writer 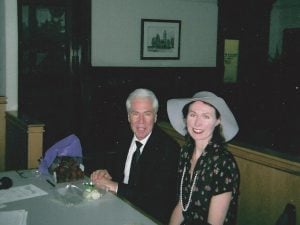 With Bruce Matley, minutes before he married a writer, February 13, 2006

Writers, sometimes, get a bad rap. We’re characterized as brooding, overly sensitive, obsessed with our work. Writers with young children at home are known to say, “Don’t interrupt me when I’m writing unless there’s blood.” This week I’ve enlisted Bruce Matley, the brave man who is my husband, to look beyond the stereotypes and share his thoughts on life with a writer.

We first met when you hired me to play bass in a music trio. My “day” job was accounting. When did you first realize I was also a writer?

Not long after we got together (which is not the same thing as when I hired you by a few months), you told me you had once had a story published by one of those “true confession” magazines.  You also gave me an unpublished Romance novel you had written some years before to read, and shortly thereafter we both went to a Romance writers’ convention in Western Washington.  After we began to hit the road seriously, in late 2003, when you started working hard on short stories, many of which were published, you enlisted me as your “first reader.”  More on that below.

You are free now to concentrate on your work without more distraction than that provided by the cats and dog (also me).  The trick is to pry you away from it somewhat, because you can and do obsess.  You’ve been much better about that in the last two or three years.  It is very nice, however, to have you nearby all the time, except when you travel to workshops and conferences.

To what extent are you involved in my writing?

As “first reader,” my job is to read your work, usually around the second draft stage.  I am invited to make comments and offer criticism.  This is not the same thing as the line editing you later get from Martin McCaw, rather it involves learning the shape of the story or book, offering suggestions as to word use and characters, and the like.  An example is a short story you wrote some years ago [editor’s note: “His Own Medicine,” available here: http://peglegpublishing.com/glassfire14/medicine.htm] which I found to be overloaded with extra characters.  This diluted the plot and muddied the narrative.  When I pointed it out, you took the extras out.

A real treat for me has been watching your improvement in style, plotting, and especially use of language as these skills continue to evolve.  You are a remorseless editor of your own work – much more so than in earlier years – going over and over the text in order to pare excess words (the infamous adverbs especially), clean up scenes, adjust plot, add scenes as needed, etc.  This starts with you marking up the text after printing yourself a work copy, and goes right down to reading each word to yourself aloud, start to finish, sometimes more than once.  In short, your work is much cleaner, more clear than earlier on.  I’ve noticed that publishing editors rarely have much they want changed.

Otherwise, my involvement means staying out of the way. [editor’s note: Bruce, who has substantial acting chops, has also joined me at readings for Small-g City and Big-G City. His portrayal of Ralph, the burned out immortal who reinforces Seattle’s Alaskan Way Viaduct by disbursing his molecules through it, is a “must see.”]

If you could change one thing about life with a writer, what would it be?

Well, the obvious thing is wishing for financial success for you.  I still believe that will come.  What I would change while waiting is the amount of stress you generate about that. You are somebody who insists on paying her own way.  I know that is ingrained in you. However, I’d like to convince you that what matters is the work itself, and money has less to do with it.

What are your best/worst moments, living with a writer?

It becomes lonely despite your presence in the house during your work day.  And you write every day, or work on marketing, or some combination of the two.  I try not to interrupt.  You stay at that computer for too long some days, and I then have to gently try to pry you away.

Among the best things is the finish of your work day. When you’re done, you’re done. This too is very regular. Our chief entertainment of an evening is me reading books aloud to you, and we have done this with hundreds over the past seven or eight years, from Dickens to John D. MacDonald to Terry Pratchett to Christopher Moore to Agatha Christie. This I love very much.

Too, I remain amazed at your imagination, and your method of letting the story shape as it goes, to the point that you might not know where it’s headed during the process.  The story, you say, takes over.  By contrast, when I write a short story (admittedly an infrequent occurrence), I have to know the shape of the whole thing before I can begin writing.

What would you like other people to know about life with a writer that hasn’t been covered in the previous questions?

Stand your ground, but offer every bit of support you can muster. Do this on all fronts. Be prepared for the long haul.

HUGE thanks to my beloved, Bruce Matley, for his evergreen support and insights. And honey, I promise I’ll get up from my desk, just as soon as I finish this one little thing. . .