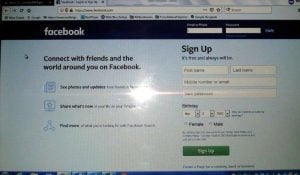 One portal to social media- -enter if you dare!

Social media- -Facebook, Twitter, Instagram and the rest of it- -has wrought significant change in human communication. Though I’m not a dedicated social media user, I have been on Facebook for over six years. My experience with this platform has been, for the most part, positive. It’s wonderful to get in touch with old friends after years of silence and fun to post the occasional “Throwback Thursday” photo. Who doesn’t get a smile and a laugh out of decades-old prom pictures?

However, social media, by its very accessibility and fluidity, is capable of spreading anxiety, stress and sometimes evil.

Recently, a friend of mine learned that her mother had died through one of the social media platforms. A family member who heard she’d passed away had made a social media post before everyone who needed to be was informed. My friend received a condolence message from her daughter, something that arrived on her iPhone in the middle of a busy work day. She had to keep it together in front of her classroom of sixth graders until she had the opportunity to be alone.

Innocent mistakes like this happen. Someone posts about a death, a birth or an engagement before letting their family and close friends know, one on one. The compulsion to share sadness or joy overrides the courtesies established in less high tech days. Many of us still need that personal call, or at least an email, to feel properly informed and given an opportunity to reflect and respond before the rest of the world clamors in. We experience anxiety, stress, a sense that we are not respected given our real-world closeness to the situation.

I find it sad and scary that communication short cuts are trampling human emotions. Often, the perpetrators don’t even realize they’ve done something hurtful- -it’s the high speed world they’ve grown up in without knowing any other. If you know someone like this, I hope you’ll consider giving them a box of stationery and a book of postage stamps the next time a gift is due.

Far worse than innocent mistakes are social media posts intended to inflame, insult or harm. As a writer and performing artist, I have a pretty thick skin about constructive criticism; not so much when people attack others or aim to spread falsehoods and distress. In the wake of the Kavanaugh hearings, some absolutely grotesque posts were being made to demean Dr. Ford, her testimony, and survivors of sexual assault. Some of these posts were merely stupid, easy to “hide” on my news feed. But one made me sick in heart, soul and body.

Can anyone explain to me why a lawyer would re-post raunchy “party girl” photos claiming to feature Dr. Ford, and to infer that she got what was coming to her? There’s an easy way to check this kind of post to verify if it’s real or fake. In this case I checked the post on Snopes, an online fact-checking site and reference source. Not surprisingly, the photos were not Dr. Ford and had, in fact, been available online for years. Snopes backed up their findings up with lots of forensic evidence. I guess this particular lawyer missed the day in law school when they covered defamation of character. As for me, I didn’t sign on to Facebook for a week.

Social media can be used for wonderful purposes if we choose to use it that way. For example:

One Minute–In 2016 a high school friend of mine launched this group on Facebook. Every Wednesday, 6-6:01 PM Pacific Time, One Minute hosts an event for anyone who wants to participate, from wherever they may be. We simply take that One Minute to send the world our prayers/meditations/thoughts of compassion, love and peace.

Photographic campaigns of support–Last fall a young woman in my home town was undergoing breast cancer surgery. Her mother-in-law requested that all her Facebook friends post pictures of themselves wearing a pink shirt to show their support. As a breast cancer survivor, you bet I joined in. So did lots of other individuals, but what blew me away were the group photos people sent of themselves and their coworkers! It reminded me of the first time I witnessed a “Tough Enough to Wear Pink” event at a county fair rodeo. My husband and I were contracted to play western music near the rodeo arena. As starting time neared and hundreds of people flocked in, every one of them was wearing pink! Even the “too cool” teenagers sported pink bandanas. Though none of these people knew me, or that I was a breast cancer survivor, the feeling of support I experienced brought tears to my eyes.

Bottom line- -social media is a tool that can be used for good, for bad or for ugly. Some social media users will use these tools to bully, threaten and demean others. Most of us will share an opinion from time to time; no harm in that, if the opinion isn’t conflated into fact. In the end, the choice is up to the individual. It’s up to us to choose wisely.