Social Distancing, the Planets, and the Person Inside 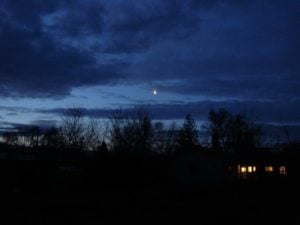 Hello! It’s so good to see you, or at least to imagine that I’m seeing you. Are you enjoying Social Distancing? Not so much? Same here. It’s not that I mind spending lots of time at home by myself- –

Hey, don’t forget about me!

Thank. You. Lily. How could anyone forget their inner fourteen-year-old?

I don’t know, but it sure sounds like you did.

For crying out loud, stop pouting. I’ll admit, this voluntary seclusion thing is making me crabby. As I was saying, I don’t mind spending lots of time at home with Lily. What I don’t like is being told I have to do it.

If you, too, are confined with an inner or outer fourteen-year-old at this challenging time, you have my sympathy. It’s not that Lily has ceased to be a joy in my life, it’s just hard not to get on each other’s nerves when what we’re allowed to do changes every couple of hours, even more so when we hear bulletins about the spread of sickness and death. A little uncertainty goes a long way in this household. And right now, we’re faced with the necessity of entertaining ourselves.

Like everyone else in the world we had plans to do things that are now cancelled. We planned to attend two concerts last Sunday, maybe see a movie sometime this week. Both concerts were cancelled and the multiplex movie house is closed. Even winter trimester at Walla Walla Community College was shortened by 2 days!

That was kind of a good thing, though.

Kind of. The final, scheduled to happen two days after the “online instruction only” mandate went into effect, was cancelled on account of it being an oral interview format (Spanish 121, as you may recall). The prof opted to base grades on work completed to-date. After a brief written exam on Monday and the recitation of the first 50 decimal places of Pi in Spanish for extra credit (I set mine to the tune of “El Paso”), we were done. I was relieved to be out of the small, windowless classroom shared with 19 others, but also sad that I didn’t have to be a grownup and face the challenge of the oral exam that I’d been actively fearing for weeks.

I guess liking challenges is an acquired taste, Lily. I would have agreed with you completely when I was fourteen.

After class let out I buried my sorrow in a new (socially distant) activity: the Planet Walk at Fort Walla Walla Museum!

I know, and we never would have found out about it if the Spanish prof hadn’t mentioned it. One of our projects last week (which seems a lifetime ago) was applying our knowledge of prepositions in describing our solar system. Part of the project was a Planet Walk the prof had set up in a long hallway on campus. Paper cutouts of the Sun and the planets were placed in a scaled-down version of the real distances between them. The prof has a special liking for Pluto, even though it’s no longer considered a planet. We looked out a window at the end of the hallway to the roof of another building to see it!

But that’s not when we heard about the Planet Walk at Fort Walla Walla.

True, though he may have said it in Spanish and I missed it. As it happened, I’d been reading a Carl Sagan biography. After Sagan died a memorial Planet Walk was set up in Ithaca, New York, where he lived for many years. I mentioned this to the prof, and that’s when he told me about the Planet Walk at Fort Walla Walla.

The Fort’s at one end. The trail goes all the way to the Children’s Museum.

The pleasant, paved walk of .9 miles adds up to nearly two miles there and back. Along the path, spheres mounted on poles- -Sun, Mercury, Venus, Earth, Mars, Jupiter, Saturn, Uranus and Neptune. Poor Pluto is mentioned on the interpretive signage as being at the relative distance (from trail’s end) of Jefferson Park, a couple of blocks away.

We’ve lived in town for two years and I’m crazy about the planets. Why didn’t we know about this before?

I guess it just wasn’t time for us to know until now, Lily. And it’s a wonderful time for this happy surprise! We’ve been twice this week. When social distancing requirements lift and people come to visit again we will definitely share it with them. For more information about the trail go to:

If you look closely at the left side of the trail photograph, you can see the Sun, Mercury, Venus, Earth and Mars! Or, as we say in Spanish, El Sol, Mercurio, Venus, La Tierra y Marte.

The overhanging gloom of the global pandemic is difficult to escape- -the worry, the cancellations, the updates, the uncertainty, the bizarre hoarding of disinfectant and toilet paper. It’s more important than ever to keep our eyes open for things that surprise and delight. Like families out walking together on a sunny weekday afternoon, the quieter streets and cleaner air since people aren’t running around so much. Like all those people you’ve reached out to from a distance, and the ones who’ve reached out to you to see if you’re okay.

For now, we are okay.