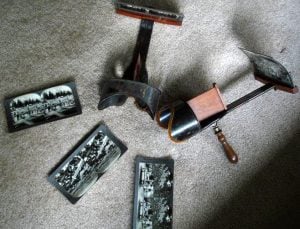 Words are funny things. Sometimes the wrong word ends up widely used for a specific person, place or thing. Writers must be extremely careful about this type of misuse. For example, today’s blog was supposed to be about a 19th century invention called the stereopticon. Or so I thought. Turns out, that cool thing in the handsome box in our living room is not a stereopticon: it’s a stereoscope.

According to Wikipedia, a stereoscope is “a device for viewing a stereoscopic pair of separate images, depicting left-eye and right-eye views of the same scene, as a single three-dimensional image.” If you had a View-Master when you were a kid, you owned a type of stereoscope. The View-Master used thin cardboard disks of small color photographs that, when viewed through the eyepieces, created a 3-D picture. This invention was introduced at the 1939 New York World’s Fair and was one exciting step up from traditional scenic postcards. Stereoscope subjects were, more often than not, exotic travel destinations. My first memory of using a View-Master dates from the 1960s. The subject was Disneyland.

The first stereoscope, the Wheatstone, was invented by Sir Charles Wheatstone in 1838. You can see a picture of it here: https://en.wikipedia.org/wiki/Stereoscope . It involved a pair of mirrors (and possibly some smoke). David Brewster invented the lens-based stereoscope later in that century, followed by the Holmes stereoscope, a streamlined version of Brewster’s invention crafted by Oliver Wendell Holmes in 1861.

Our stereoscope, something my husband acquired from his parents, is the Holmes variety. If you’ve been fortunate enough to use one of these, or if you tap your memories of View-Master operation, what feeling occurs to you? To me, it’s the sense that I was there. It was a thrill to experience being in Tomorrow Land, imagining my sneaker-clad feet on sun-drenched pavement and Rocket Jets swirling overhead. Or drifting along in a Storybook Land canal boat. Or swooping above Neverland like Peter Pan in a sailing ship gondola. It was a much more immediate sensation than watching a television documentary about the fabled theme park on Walt Disney’s Wonderful World of Color (1961-1969).

In short, it was an early version of virtual reality. Which reminds me. . .

A stereopticon, in case you are wondering, is a slide projector, sometimes called a “magic lantern,” with two lenses (one usually above the other). Slide shows were a popular form of entertainment and education in the days before moving pictures (aka “movies”). The images projected by a stereopticon are not three-dimensional.

As different from a stereoscope as margarine is from butter.