Survivors and the People Inside 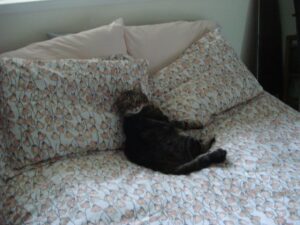 Hoosegow, sole survivor of all our animal family that moved to Walla Walla in 2018.

New week, new circumstances. Hoosegow and I are survivors.

The past three and a half years have, in some ways, been our own private reality TV show. When we moved to Walla Walla there were 7 in our household. Now our herd has been winnowed to two.Two humans, four cats and a dog is now one human and one cat. Plus the people inside, of course.

Today I face the solemn duty of retrieving Friday’s ashes. He will join Bruce, Grizzy, Doc and Piebald, who preceded him across the Rainbow Bridge from this address, plus Big Sam (malamute), Zorro (feral cat convert), Moses (mixed breed with strong proportions of Chow and Norwegian Elkhound) and Arial (tortoiseshell kitty Queen) in our domestic mini columbaria, aka Grandma Mary’s secretary desk. 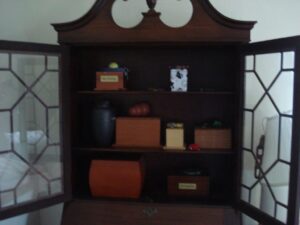 Funerary collection, curated by the survivors.

The secretary desk is in the master bedroom. Some may find this an odd location for such an installation, but it makes perfect sense to me: all of these folks are at rest, and the bedroom is a place of rest.

That’s certainly where Hoosegow and I catch our 40 winks- -in the master bedroom, that is, not in the secretary desk. As the others have crossed to the other side, we have made changes in our world, too.

It took me a while to realize that I can now sleep in the middle of the bed if I so choose. Hoosegow is a much quicker study. For daytime slumber, he now takes Friday’s former position up by the pillows, rather than on his special throw blanket at the foot of the bed.

Some adjustments, like sleeping arrangements, have been relatively easy to make. Other aspects of our survivor state are trickier to navigate. Reading the message that Friday’s ashes are ready to be picked up made me recognize anew that he really is dead. The past couple of days I’ve noticed Hoosegow sniffing around at places in the house that Friday used to frequent, as if to verify the scent of his former housemate and sometime rival is fading.

It hasn’t been quite two weeks since Friday’s passing, and there’s a piece of domestic animal lore that says dogs and cats take two weeks to adjust to major changes in their lives. Over the years, more than one veterinarian has said “two weeks” when prescribing a change in environment or diet. Arial, in fact, trained Zorro on this timeline: when she at last coaxed him into the house, way back when it was just the three of us living on Hancock Street in Port Townsend, WA, she strictly enforced her order that he remain behind the washer and drier for two weeks! Not one day more or less.

Does that mean you’ll be used to Friday being gone by the end of the day on Saturday?

I doubt it, 9, and I don’t think the vet lore is intended to apply to humans, especially ones like me who get fixated on the dates of significant events. But maybe a switch will flip for Hoosegow.

Here’s something I do find comfort in, though. Bruce is on the other side to receive with the new arrivals and reunite with the ones who went before him. I picture him in a celestial recliner with all of them cuddled up on him- -well, maybe Sam and Moses are curled up alongside the recliner as, combined, they easily outweighed Bruce. The vision makes a lovely family portrait.

I confess that I resent Bruce for having so many more of our kids now than I do. Survivor’s envy, instead of survivor’s guilt! But I am also glad to still be on this side. I miss them all, but there’s so much to do here that’s interesting! Like reconnecting with the two of you.

The more of us that are present, the more we nudge each other to keep moving, keep exploring, keep doing our best. Lily, I don’t think I would have bought a new sundress last year if you hadn’t brought it to my attention that an update was due.

It doesn’t take a genius to see that you, left to your own devices, rarely think of fashion.

And 9, you remind me of how much in life there is still to see.

As in, you could see your way to getting us more chocolate chip cookies than you do now?

Careful about making that kind of observation to teachers, 9, it could (and did) lead to some interesting comments on future report cards. Hopefully today’s grade school teachers are more relaxed about their students displaying a sense of humor.

All creatures exist on a continuum of life and loss. When a hard loss comes, thanks to 9 and Lily, I remember that I survived fourth grade and also survived being fourteen. Heartache knows no age. The magic comes in when we move forward, with remembrance and sometimes sorrow, but forward.