Susanalia with the Person Inside 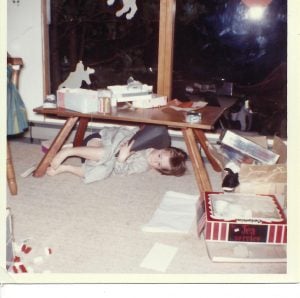 I have never had a high tolerance for parties given in my honor. Late in the day of my fourth birthday, November 1, 1963. A far cry from Susanalia!

What do you do in the week leading up to your 60th birthday? This year it’s a bit strange, as it is not only the first year without Bruce, but also the time of year when, just last year, we were starting to understand how sick he was. I feel like being mostly on my own this week, but if I don’t honor my birthday in some way I know I’ll, at some point, get unhappy and upset, so. . .I’ve taken charge of the situation and declared this week “Susanalia”!

That sounds really weird, in a good way. What is Susanalia?

That’s Lily, my inner fourteen-year-old. She knows about a lot of things but maybe she’s never heard of Saturnalia. According to one of the online dictionaries, Saturnalia is “the ancient Roman festival of (the Roman god) Saturn in December, which was a period of general merrymaking and was the predecessor of Christmas.”

As such, last Saturday I went on a tour of local historic cemeteries, not the kind with well-manicured grounds and balloons mixed in with real and artificial flowers, but more-or-less abandoned burial spots, tiny islands within vast wheat fields for which access must be permitted by the farmer who owns the surrounding land. Who is buried in these places? Mostly, Walla Walla’s early pioneers. The tour was organized by Walla Walla Historic Cemeteries, whose mission is to protect and maintain historic cemeteries in Walla Walla County. You can learn more about them here: https://www.wwhistoriccemeteries.org/ 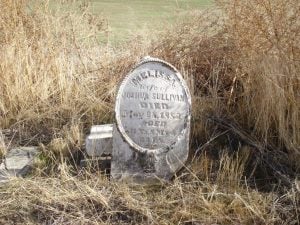 Marker in the Rose Cemetery, Walla Walla County. Note the wheat field in the distance. A picturesque location for celebrating Susanalia!

Sunday I had an obligation to fulfill, the end-of-season party for Fort Walla Walla Living History. Since this volunteer activity was something I’d chosen for myself and have thoroughly enjoyed, it was a good fit for Susanalia. About a dozen of us made brief presentations as our historic characters. It was a chance for me to revisit Matilda Sager Delaney and tell a story that I’d touched on in my regular presentation, a story within the Whitman Massacre history that was too long to go into considering the other information I had to cover. It was also an opportunity to talk with audience members, get to know the other performers and nibble delicious snacks. 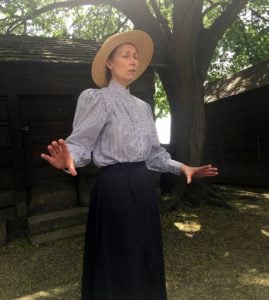 Matilda Sager Delaney, a little piece of role reversal (or, at least, being someone different) for Susanalia. Matilda was at Fort Walla Walla Museum on October 27.

General merrymaking, indeed! Monday I was worn out, having not only tromped through overgrown cemeteries and time traveled back to 1898, I’d also just returned from four days of Bruce-related festivities in Reno. Since Susanalia is my festival, I spent Monday at home, eating healthy meals and coddling the 4-legged kids who were feeling neglected as only 4-legged kids can. It was also a time to rev up for the rest of the week: a new Living History character to research in the Penrose Library archives on Tuesday, lunch out and a massage on Wednesday, Halloween on Thursday. Which brings me to role reversal.

Hmmm, that almost sounds like criticism. Neither one, Lily. Last week I bought myself an inexpensive set of costume ears. On Halloween, I’m going to trade places with the cats! (or at least look like one). This takes me 50+ years back to a specific Halloween. I was being peevish about how I was going to dress for Trick-or-Treating. None of the normal stuff would suit. In the end, I wore a cape and Mom painted whiskers on my face, as I’d insisted on being a Kitty Princess. 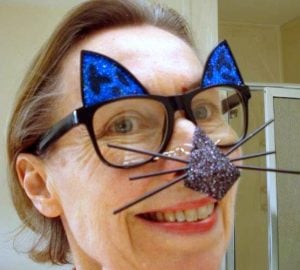 Selfie at 60: a stylish new set of cat ears arrived in the mail yesterday, just in time for Susanalia!

Have I bought myself a present? Yes, and I’ve wrapped it, too. Will I bake myself a cake? Yes, something called an Irish Plum Cake (which, ironically, contains no plums). Will I go out for a meal on “the” day? Yes, I have plans for lunch with Cousin Carla, followed by a visit to the College Cellars tasting room at Walla Walla Community College (they have a dandy viticulture program, well-suited to this county of 100+ wineries). And, on my birthday, I am launching a new writing project, details TBA in next week’s blog.

All of this stuff sounds okay, but aren’t you supposed to do something special on birthdays with zeroes on the end?

Ah, but I am doing something special, Lily, every single day this week and every single day forever. That’s part of the magic of turning sixty, especially when you can still be fourteen on the inside.

Whatever. I refuse to get any older.

Thanks, Lily. I can’t think of a better gift.